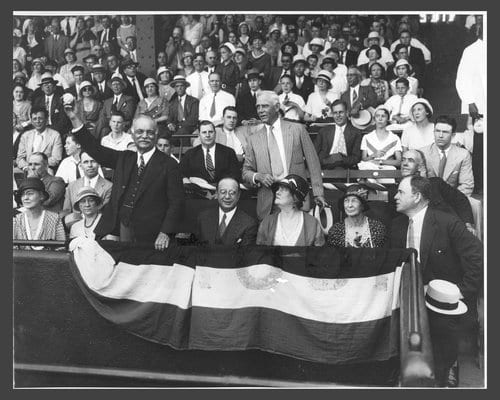 Earlier this month, Elizabeth Warren thought she put her “Pocahontas” title to rest by taking a DNA test that indicated she had Native American ancestry. Rather than end the running joke, the test results seem to have only made matters worse for the Massachusetts Senator and 2020 hopeful. The tests showed that Warren was anywhere between 1/64 and 1/1,024th Native American, the smallest end of that spectrum is lower than the average white American.

The Cherokee Nation issued a statement against Warren’s DNA test political play, calling it “useless” and undermining tribal interests. Were Warren to be elected president in the future, she certainly would not be America’s first Native President. The United States has never had a Native American President, though an often forgotten Native American once ascended to the second highest elected office in the land.

Herbert Hoover’s Vice President, Charles Curtis, was a member of the Kaw nation who was 3/8ths Native American, and was just a heartbeat away from being President of the United States. Curtis was born in 1860, the son of a mixed Native woman (Kaw, Osage, Potawatomi, and French) and a White man. Curtis’ mother passed away when he was very young, and his father was off fighting for the Union in the Civil War. As a result, Curtis lived with his grandparents on the Kaw Reservation at Council Grove, where Curtis spoke French and Kaw as his first languages. He was fully immersed in the Kaw culture.

While still a child, Curtis once ran 60 miles from the reservation to Topeka to inform the government that the reservation had been attacked by Cheyenne raiders. Curtis also became a skilled jockey while a child and earned the Nickname “Indian Boy.”

At 16, Curtis moved to Topeka with his paternal grandmother where he attended high school and operated a taxi carriage. At 21, Curtis was admitted to the Kansas bar, despite no formal legal education (he studied while waiting for his carriage clients). Curtis opened a law firm and began practicing criminal law, though his sights were set on politics.

In 1884 he was elected as the Shawnee County Attorney, and quickly ascended to the House of Representatives in 1892. He remained in the House of Representatives consecutively until 1907, when the State Legislature elected him to the Senate. He was pushed out in 1913, due to his conservative politics, but was elected again in 1914, the first direct popular election of Senators.

Curtis continued to serve in the Senate until he took office as Vice President under Herbert Hoover. Prior the Republican Convention, Curtis had a bid to become President, though he spent most of his time continuing to work in the Senate rather than focus on campaigning. At the convention, Hoover handily was selected as the candidate, and Curtis was selected to boost popularity in farm states, where Hoover was unpopular due to his opposition to the McNary-Haugen Farm Relief Act. Hoover and Curtis weren’t particularly fond of each other, and the selection was only to make the ticket stronger.

Hoover handily won the general election against Catholic Al Smith, winning forty of the forty-eight states, including all of the Mid-West. After the election, Curtis was relegated to the sidelines, and accomplished little as Vice President beyond casting a few tiebreaker votes and opening the 1932 Olympics.

When Hoover was handily defeated by FDR in 1932, Charles Curtis’ political career was largely over. He still advised Republican candidates and remained in Washington. Curtis died in February of 1936 of a heart attack, and his legacy has largely been forgotten since.

Curtis was truly a momentous figure in American politics. He broke many glass ceilings; he was also the first Senate Majority Leader and Whip with Native heritage. His politics can be seen as a combination of the progressive and conservative elements of the Republican Party at the turn of the Century. Curtis was a staunch proponent of Women’s Suffrage and Prohibition, while also supporting tariffs and the Gold Standard.

With all of these accomplishments, Curtis’ is most often remembered for his politics in relationship to Native American tribal rights and recognition. Curtis’ played an integral role in transforming Indian Territory into Oklahoma, and dissolving Indigenous autonomy. The Curtis Act of 1898 was the central piece of legislation that led to the end of Native rule in Oklahoma. The legislation expanded the Dawes Act of 1887 to the Five Civilized Tribes (Cherokee, Chickasaw, Choctaw, Muscogee Creek, and Seminole). This act abolished tribal courts, ended collective tribal ownership of lands in favor of individual Natives being allotted lands. It also made it so all tribal legislation would need to be approved by the federal government. Public schools and voting rights were given to Natives through this act as well, as they were now full citizens of the United States.

Curtis believed what he was doing was the right thing, that individualism and assimilation were the way forward for Native Americans. Critics of Curtis say that his efforts were detrimental to Native Americans, and many tribal leaders at the time opposed the Act as it would further destroy Native Autonomy and would lead to further marginalization and erasure of Native peoples and cultures.

Even with this mixed legacy, Curtis is not a figure who should be forgotten. Despite being seen as a controversial and even traitorous figure to Native Americans, his impact on U.S. policy and his ascent to the second highest office in the land is a testament to his dedication to the country and his ability to overcome racist ideas of the time. Perhaps Elizabeth Warren could use a history lesson.

Much of the research for this piece came from the Senate Historical Office.