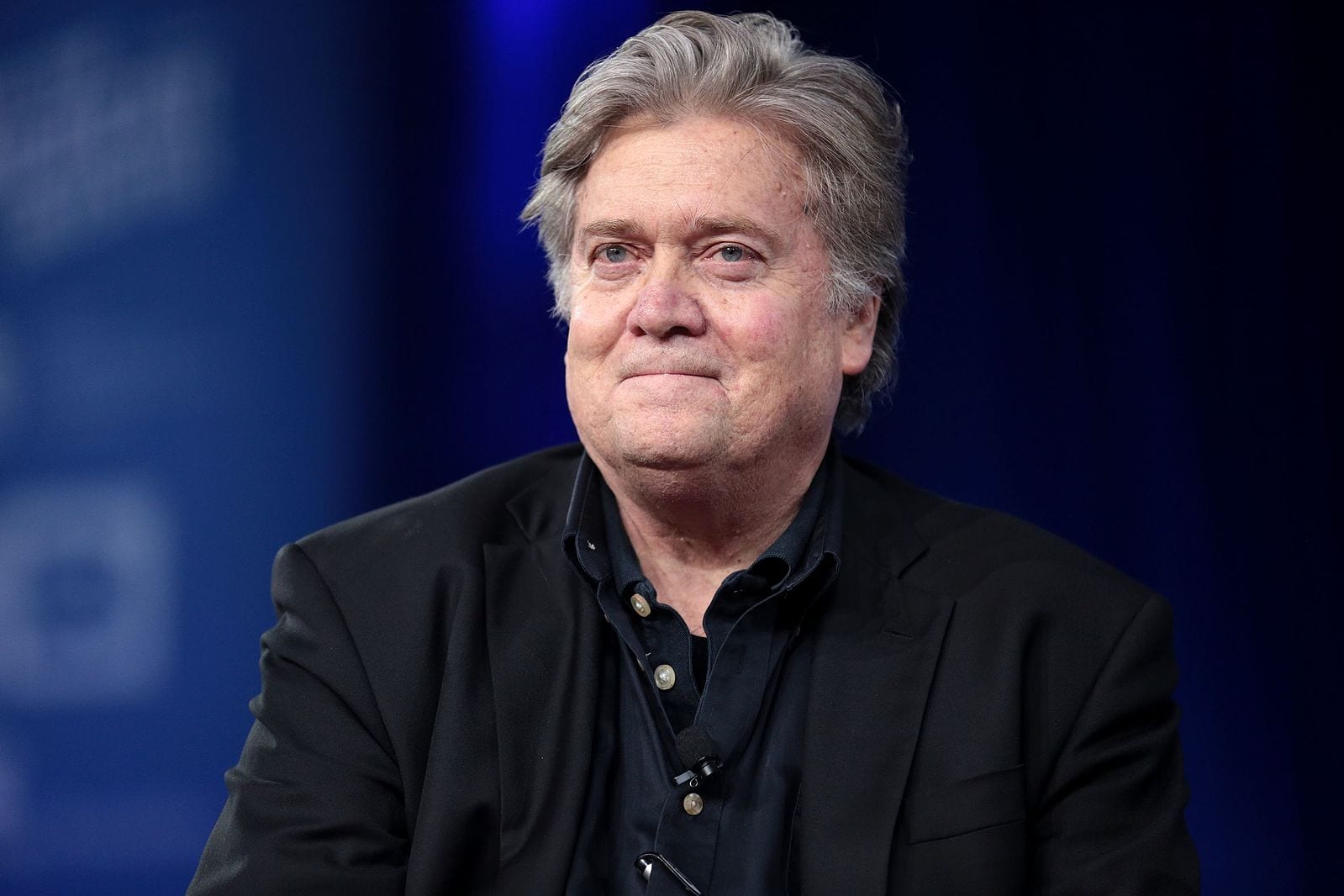 Unsurprisingly, there is a media lynch mob out there waiting to tar and feather Steve Bannon. Count me out, I have no need to join the herd of hyenas, independent minds every man and woman of them.

Steve Bannon took over Breitbart News some time after the sad, premature death of its founder, Andrew Breitbart. Retired Navy, Wall Street, film making, Bannon brought to his versatile and restless talents the pugnacious spirit that you find in James Webb and the Scotch-Irish frontier ethos he writes about. As it happens, Bannon comes out of a different, though related, tradition, epitomized in military units like the Union’s Irish Brigade and its Great War heirs of the 69th New York. Bannon, to borrow the title of one of Jim Webb’s books, was born fighting.

Whether Bannon saved Trump’s presidential campaign when it was wilting in the heat of 2016’s summer remains for political historians of the future to figure out. The noise and the hysteria were such that it is difficult, even more than a year later, to know who made the right calls in terms of script, improv, and just plain guts. Barring some definitive archival and documentary evidence, I think it is safe to say the Trump campaign was won by Donald Trump.

However, no one disputes that through election day, the Candidate and the on-leave Breitbart CEO got along and developed, by all accounts, esteem for each other.

It probably matters little who suggested what themes to push, because they agreed on what the electorate wanted to hear; and they agreed it was what they, too, wanted to hear: here are some basic points about what has gone wrong in our country and why the establishment cannot or does not want to fix it, so let’s say it.

It was, above all, the saying it that did it. What the anti-Trumps left and right still do not understand is that however a tall-teller the man is, he hit, again and again — and still does — on what the American people know is the real truth, however impolitely said, and they also know that their political and media elites have been failing to do this.

Maybe Bannon would have preferred a Webb candidacy. Jim Webb, Virginia’s retired senator who as a Marine fought in Vietnam, dropped out after a brief foray into the Democratic Party primaries, so that was out. But another candidate with a program that could be described as Jacksonian, which was the basis of Webb’s political thinking, was roaring through the Republican primaries.

The sensible thing for the victors would have been, as we suggested at the time, to pack some blazers and sports equipment, go to Bermuda or Florida for a few weeks, and consider the situation. The voters’ Jacksonian message was a shock. In some regards, it was as if Goldwater had won in 1964, or Taft in 1952. But it was no ephemeral phenomenon.

After such a political event, you do not fall for clichés like “hundred days.” You ask yourself: maybe the American voters know — and expect — more about what we articulated than we do ourselves? The better part of wisdom would have been to do nothing for a hundred days, maybe two hundred, and then roll out some heavy ammunition to bust the ramparts erected by those, domestic and foreign, who do not view our Republic as the last, best hope on earth.

But, okay, we at TAS do not believe in nyahnyah-we-told-you-so. Some of us even had misgivings about Donald Trump. But we viewed with alarm the persistence of a never-ending never-Trump reflex among otherwise sensible people, which threatened to subvert the basic trust in our system that is needed for constitutional order. This was qualitatively different from challenging the winner’s program. All programs are challengeable in a free society.

No, we thought the anti-Trumps would be well advised to go somewhere — they could have gone to a resort in Bermuda or Florida and invited the pro-Trumps nearby to tea and tennis parties, or even musical soirées and seminars on Important Questions, debates between free traders and economic nationalists, optimists and pessimists.

Some observers may want to view the Trump-Bannon fracas is evidence that we misjudged the sheer incompetence of the new administration. We would reply that attacking an administration that is having as successful a first year as this one is a rather sorry way to try to change the topic. Or rather not change it, by trying to stick on the false alarms that were raised right after the vote: illegitimacy, vulgarity, boorishness, and other questions of character.

The knock-down shouting match between the prez and his ex-advisor is what friends do, as per any good Western movie, wherein the two leading men, played typically by Dean Martin and John Wayne, slug it out in the bar (breaking those big mirrors they always have and many bottles of bourbon, plus several tables and chairs), then exchange some witticisms and go out and shoot down the bad guys, played by Lee J. Cobb and Jack Palance.

This is not terribly interesting news.

Bannon is alleged to be a backstabbing SOB. I would not know, though I will say — full disclosure oblige — he was so-so in his media mogul gig. First of all, as his tennis correspondent, he owes me. But cheapness is not unique to him — or almost anyone — in this business. I once worked under the great Roger Wood as an op-ed editor. Unfortunately for me, it was the beginning of a long line of cheapskates in this grand and rotten business that is news dissemination.

The stupidities, the cheapness, the venalities, the villainies, the ugly little pettiness, that go on in any newsroom are beyond counting, but at Roger Wood’s Post it was fun as could be and it was New York and the paper, against all odds and all predictions by the bien-pensant elites of the city, overtook them all — notably the Daily News and Newsday — became the most-read paper in the city, and spawned such strange beasts (cf. W.B. Yeats, “The Second Coming,” coda) as Fox News and its gaggles of babblers.

Well, this is neither here nor there, but Roger Wood was a pro. He was sly and ruthless and funny and sort of cute in an evil way, not handsome but elegant. He knew everything, read everything, and cut to the nerve of an issue faster than most. He was a newspaperman, old school. Rupert Murdoch appreciated him, and what more can any man in this racket hope for by way of accolade?

So again, no news here either, and that’s off the table.

Backstabbing, betraying, lying, and all that? Well, who knows what has been going on in the White House? Here again, I perhaps have a right to feel betrayed, additional to being stiffed. But it is no big deal. The issue is not me, but the country’s governance. If you want to know, those guys were supposed to get me a job as the director of the White House Tennis Courts. Maybe it is run by the Park Service, but still, I could get one of those executive appointments, no? Mr. Tyrrell, I am assured, passed the word on to Steve Bannon — “or someone close to him,” he added by way of giving himself a loophole — and did I hear back? I would be trading forehands downtown with General Kelly if I had.

Stiffers, disloyalers, what else? Oh! Bannon is accused of being a neo-Confederate, even a neo-Nazi. Well now. The anti-Trump press does not know if it should thank Trump for canning him or say it makes no difference because the prez himself is a neo-Confederate (albeit from New York?) and a neo-Nazi.

This is why I think that, in addition to the Trump party and the anti-Trump party, the press itself, or some of its Representative Men (and Women) should hark to Bermuda or Florida and — you know the rest. They could go to the Poynter Institute in Florida and take a refresher on elementary rules of journalism. I say Representative Men (and Women) because obviously no tightwad publisher is going to let his entire staff take a week (or even a weekend) in Bermuda and anyway someone has to write the headlines. But the press being a herd of independent minds, if you can get them at the top, the hordes will follow.

[Pedantic footnote: the reference to a herd of cattle is Harold Rosenberg’s; he was not specifically referring to the press, but his bon mot often is applied to self-regarding newsmen (and women).]

Now if you are still with me, we’ve got everybody out on Bermuda or a Florida swamp and… the country can breathe!

While we are on the topic of foreign affairs — but are we? — I see where the most ardent supporters of Saudi Arabia’s Great Reformer, the cool young Prince Mohammed Bin Salman (Sal’s boy Mo, if he were from the Bronx) are liberals. From Thomas “Flat Earth” Friedman on down to David “Gotham’s Goliath” Remnick, all the 48-hour experts who parachute into Riyadh and see everybody who approves their preconceptions, belong to the liberal camp when they are not isolationists. The two are remarkably similar when it comes to blaming America first and tut-tutting suggestions that our enemies want us dead.

If the long-awaited Luther moment in Islam is about to take place in Riyadh, bless ’em, bless ’em all. But does anyone really know? How about some of the old shoe leather work? What if this cool cat prince is a late model Peter the Great or Ivan the Terrible? Top-down reformers are always bad news, and until some reporters out there do their job, there is the nagging suspicion that the best perception of what this fellow is really up to was expressed by Doug Bandow in these pages: this reform business resembles nothing so much as a mafia dustup on how to split the take.

Saudi Arabia is only an example, there are so many topics the media could be studying other than the bowels of the administration and their movement. These are not important, no, but after a year of this, we’re getting a stale smell and it is not pleasant.

So our advice is: Get your heads screwed on right, go to Bermuda and come on back, we’re Americans here, carry on!

*And, General Kelly — or Mr. or Mrs. Kushner — or whoever’s in charge, don’t forget about those tennis courts.