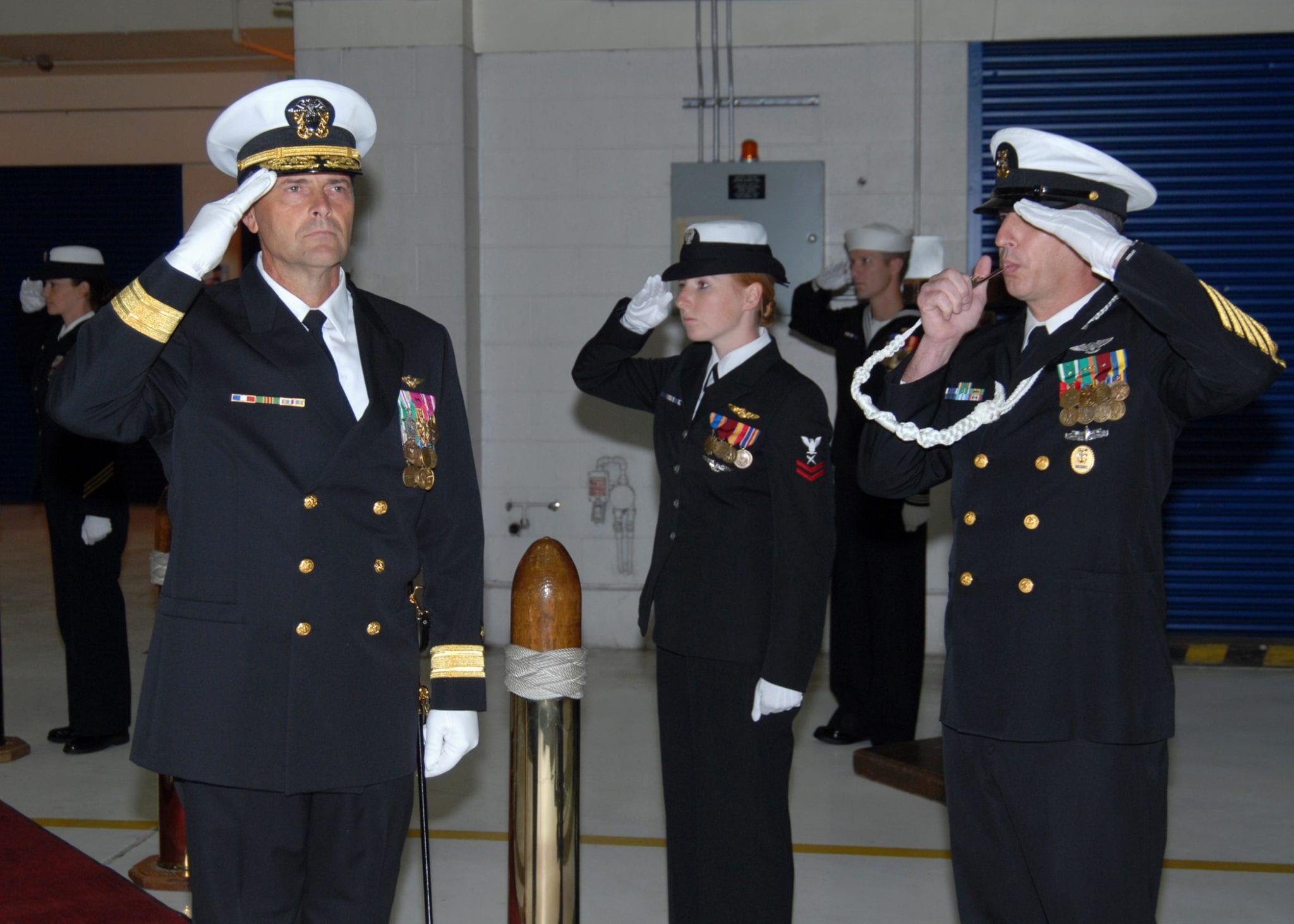 The strains of almost eighteen years of continuous war, Obama’s massive budget cuts, and a tide of damaging politics have eroded critical parts of our military. What has held together, until last week, was the most critical element: the trust that must exist between the civilian leadership and the military of all ranks.

A huge blow to that trust has just occurred on Secretary of the Navy Richard Spencer’s watch. Another failure of leadership, both similar and different, is taking place about the nomination of Gen. John Hyten, Commander of U.S. Strategic Command, to be the next vice chairman of the joint chiefs of staff.

On May 24, the Senate confirmed Adm. William Moran to be the next Chief of Naval Operations, the top officer in the Navy. On July 7, after a meeting with Spencer, Moran agreed to retire instead of taking his new post. What happened between those two dates to force Moran out?

Last week, Air Force Gen. John Hyten was accused by an anonymous “senior military officer” of sexual misconduct toward her. Will Hyten be forced out, too?

What is being done to Hyten is the same political smear that Democrats used to try to prevent Justice Brett Kavanaugh from being confirmed to the Supreme Court. What was done to Adm. Moran is vastly different and goes far beyond political correctness. It appears to be a breach of faith between the civilian and military leadership of the Navy.

Part of any senior officer’s job is the mentoring of junior personnel. Adm. Moran was reportedly the mentor of Commander Chris Servello for about a decade. Servello served for a time as Moran’s public affairs officer, his link to the media.

Servello was accused of sexual misconduct after a boozy Christmas party for public affairs officers in 2016 when he portrayed Santa Claus. The misconduct cited was making passes at different women and slapping one on the backside.

The Navy’s investigation concluded and no charges were brought against Servello. He was not court martialed or given non-judicial punishment — not even a letter of reprimand. Nevertheless, he was forced to retire from the Navy.

Perhaps Servello chose to retire rather than face court martial or lesser punishment. And perhaps the Navy wanted to get out of the incident without exposing any more of its media mavens to investigation.

After Servello retired, Moran stayed in touch with him. When he was nominated for CNO, Moran reportedly asked Servello for advice on handling the media during the confirmation process. That consultation led someone, perhaps a senator, another admiral, or Spencer himself to accuse Moran of showing bad judgment. That was Spencer’s rationale in apparently forcing Moran’s decision to retire rather than become the next Chief of Naval Operations.

Stop there. Moran was never accused of misconduct. Servello evidently misbehaved at the Christmas party, but not badly enough to be disciplined for it. Put plainly, Servello wasn’t guilty of any crime, even “conduct unbecoming,” the catch-all provision in the Uniform Code of Military Justice.

Maybe the Navy wanted to sweep the whole matter into the dustbin and Servello was convinced to retire quietly.

There is absolutely nothing in what Servello did, or in Moran’s maintaining a professional relationship with Servello, that justifies preventing Moran from becoming our next boss of the Navy.

Was Spencer called by a senator or two demanding that Moran be retired despite his confirmation? Did an admiral or two with some grudge against Moran collude with Spencer to force Moran’s retirement?

We don’t know the answer to those questions, but another inevitably arises. Is Spencer the right man to be our next secretary of defense?

The Pentagon’s top job hasn’t been filled since James Mattis quit in January. Pat Shanahan, his deputy, was acting SECDEF until he withdrew his nomination because of a domestic incident. Army Secretary Mark Esper has been nominated for SECDEF and is acting in that job. But a quirk in the law requires that Esper not be acting SECDEF while his nomination is being considered by the Senate, as it soon will be.

President Trump has indicated that Richard Spencer will be acting SECDEF while Esper quits the job temporarily to get confirmed. The facts surrounding the forced retirement of Adm. Moran make that a very bad idea.

After meeting with Moran, Spencer issued a surprising statement on Sunday announcing Moran’s retirement. It said that Moran’s continued professional relationship with Servello,“an individual who was held accountable and counseled for failing to meet the values and standards of the Navy profession” called Moran’s judgment into question. Nonsense.

Spencer’s apparent removal of Moran is not just political correctness gone mad. It’s something worse. It’s a betrayal of the trust that military men and women have, and have to rely on, in the civilians who control the military.

That trust has been violated from time to time. The Moran retirement is the worst since the “Tailhook” scandal of 1991. At a convention of the Tailhook Association, a fraternity of Navy and Marine pilots more than 80 women were subjected to various kinds of sexual abuse. The Secretary of the Navy, Henry Garrett, and the Chief of Naval Operations, Adm. Frank Kelso, were both fired. At least 100 men were disciplined in various ways, and many more were refused further promotion.

But it didn’t end there. The feministas on Capitol Hill, led by then-Reps. Barbara Boxer and Patsy Schroeder, went after other Tailhook members and demanded that they be punished as well. One was Blue Angels flight leader Cmdr. Bob Stumpf. Stumpf was investigated, found innocent of any wrongdoing, and resigned from the Navy in 1996. The Navy’s then-new civilian leaders betrayed Stumpf’s — and others’ — trust.

Civilian control of the military is essential to democracy. Without it, the military will either atrophy to the point of ineffectiveness or grow too powerful as a Praetorian Guard. Trust between the military’s members and their civilian leadership prevents either result. That trust has been damaged severely by Moran’s forced retirement.

The accusation of sexual misconduct against Gen. Hyten sounds a lot like the allegation against Supreme Court Justice Brett Kavanaugh during his confirmation.

The attempt to derail Kavanaugh was based on a decades-old accusation that he had molested another teenager at a college party. There were no witnesses, no forensic evidence, and, in sum, no reason to believe the accuser, Christine Blasey Ford. Nevertheless, the Democrats on the Judiciary Committee insisted that she was more truthful than Kavanaugh and pilloried him in hearings that were a new low in the confirmation process.

Hyten has similarly been accused by a female Army colonel of sexual aggression and then ruining her career when she resisted him. She didn’t report Hyten’s supposed misconduct when it occurred. She only came forward when he was nominated for the vice chairman’s post. That alone raises a huge question about her credibility.

The accuser’s allegations were thoroughly investigated by the Air Force’s criminal investigators. They went through a great many emails and other documents, interviewed the people who would have had knowledge of the incident(s), and found insufficient evidence to justify her complaint against Hyten.

But that’s not enough for Democrats such as Tammy Duckworth, who says the accuser needs to testify before the Senate Armed Services Committee before Hyten can be confirmed.

We haven’t yet heard from the rest of the Democrat members of the SASC, such as Kirsten Gillibrand, one of the twenty Dems running for president. She made her bones with proposed legislation to take sexual harassment complaints out of the military chain of command and put them under a separate civilian authority. She and the rest of the usual suspects can be counted on to trash Hyten’s nomination.

Elizabeth Warren is also, God help us, a SASC member, and so are Richard Blumenthal and Mazie Hirono, who proved themselves idiots in the Kavanaugh confirmation hearings.

The Washington Post says the Hyten case isn’t politically tinged. (They would, wouldn’t they?)

I don’t know Hyten. We’ve never spoken. But I have had several occasions to quote his words in columns over the past year. From his statements, it’s clear that he’s an intense, brilliant man whose depth of knowledge of national security and defense policy has been demonstrated repeatedly. He’s the kind of person we want among our top military leaders.

President Trump needs to direct Spencer to fight for Hyten’s nomination. If he doesn’t, Spencer, as acting SECDEF, could pull the plug on his nomination.

The problem may not be entirely Spencer’s fault. Were there others who secretly connived to force Moran into retirement? Is there a problem in the military leadership, as there evidently is in the civilian leadership in the Pentagon?

At this juncture, about 20 of the top Pentagon jobs remain unfilled. Nominations either haven’t been made or have been held up in the Senate.

Meanwhile, we’re fighting wars in Iraq, Afghanistan, and many other places. (Our spec ops troops are deployed in about 80 nations.)

We can’t wait until a big war breaks out to fix what’s rotten in the Pentagon.