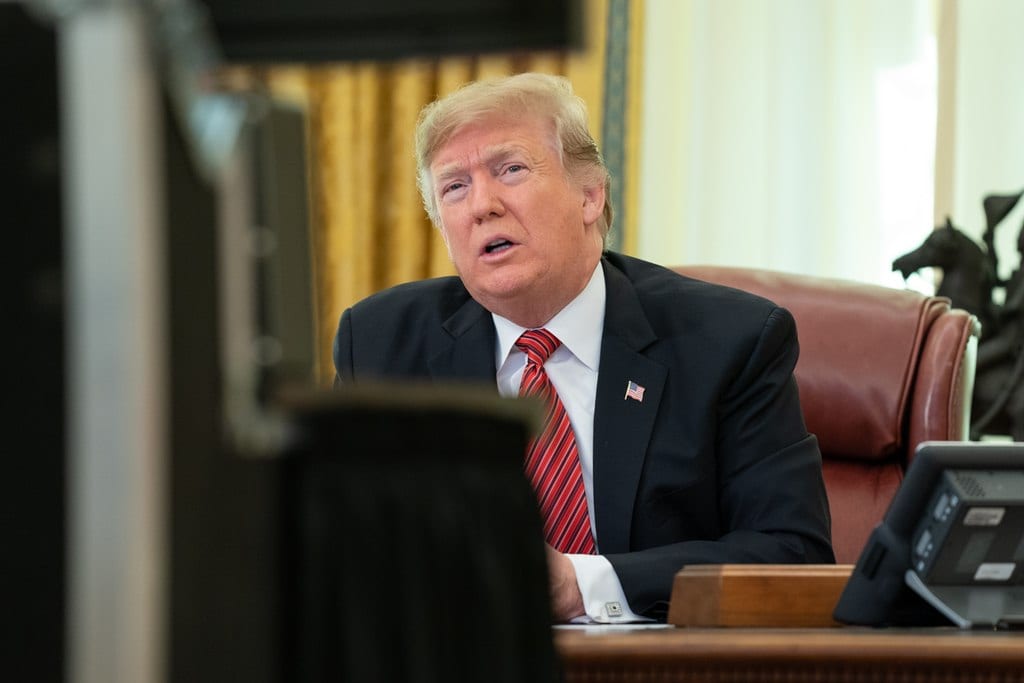 The Trump presidency is nearing its halfway mark. Contrary to the dire predictions of many pundits, the country still survives. But whether the president is able to win reelection remains a huge question. Satisfying his base is not enough. He needs to win votes from those who might not have warmed to him personally.

To attract those marginal supporters, many of whom chose him over Hillary Clinton, he should offer a few compelling “big ideas,” rationalizing his so far disjointed approach to policymaking. Make the Democrats fight him on his own ground.

Cut Corporate Welfare. One of Hillary Clinton’s great weaknesses was her membership in the infamous one percent, having acquired wealth the old-fashioned way, using political power to grab it. Denizens of Wall Street weren’t paying hundreds of thousands of dollars to hear her speeches because of the peerless wisdom and Periclean eloquence. The Clinton Foundation wasn’t vacuuming up contributions from foreign governments because of its abstemious commitment to the global good.

The president should target corporate welfare. Uncle Sam is bankrupt — sad to say, the GOP blew out the deficit last year and it will near a trillion dollars in 2019. In a decade the red ink will run over $1.5 trillion absent some serious cuts. A good place to start slashing would be with those who collect cash because of who they are, not based on need or merit.

In doing so President Trump could undermine the incipient left-wing populist opposition by challenging Democrats to cut money going to business and other well-heeled interests — Export-Import Bank, Economic Development Administration, Fannie Mae and Freddie Mac, and much more. The president should argue for a level playing field for all and explain that is why he has been cutting taxes, rolling back regulations, challenging foreign trade restrictions, and the like. One of Washington’s worst kept secrets is that Democrats are not against enriching special interests, as long as they are compliant and supportive of Democrats. Like Wall Street barons who fill Chuck Schumer’s campaign coffers and labor union leaders who do very well by pretending to do good, with government’s aid.

Defend America. The world is dangerous, but not particularly to America. The president has grasped the essential point, ignored by Obama progressives and Bush neoconservatives alike: Virtually everyone everywhere wants America to take care of their problems and otherwise do their bidding. That includes fighting their wars.

In the Middle East, for instance, Syria really isn’t America’s problem. It has been allied with Moscow for decades. So what? It isn’t much of an asset for Russia today. Yemen is even less important. That country (once two of them!) has been in turmoil for most of its half century or so of existence and turned into a sectarian fight only because the bloody, reckless Saudi crown prince planned a desert blitzkrieg without the Afrika Korps commanded by Erwin Rommel.

Having encouraged destruction of the Islamic State’s vaunted caliphate, the president is right to want Washington to hand off the remaining fight to countries directly threatened by ISIS’ activities. As for Tehran, I would put my money on Israel, with nukes, and Saudi Arabia, the world number three in military outlays. In contrast, Iran is an economic and political mess. Its armed services aren’t so hot either.

With Washington’s budget blown the president should keep asking why Americans are subsidizing rich allies who can’t be bothered to spend more for their own defense. President Emmanuel Macron wants the U.S. to stay in Syria and hopes to create a European military because he admits he doesn’t trust America, yet his country won’t spend even two percent of GDP on the armed services. Germany devotes about 1.2 percent to the military, while Italy and Spain, with substantial economies, do even less. South Korea has 50 times the GDP of North Korea but wants America to keep troops on station. Cutting back Washington’s contribution is the only way these defense welfare dependents to do more.

Stand up for the First Amendment and the values behind it. Perhaps the most important issue setting America apart from the rest of the Anglophone world as well as Europe is rigorous support for the freedom to advocate political opinions and live religious faiths. The Left once shared that commitment, but today many progressives believe the only individual liberty that matters is sexual. Do what you want, irrespective of consequences, even a baby, which, of course, unlike everyone else, has no rights. Everything else — economic, social, moral, politics, religion — should be regulated and mandated. Those who violate the liberal catechism should be treated as pariahs, exiled from universities, barred from traditional and social media, denied the opportunity to earn a living, fined and potentially even jailed. Repentance is encouraged, but only after significant groveling, highlighted by wailing and teeth-gnashing.

Of course, much of America’s discourse and many of Americans’ behaviors are not admirable. But the Founders recognized that such human beliefs and actions nevertheless should remain beyond government’s reach. The president should not advance a partisan or sectarian agenda, but rather an American agenda. People should be left alone unless they violate a very few very important rules. And the federal government should use its authority to promote an open society.

The Left has taken over universities in part through federal rule-making. The Trump administration should return the favor, only to guarantee freedom of expression. The president should propose that grants to states and localities require respect for religious liberty, which today receives lesser judicial protection than free speech. In some industrialized nations a kind of progressive fascism has developed, imposing left-wing verities on entire populations. Americans must ensure that won’t happen here.

Separate immigration from citizenship. The debate over immigration has become emotional, bitter, divisive, and unproductive. Concern over how immigrants change America and frustration with people who ignore the rules and jump the queue are understandable. Yet Washington is hurting America by barring entry of productive workers who would expand the economic pie, preventing refugees, such as Iranian Christians, from coming to the U.S., and discouraging foreign students, who end up as some of America’s greatest friends abroad, from attending U.S. schools.

The issues will always be complex and difficult, but solutions would become more possible if every proposal for “reform” did not mean millions of new citizens, empowered by the vote to change American institutions and laws. How could the president win votes for enhanced border security? Offer to liberalize legal immigration, but without citizenship. What to do about those here illegally? Allow them to work without granting any special path to citizenship. How to respond to economic pressures that drive immigrants, along with their families, from Latin America? Create temporary work visas, with no promise of citizenship. More broadly, rethink birthright citizenship. Other nations require parental citizenship, a certain number of years of residency, or other factors demonstrating one’s connection to the country, instead of one’s mother just passing through.

Challenge business, cultural, and political elites to get to know America. After the November 2016 election a journalist told me that he didn’t know anyone who voted for Trump, reminiscent of similar comments made after George McGovern’s disastrous 1972 campaign. Of course, that is almost certainly untrue, but anyone who backed Trump probably feared my friend would view treat with contempt. And if he really didn’t know any Trump supporters, it illustrates a serious problem: some people do treat middle America as “flyover” country. This attitude helps explain the strong, enduring support for someone with as many problems as The Donald.

Whatever the outcome of the 2020 campaign, Americans will need to work together. The “deplorables” know many of the wannabe progressive social engineers. How could anyone not know the latter, since they dominate most of society’s commanding heights? It is time those who view themselves as part of the natural ruling class knew some of their would-be subjects.

As the next presidential election comes into focus, politics is only going to grow even more bitter. The president needs to do more than simply repeat his old talking points. If he wants both to change America and get reelected, he needs to advance some grand new ideas.

Doug Bandow
Follow Their Stories:
View More
Doug Bandow is a Senior Fellow at the Cato Institute.
Most Popular
1
Biden Watch
Joe Biden Versus We the People
by Josh Hammer