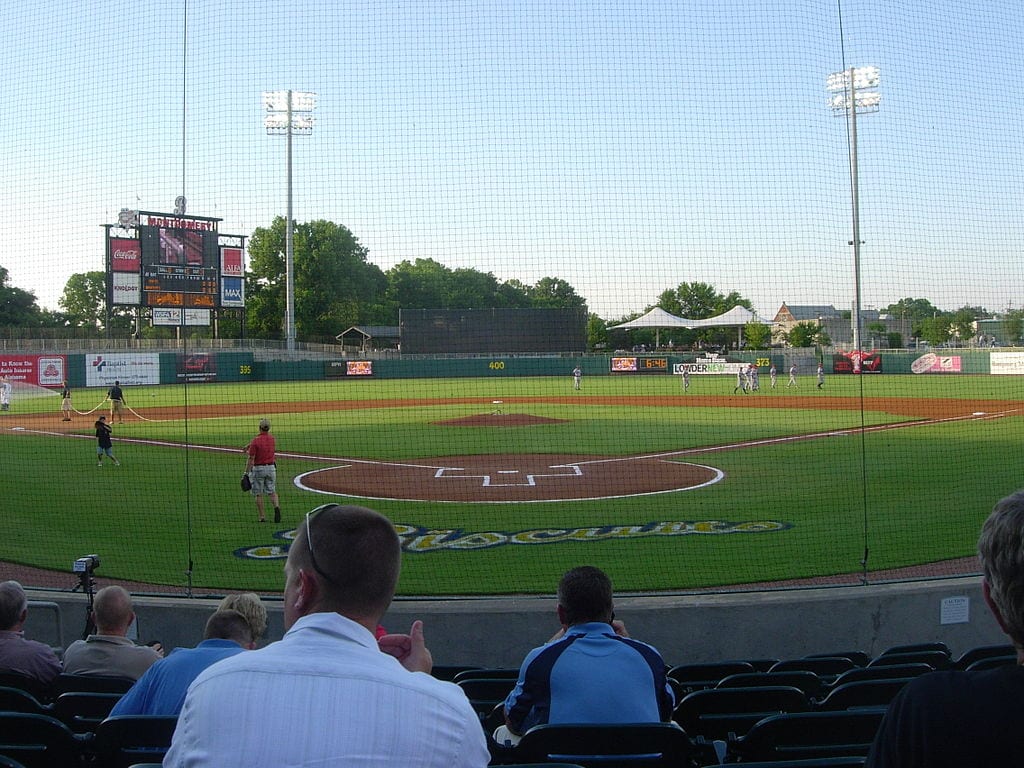 It’s always a challenge getting fans out for minor league baseball games, even Major League games not in L.A., Boston, New York, or St. Louis. Looking through what’s available on night-time TV it’s not altogether clear to me why this should be so. That the Grand Old Game regularly loses out to Antiques Road Show or to yet another re-run of Miss Congeniality is surely a sign of intellectual and moral decay. But there it is. It’s where we are now.

So to get Americanos off their couches and out to the ballpark, teams regularly resort to various promotions, some of them sensible, others to the dopey side. There’s bobble-head night, veterans’ night, dollar beer night (I like this one), ladies’ night (not to be confused with ladies of the night), kids’ night, fireworks night, AARP Night, concert after the game night, and various giveaways of items ranging from team ball-hats to beer steins. But this past weekend the Montgomery Biscuits, the AA farm team of the Tampa Bay Rays, put on one of the most creative and droll promotions ever to take place in the bus leagues. It got a lot of laughs, a bigger crowd than usual to the ballpark, more national attention than the Biscuits usually enjoy (had you heard of them before reading this column?), and even a small amount of blowback from the humor-challenged and the hair-trigger indignatos.

Saturday was Millennial Night at Riverwalk Stadium in Montgomery. Here’s the Tweet from the Biscuits’ Twitter page announcing the event: “Want free things without doing much work? Well you’re in luck. Riverwalk Stadium will be millennial friendly on Saturday, July 21, with a participation ribbon for just showing up, napping and selfie stations, and lots of avocados.”

Well, this was clearly just a bit of non-malicious fun, and most of the good burghers of this Deep South city of 200K, the capital of Alabama, took it as such and laughed along with the team’s promoters. Some even bought the avocado burgers available at the Riverwalk concession stand for $8, the avocado biscuit for $4, or selected one of the available craft beers.

But in these prickly times, almost anything funny is bound to generate whining and indignation from some, even this harmless little jape. The promotion was obviously just having a bit of fun with stereotypes and was not meant as a mean-spirited shot at anyone. Alas, the dreary and humorless never disappoint, and irony is wasted on them. So, no surprise, there were a few resentful tweets from those cheesed off that they didn’t get a trigger-warning before the promotion. With any luck, these folks are now decompressing in a time-out room somewhere with their favorite Teddy bears.

“Eighty percent of our office are millennials, me included,” Biscuits spokesman Mike Murphy said after the game and after the wee bit of grousing surfaced. “We’re just trying to have fun with it, have a good time with the clichés that people have about millennials.”

Just so. Hats off to the Montgomery Biscuits for lightening the mood a bit and getting people to do the honorable thing, which is to take in a baseball game in the good old summertime. This one was more amusing than most promotions. The Biscuits are enjoying a winning season and this promotion was a winner. We can hope the team does it again sometime, even if a few grinches are temporarily put off their avocados by it. We can hope the promotion even won the team some new and permanent fans — maybe even a millennial or two. After all, baseball is gluten-free, though in fairness I should warn that baseball requires an attention span longer than 140-characters.

So we’re with you and the team, Mike. But please don’t forget dollar beer night. I’ll have a Sam Adams, thanks. And hold the avocados.