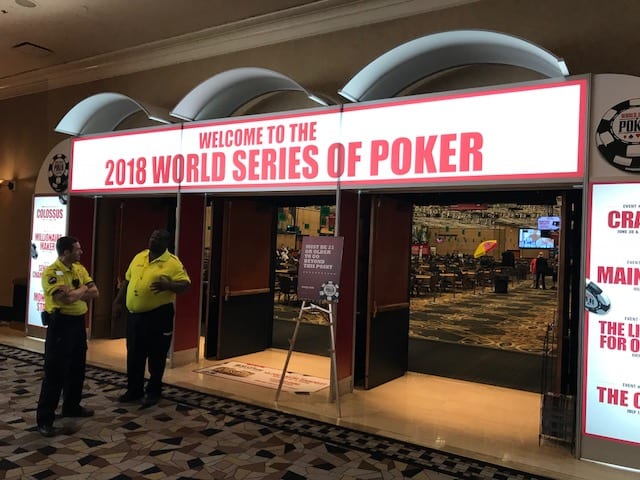 Five-Card Stud or Mixed Doubles, anyone? The history of the World Series of Poker is littered with bygone events — some games that are practically prehistoric by current standards.

As we await the announcement of the 2019 WSOP schedule, let’s look at some of the events the series used to have that haven’t been played either recently or in a long time and my own personal odds that tournament organizers will ever bring them back.

Five-Card Stud — The most famous 5-Stud game wasn’t at the WSOP, it was in a New Orleans card room when Edward G. Robinson pulled a miracle straight flush to beat Steve McQueen’s full house in the movie The Cincinnati Kid. It’s hard to imagine now, but 5-Stud was once the most popular card game. In fact, in 1972 it was the only event at the WSOP other than the championship No-Limit Hold’em tournament. Bill Boyd was the victor in the inaugural 5-Stud tournament 1972 for a $20,000 payday, in the year that “Amarillo Slim” Preston won the main event. 5-Stud was also played in 1973 and 1974 — and won by Boyd each year — before being buried in the WSOP graveyard.

The problem with 5-Stud is that the game isn’t action-inducing due to too much available information. Each player receives two cards initially, one face up and one face down. After that, the mystery is pretty well over. From that point forward, each player receives their three remaining cards face up after each round of betting. Since there’s no draw and only five total cards, a high card often wins the pot. Once a player has an exposed pair, they’ve usually got the hand locked up and the other players fold.

The skinny: Unless tournament organizers are feeling very nostalgic, 5-Stud will not be dug up from the graveyard. There’s a reason it’s been buried there for more than 40 years. Odds of return: 1,000 to 1

Women’s Seven-Card Stud: The ladies-only event was first played in 1977 and the first champion was Jackie McDaniels. The event continued until 2000 when the format was changed to No-Limit Hold’em. That ladies event continues today.

The skinny: NLHE is the game of choice in the present age and since tournament organizers are unlikely to have two women’s-only events, it’s highly unlikely we will see this tournament return. Odds of return: 200 to 1

Five-Card Draw – This is how we all learned to play poker, fighting over pennies at the kitchen table. It’s also the game that Old West cowboys are seen wrangling over in just about every movie or TV show on the period. Draw high was played at Binion’s Horseshoe in 1978 and 1979, and won by a fellow called Lakewood Louie both years. The game continued to be played through 1982, after which it was also tossed from the schedule.

Draw has the opposite problem of 5-Stud in that nearly everything is a mystery. Other than physical tells and the number of cards drawn, there is very little information to go on to determine another player’s hand. The lowball versions of draw are still popular, but back in the 1980s, flop and stud games became more popular versions of high poker.

The skinny: While you don’t see Five-Card Draw played in casinos these days, it wouldn’t be out of the question to see it re-introduced to the WSOP, at least as a novelty for one year as part of some anniversary celebration. (This is the 50th anniversary of the WSOP in 2019, so it’s not impossible.) Odds of return: 20 to 1

Mixed Doubles — Think tennis. One man, one woman, playing as a team. At the WSOP, one player would play 7-Stud for a level and then the other partner would play Limit Hold’em. Doyle Brunson won one of his bracelets this way, playing with Starla Brodie in 1979 and winning $4,500 in the process. The game was played through 1983 and then discontinued.

The skinny: With the growth of poker and an increased focus on women in poker, it wouldn’t be surprising to see mixed doubles, or some similar tag team tournament re-introduced into the fray. After all, 2009 saw the first Dream Team Poker event added to the schedule. Odds of return: 12 to 1

For the uninitiated, the game is played four handed, with each player receiving 13 cards. Players must divide their cards into three poker hands — two containing five cards each and one with three cards. Multiple players can win points or chips on any given hand if their hands are better than some of the other players at the table.

The skinny: A new variation called Open-Face Chinese Poker (where players must place their hands face-up, one card at a time) has become a very popular high-stakes cash game at recent editions of the WSOP and seems to be growing in popularity in general. I wouldn’t be at all surprised to see it re-introduced into the Series schedule sometime in the next decade. Odds of return: 3 to 1

Ace-to-Five Draw — Otherwise known as Lowball, Ace-to-Five has been a popular event through the history of the WSOP. It was played from 1976 to 1996, but then gave way to Deuce-to-Seven Draw for a few years. Ace-to-Five came back from 2000 to 2004, but hasn’t been on the schedule the past decade.

The skinny: Although Deuce-to-Seven has been the lowball game of choice the last few years, I wouldn’t be surprised to see Ace-to-Five return to the WSOP at some point. Odds of return: 5 to 2