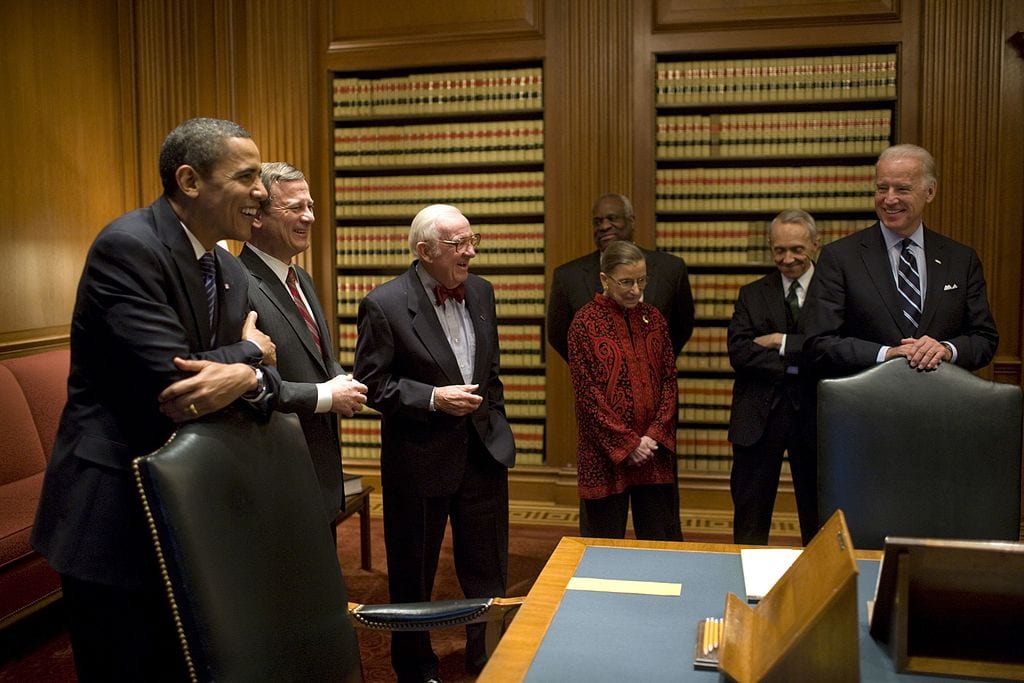 Let’s remember, in the wake of the New York Times editorial by retired U.S. Supreme Court Justice John Paul Stevens suggesting a repeal of the Second Amendment, that Stevens wrote the dissent in the famous Heller case which reaffirmed our individual right to own a handgun.

Stevens’ opinion on guns, namely that unless you’re a big shot like John Paul Stevens you don’t particularly deserve to be protected by them, wasn’t all that newsworthy. He established it in his 2008 Heller dissent. Essentially, he offered up the usual left-wing mush — namely, that the Framers created the Second Amendment as a means to arm state militias against the federal government and therefore the gun rights enshrined therein apply to the militia and not the individual.

In the sense of the Framers, a militia was a stand-in for the right of the public to defend itself against the abuses of a tyrannical government. Like the one they’d just parted ways with, you know.

But as National Review’s Charles Cooke wrote in 2015, and NR reposted his column this week in response to Stevens, to Stevens and those like him who can’t accept gun rights as a fact of American life, stop talking and start acting. Please, PLEASE run on taking away the Second Amendment this fall, and getting a new constitutional amendment repealing the Second:

This will involve hard work, of course. You can’t just sit online and preen to those who already agree with you. No siree. Instead, you’ll have to go around the states — traveling and preaching until the soles of your shoes are thin as paper. You’ll have to lobby Congress, over and over and over again. You’ll have to make ads and shake hands and twist arms and cut deals and suffer all the slings and arrows that will be thrown in your direction. You’ll have to tell anybody who will listen to you that they need to support you; that if they disagree, they’re childish and beholden to the “gun lobby”; that they don’t care enough about children; that their reverence for the Founders is mistaken; that they have blood on their goddamn hands; that they want to own firearms only because their penises are small and they’re not “real men.” And remember, you can’t half-ass it this time. You’re not going out there to tell these people that you want “reform” or that “enough is enough.” You’re going there to solicit their support for removing one of the articles within the Bill of Rights. Make no mistake: It’ll be unpleasant strolling into Pittsburgh or Youngstown or Pueblo and telling blue-collar Democrat after blue-collar Democrat that he only has his guns because he’s not as well endowed as he’d like to be. It’ll be tough explaining to suburban families that their established conception of American liberty is wrong. You might even suffer at the polls because of it. But that’s what it’s going to take. So do it. Start now. Off you go.

Just so. Nothing shows off the modern American Left for the pusillanimous jackasses they are more than the incessant demands for our guns. Smart Republican political consultants and message-makers will hang Stevens, and those obnoxious know-it-all kids from that high school in Florida, around the necks of every swing-district Democrat this fall — regardless of how they might protest that they aren’t really after your guns.

We’re justified in telling these people to shut their pie-holes. It isn’t like there aren’t things about modern-day America that conservatives would choose to get rid of, after all. Pretty much everything about how the Democrats run our urban areas into the ground would change, for example. Or, for another, there’s the Ninth Circus which makes a mockery of American jurisprudence weekly.

So if we can’t roll in and wipe out their abuses of the system, these people damn sure don’t have a right to fundamentally alter the social compact the country was founded on.

I’ve said it before, though. I’ll make Stevens a deal. I’ll go halfway with him, and say we can repeal the Second Amendment for Democrats and take all their guns away. By doing that we could at least be assured the crime rate would drop off quite a bit.

Speaking of those obnoxious know-it-all kids from that high school in Florida, if you haven’t read Jeffrey Lord’s terrific column here at The American Spectator about Stoneman Douglas High School’s “in crowd” and its abusive treatment of Nikolas Cruz, something Emma González (she’s the bald chick with the Cuba patch on her jacket screaming about you losing your gun rights, which falls far enough on the wrong side of creepy to make it quite reasonable to pray for the end of her 15 minutes of fame) gave away the store on this weekend, do it.

Lord has it precisely right: these kids are regular magpies when it comes to casting blame on every politician in sight for what Cruz did, but it doesn’t look like they can stand a whole lot of scrutiny when it comes to whether they had a hand in creating him as a monster.

This isn’t blaming the victim, by the way. None of these kids marching and howling got shot. The actual victims aren’t engaging in political activism that we can see. But if the accusation that Cruz was bullied and ostracized by the very people screaming for an end to gun rights in America is true, and González sure seemed to let the cat out of the bag on that question, then what we have here is something straight out of a bad teen movie.

And if you pay any attention to David Hogg, González, or Cameron Kasky you’ll spot right away that entitled, abusive Cool Kid mentality everybody hated in high school. It’s completely believable.

I would have liked these little loudmouths much more if instead of letting themselves be made Useful Idiots of by the anti-gun crowd, they were marching against the noxious incompetence of America’s public schools. That’s something we should all agree on — but it’ll never happen.

Tuesday Louisiana’s Attorney General Jeff Landry announced that no charges will be filed against Blaine Salamoni and Howie Lake, the Baton Rouge police officers involved in the July 2016 shooting death of Alton Sterling. That was a minor news story nationally, but one with significant local import given that the original reaction of the city’s “civil rights” community was to import the DeRay Mckessons of the world and have them attempt to block interstate highways coming through the state’s Capitol City.

And then came the domestic terrorist Gavin Long, who arrived in August 2016 to kill three local law enforcement officers and severely wound another in a sick form of “retribution” for the black community.

That isn’t going to happen here this time, it doesn’t appear. Two years have passed since the original Alton Sterling fiasco, and despite the best efforts of the usual demagogues nobody seems interested in taking to the streets. Not to mention the Soros money that fueled the Black Lives Matter movement appears to have dried up since there isn’t a presidential election to mobilize voters for (and BLM proved to be a political disaster for the Democrats anyway).

But also, on Tuesday the toxicology report on Sterling was revealed. That report showed he had a cocktail of controlled substances in his system most people couldn’t survive with — among them weed, speed, coke, meth AND booze. And the Attorney General’s report on the case contained an account of how the incident happened that is quite consistent with the notion Sterling was bombed out of his mind, and was therefore incapable of cooperating with police instructions.

They tased him twice. It did no good. And he reached for the pistol the cops knew was in his pocket while struggling with them. What were they supposed to do?

Salamoni is likely going to be fired by the BRPD on Friday, most likely because before the struggle that resulted in Sterling’s death the police officer pointed his gun at Sterling’s head and made profane threats about killing him. Such an aggressive action isn’t all that unconventional — in a normal case it’s reasonable to expect it might shock a suspect into compliance and therefore serve as a de-escalation technique. But in this case, since it resulted in Sterling’s death, there will likely be consequences.

Michael Bennett is terrible. We know that. But are we really at a point as a country where we hire 66-year-old paraplegic women to work crowd control at the Super Bowl? Not to begrudge anybody a job, but that’s a level of inclusiveness that would seem to be a surprise.

Perhaps the company that hired her didn’t take note of the fact Michael Bennett is the crowd they’d have to control.