At Large,Top Story Armenia,Azerbaijan,Donald Trump,Israel,United Nations Settling the International Hypocrisy on Settlements - The American Spectator | USA News and Politics
Menu
At Large
Settling the International Hypocrisy on Settlements
A double standard always at Israel’s expense.
by Paul Miller
A restored Armenian T-72 at the Askeran Tank Memorial near Stepanakert in Nagorno-Karabakh (KennyOMG/Creative Commons) 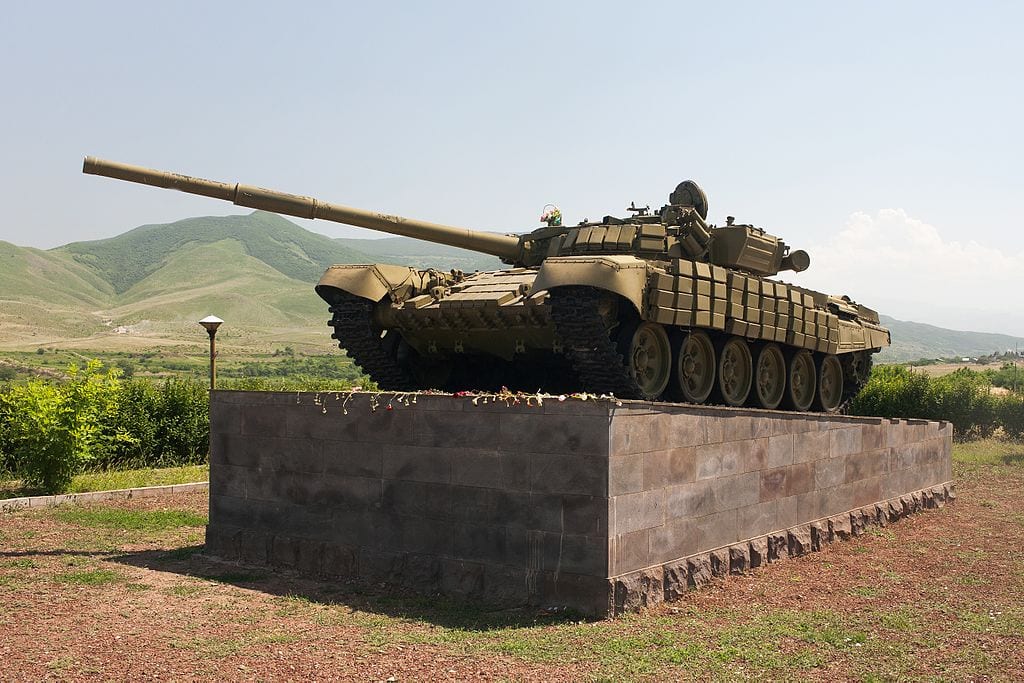 While President Donald Trump’s recently released Mideast peace plan is likely to gain little traction — both with Israel and the U.S. facing partisan gridlock and elections and the Palestinians swiftly rejecting the measure — it does provide a fresh alternative perspective on the Israeli–Palestinian conflict.

More subtly, the so-called “deal of the century” flips on its head long-held assumptions about the conflict while shedding light on the double standards that Israel faces internationally.

One of the primary points of the Trump peace plan is its seal of approval for Israeli settlements, an aspect that has drawn vocal opposition from Palestinians, Arab leaders, Russia, the European Union, Democratic lawmakers, and 2020 presidential candidates. Yet the widespread framing of Israeli settlements as an obstacle to peace with the Palestinians belies the global response to other territorial conflicts.

A particularly telling test case is the conflict between Armenia and Azerbaijan over the Nagorno-Karabakh region. Amid the waning days of the Soviet Union, contention over Nagorno-Karabakh devolved into warfare that saw close to 30,000 people killed and the expulsion of more than 700,000 Azerbaijanis from the territory. Today, Nagorno-Karabakh is recognized by four UN resolutions as well as U.S. State Department policy as part of Azerbaijan, but it is occupied and settled by Armenia.

While Armenia’s actions in Nagorno-Karabakh should seemingly lead to international outrage and a call for an end to this occupation, the overriding reaction has been silence. Unlike their pervasive rebuke of Israeli settlements, human rights groups and various countries actively support Armenia’s settlement of Nagorno-Karabakh. A recent report published by the Foundation for Defense of Democracies found that this selective criticism by governments and NGOs underscores “deeper problems in the international system.”

“Armenia has encountered mainly symbolic opposition to its occupation of Nagorno-Karabakh, with no concrete sanctions or enforcement actions,” the report stated. “UN Security Council resolutions have condemned ‘displacement of large numbers of civilians in the Azerbaijani Republic’ and the occupation of Azerbaijani territory. But they have refrained from directly identifying an aggressor, in part due to the insistence of Russia, which protects Armenia’s interests at the United Nations.”

Indeed, Whitson has helped fundraise for the Armenian National Committee of America (ANCA), the largest Armenian lobbying group in the United States. ANCA advocates for the annexation of Nagorno-Karabakh in defiance of international law. Other sharp critics of Israel’s “occupation” of the Palestinians, such as Rep. Rashida Tlaib (D-Mich.), have been at the forefront of supporting Armenia’s settlement enterprise. Tlaib is co-sponsoring the Artsakh Travel and Communication Act, a bill to normalize U.S. relations with Armenian settlements.

Several other Armenian-American diaspora organizations, including the Armenian Cultural Association of America, the Hayastan All-Armenia Fund, and the Tufenkian Foundation, support settlement activity in Nagorno-Karabakh. In particular, since the outbreak of the Syrian Civil War, ethnic Armenians fleeing the conflict have been encouraged to settle in those occupied territories and receive housing, free utilities, free agricultural equipment, tax breaks, and other financial support.

Even the U.S. government has been complicit in bolstering the Armenian occupation, with American aid allocations exceeding $40 million going to Nagorno-Karabakh from 1998 to 2014.

The double standards do not stop there. The European Union, through the European Court of Justice (ECJ), last November ruled that goods produced in Judea and Samaria cannot be labeled “Made in Israel.” But the ECJ and EU have not enacted a similar policy on goods from Nagorno-Karabakh, which are freely labeled as products of Armenia.

The hypocrisy is even more blatant when it is taken into consideration that Israeli leaders, despite the Jewish people’s deep historic and religious ties to Judea and Samaria dating back thousands of years, still largely support the eventual creation of a Palestinian state. Unlike Armenia’s complete forced removal of Azerbaijanis from Nagorno-Karabakh, the Palestinian population in Gaza as well as Judea and Samaria continues to grow amid modest economic growth in those territories, even as the Israeli–Palestinian conflict rages on.

While governments and NGOs are bound to continue their focus on the Israeli–Palestinian issue, the international community should at the very least be consistent when addressing territorial conflicts. It is time to settle the hypocrisy on settlements, once and for all.

Paul Miller is president and executive director of the news and public-policy group Haym Salomon Center. Follow him on Twitter at @pauliespoint.