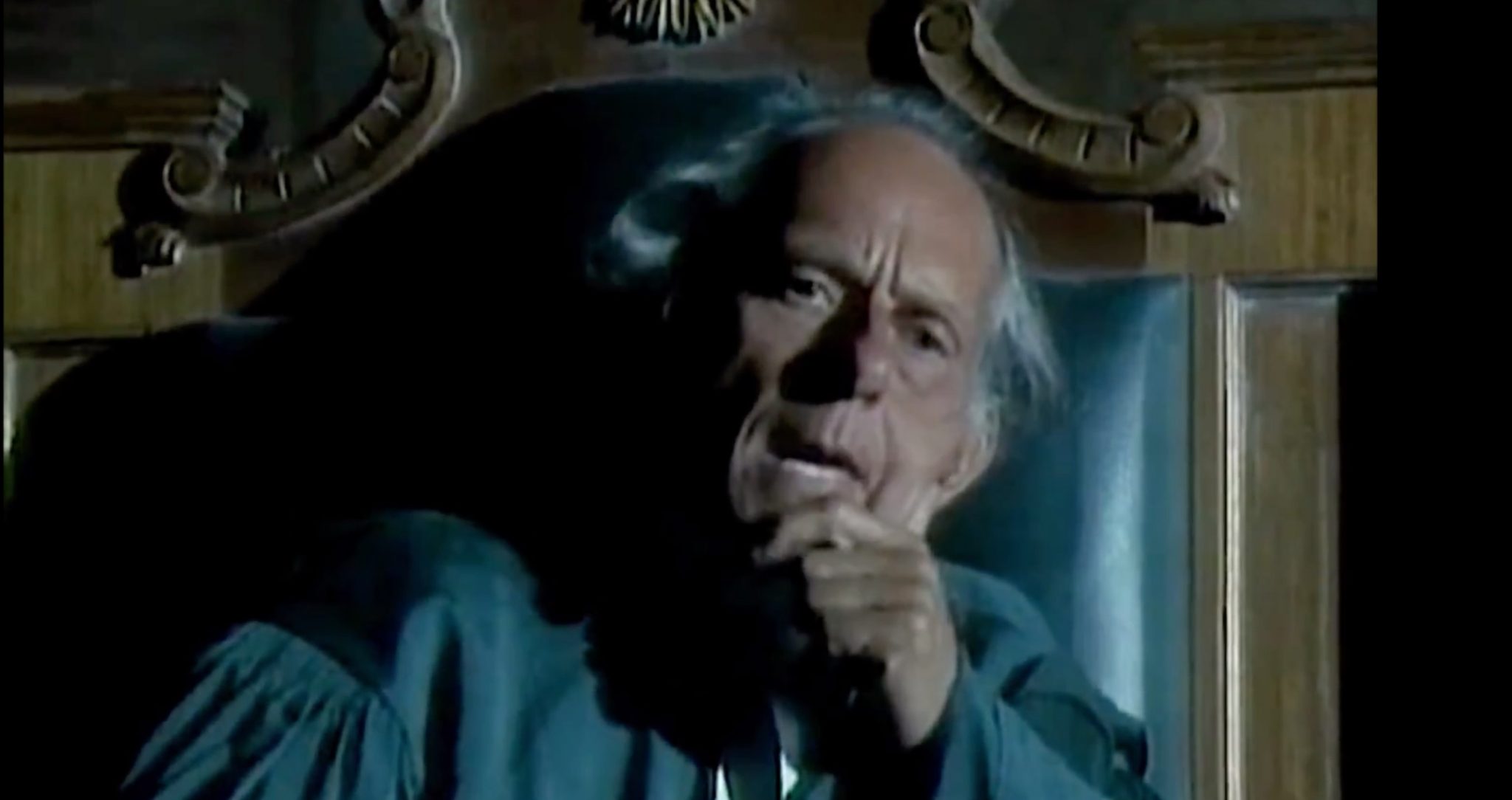 Someone must have been telling lies about Joseph K., for without doing anything wrong he was arrested one fine morning.… “No. You can’t go out. You are arrested.” “So it seems,” said Joseph K. “But what for,” he added. “We are not authorized to tell you that. Go to your room and wait there. Proceedings have been instituted against you, and you will be informed of everything in due course. I am exceeding my instructions in speaking freely to you like this.”

The opening lines of Franz Kafka’s 1914 masterpiece, The Trial, begin the surreal odyssey of an innocent citizen who is arrested by secret police and dragged around a labyrinthine pseudo-legal system, but never has his case heard. In the end, he is executed without trial.

From the often surreal Democratic case for removing President Trump from office, there emerge holes through which one can drive an aircraft carrier the size of four football fields.

Quid pro quo, cui bono? When is quid pro quo not bribery? The key is: cui bono? If the country benefits from a given transaction, the fact that the president also benefits matters not at all. Presidents will benefit if the public perceives that they did something good. Conversely, if the public believes that the administration did badly, the president’s standing suffers. Where bribery rears its ugly head is when private benefits accrue to public officials, but the country does not meaningfully share in the reward. No Trump family member benefited from the president’s dealings with Ukraine. But Hunter Biden has reaped vast rewards as the son of a vice president.

Tale of Two Presidents. White House counsel also cited the infamous March 26, 2012, open-mic incident, when then-President Obama told Russia’s then-President Dmitri Medvedev that after the election he would have “more flexibility” on missile defense, so Medvedev should ask Vladimir Putin to “give me space” until after the fall election. Earlier, Obama’s 2010 National Security Strategy had said, of theater missile defense:

To better protect our forces and those of our allies, we intend to field more of our most capable theater missile defense systems … and convert additional Aegis ships to increase ballistic missile defense capabilities.

So, cui bono, America or Russia? By Obama’s own yardstick, Russia did. As did Obama, personally, in the fall election.

Joe Biden’s False Fire Alarm. Joe openly advertised his having given a six-hour ultimatum to Ukraine: fire a specific prosecutor who just happens to be investigating a company which just happens to employ my son, who just happens to be completely unqualified to hold a position there, or else Ukraine forfeits $1 billion in foreign aid. What grates is that six-hour ultimata are typically given to warn a country whose troops have massed on the border of a target country. If Country A’s troops are massed on Country B’s border, Country A issues an urgent ultimatum calling for B to pull back its troops. But to use the selection of a specific prosecutor to investigate a specific country as an excuse to issue an urgent ultimatum is to abuse power. To use the six-hour ultimatum is to expend major diplomatic capital, making personal benefits derived this way exceptionally egregious.

Presidents Are Less Impeachable Than Judges. “Inappropriate” behavior calls for censure, not impeachment. The Framers decided that “good behavior” should be required for judges. Appointed for life, they must be more readily recallable through impeachment than presidents. Conversely, discipline for those elected to high office who merely misbehave comes from recall by the electorate.

For those who commit egregious acts that injure the republic, and only for those who commit such acts — denominated “high crimes and misdemeanors” — is impeachment the remedy. Thus, in 1867, the House rejected calls for impeachment of Andrew Johnson for non-criminal conduct; only in 1868, when Johnson’s violation of the Tenure of Office Act was added, did the House vote to impeach.

There is a canon of interpretation of constitutional and legislative language, known as ejusdem generis (“of the same kind”): where specific language is immediately followed by general language, the scope of the general language is confined within the scope of the specific language preceding it. This, the impeachment clause specifies “treason, bribery, and other high crimes and misdemeanors.” Thus, the latter phrase is to be interpreted to cover offenses of comparable gravity to treason — an effort to overthrow a government — and bribery — the act of co-opting public power for private benefit.

The Supreme Court ruled in the Clinton–Paula Jones civil case that presidents are not immune from civil lawsuits and thus are subject to civil legal process, even while serving in office. Concurring in the judgment (legalese for agreement with the ruling but not the reasoning underlying the decision), associate justice Stephen Breyer wrote of impeachment:

Another, exceptionally sinister development is that House managers take the position that a president may be impeached for committing entirely lawful acts, if his motives are deemed unlawful. Under this rationale, seeking advice from counsel, filing suit in the courts contesting a subpoena, firing executive branch employees, etc., could be unconstitutional. This is bad enough in garden-variety legal situations, but in impeachments it is an open invitation for the Congress to destroy a president.

Are we to accept that Adam Schiff, in assessing Donald Trump’s motives, will dispassionately weigh the issue? Would a President Adam Schiff (Heaven forbid) be comfortable if a hyper-partisan Republican were to judge his motives? Such would reduce the president to an appendage of Congress, and dispense with the separation of powers that lies at the heart of the American republic established by the Framers of 1787.

The House of Representatives is Not the Senate. Judge Starr made a point Monday that has been overlooked: Senators sit as a trial court, and thus must do so “on oath or affirmation” (Art. I, sec. 3, cl. 2); but members of the House do not take an oath when considering articles of impeachment (Art. I, sec. 2 cl. 3). (Judge Starr noted that senators are not jurors; they sit as a court — and thus are able to rule on matters such as admission of evidence and questioning House managers.)

What is a trial without witnesses? Trials in which before the courtroom proceedings begin, the judge excludes evidence deemed inadmissible happen all the time, every day, in every state of the Union. In civil cases, in which there is no “genuine issue of material fact,” the judge enters summary judgment and thus precludes trial witnesses from appearing. Witnesses may, if so legally privileged, decline to testify or be barred from testifying by others so legally privileged. Examples of privileged confidential relationships are spousal incapacity (a spouse cannot testify against a spouse), attorney–client (client asserts privilege), doctor–patient (patient asserts), and priest–penitent (penitent asserts). Criminal cases impose even greater constraints on production of evidence. Routinely, pretrial evidentiary hearings exclude evidence obtained in violation of constitutional prohibitions against unreasonable search and seizure and self-incrimination. In any case, for myriad legal reasons, testimony or documents can be ruled inadmissible if the presiding judge rules that admission of such evidence would be unfairly prejudicial to any litigant’s case.

Evidence: What gets in? The Senate’s impeachment trial rules expressly provide (Rule XI) that admissibility of evidence and witness testimony is determined in the first instance by the presiding officer (the chief justice in presidential trials), reviewable by the full Senate if the senators so choose by vote. Matters falling within the presiding officer’s purview include, but are not limited to, “competency, materiality, and relevancy,” and other “incidental” questions.

A short evidence course for non-lawyers: Essentially, to be admitted in a proceeding evidence must pass through four strainers. The first is “authenticity” — is the item genuinely what it purports to be (does a handwritten letter attributed to X bear his signature?). This principle is so basic that the Senate rules take this as a given, without mention. The rules mention three key principles: “Competency” refers to the propriety of admission, that is, not excluded by constitutional or other lawful privilege (see above). “Materiality” denotes importance — does the item, if proven, help establish a collateral or ultimate fact; the former are facts that along with other collateral facts, establish a factual finding that has legal consequences, that is, an ultimate fact.

Thus, if in a famed board game of my youth, Col. Mustard kills Mr. Boddy [sic] (the game’s universal victim) by shooting him with a carefully aimed gun in the conservatory: the facts of the victim’s death, that the murder weapon was fired, carefully aimed, by Col. Mustard, in the conservatory, are all collateral facts. Add them all together, and Col. Mustard is guilty. This leaves “relevancy”: this denotes whether or not an item if admitted would prove helpful — shed additional light — in ascertaining guilt or lack of it. (For civil cases, substitute liability for guilt.)

Each House Article, Indivisible. A key point made by White House counsel is that the Senate rules (Article XIII) specify:

As the president’s brief explains, referring to the House impeachment rules, Article I’s multiple grounds, all subsumed under the catch-all phrase “abuse of power,” could lead to a two-thirds majority with no single specific violation meeting that high threshold: The president is accused of conspiring with Ukraine to interfere in the 2020 election; he also is accused of withholding foreign aid in return for personal favors. Even if each of these hypothetically were true (they aren’t), these would have to have been voted on by the House as separate articles to meet the Senate indivisibility rule. Otherwise, the trial’s 67-vote conviction threshold could be cleared if 47 senators voted in favor of the “abuse of power” article with Ukraine election interference in mind, while 20 other senators voted that way with withholding foreign aid in mind. (N.B.: Each article can be supported by multiple factual allegations, but each article must be voted on indivisibly.)

“Was help at hand? Were there some arguments in his favor that had been overlooked? Of course there must be. Logic is doubtless unshakable, but it cannot withstand a man who wants to go on living. Where was the judge whom he had never seen? Where was the High Court, to which he had never penetrated? He raised his hands and spread out all his fingers.… But the hands of one of the partners were already at K.’s throat, while the other thrust the knife into his heart and turned it there twice.”

John C. Wohlstetter is author of Sleepwalking with the Bomb (Second Edition 2014).