For years, the Washington establishment held up Sally Quinn, the wife of the late Washington Post editor Ben Bradlee, as the society doyenne par excellence and a “serious” reporter. The Great and Good would gather at her mansion to bat around the issues of the day. Much talk of a sinister religiosity afoot in the land would ensue. But it turns out that Quinn, when not passing around drinks and appetizers to these self-proclaimed rationalists, was in the back playing with her tarot cards and concocting hexes for her enemies.

In her new “spiritual memoir,” Finding Magic, Quinn discloses her ambitious forays into the world of the occult. The Washington Post, which had assigned Quinn to the religion beat late in her career, has greeted the revelations with understandable embarrassment. It assigned a review of her book to Senator Sherrod Brown’s wife, Connie Schultz, who reacts to the book with disdain:

Quinn’s memoir is peppered with references to youthful affairs and the past indiscretions of named colleagues and friends. Most alarming, she confesses that, like her mother, she believes in the deadly power of hexes — and suggests that she has harmed people by using them. If the hairs just stood up on the back of your neck, believe me, you aren’t alone.

Quinn was a Style writer and columnist at The Post, and a celebrated Washington hostess who, for decades, threw some of the biggest parties in town. She is also widely known as Bradlee’s third — and longtime — wife.

Her belief in magic and the occult began in early childhood in the 1940s, when she often lived with maternal relatives in Savannah and Statesboro, Ga. As she writes in the memoir, her great-aunt Ruth was a “nice Presbyterian lady” and “a devotee of Scottish mysticism,” and all of the black domestic staff members “were adherents of voodoo, which they practiced regularly.” Quinn describes spirits showing up to make breakfast before the family rose. Years later, she writes, one welcomed her to Grey Gardens, a famous mansion in the Hamptons that she and Bradlee bought in 1979.

Quinn seems to have few reservations about revealing her belief in the deadly power of hexes — her mother’s and her own.

Unmentioned in the review is Quinn’s comment that friends have approached her to put a deadly hex on Donald Trump. “You can’t imagine the number of people who have asked me to put a hex on Donald Trump — I mean, I have got friends lined up. This is my biggest restraint now,” she has said. 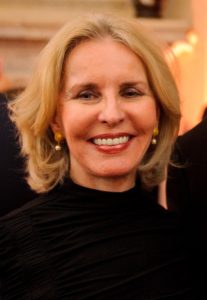 Ever the dingbat, Quinn attributes the misfortunes of her targets to the efficacy of her hexes. She had the makings of a horoscope writer, to be sure, but the Post instead assigned her to the “On Faith” section alongside the oh-so-earnest “scholar” Jon Meacham, who now no doubt cringes at the association. In that capacity, Quinn, among her other shining moments, explained to readers why she had a right to take Holy Communion at Tim Russert’s Catholic funeral.

All of this establishment flakiness, which Quinn typifies, is worth keeping in mind whenever a Dianne Feinstein demands to know why the “dogma lives loudly” within a Christian judicial nominee like Amy Coney Barrett. Implicit in such secularist brow-beating is that ruling-class liberals enjoy a monopoly on “reason.” Throwing around references to “reason” and “science” is now part of the daily patter of smug liberalism: Al Gore speaks of an “assault on reason,” Hillary Clinton treats the rejection of her campaign platform as a repudiation of “reason,” blogging celebrities who can barely craft a coherent sentence invoke “reason,” and so on.

Yet nothing is more superstitious and irrational than modern liberalism. The post-Christian culture into which it has plunged America is overflowing with Sally Quinns, dabbling with this or that kookish fad. Since Feinstein’s outburst of anti-Catholic bigotry, liberals have been circling the wagons. Somber, learned-sounding articles have appeared, arguing that Feinstein was right to probe the Catholicism of Trump’s nominee.

The presumption of these articles is enormous, as if the Constitution were written by secularists for secularists. In fact, as many of the founding fathers explained, the Constitution was written for a “Christian people” and they correctly surmised it wouldn’t survive the dissolution of Christianity. The left’s anti-constitution, the so-called “living constitution” which Feinstein was in effect demanding that Amy Coney Barret uphold, represents the fulfillment of the founders’ fears.

The destruction of constitutional jurisprudence has come not at the hands of Christians but from judicial activists in whom the secularist, anti-Christian ethos lives loudly — the kind of justices who used to turn up at the dinner parties of Sally Quinn.