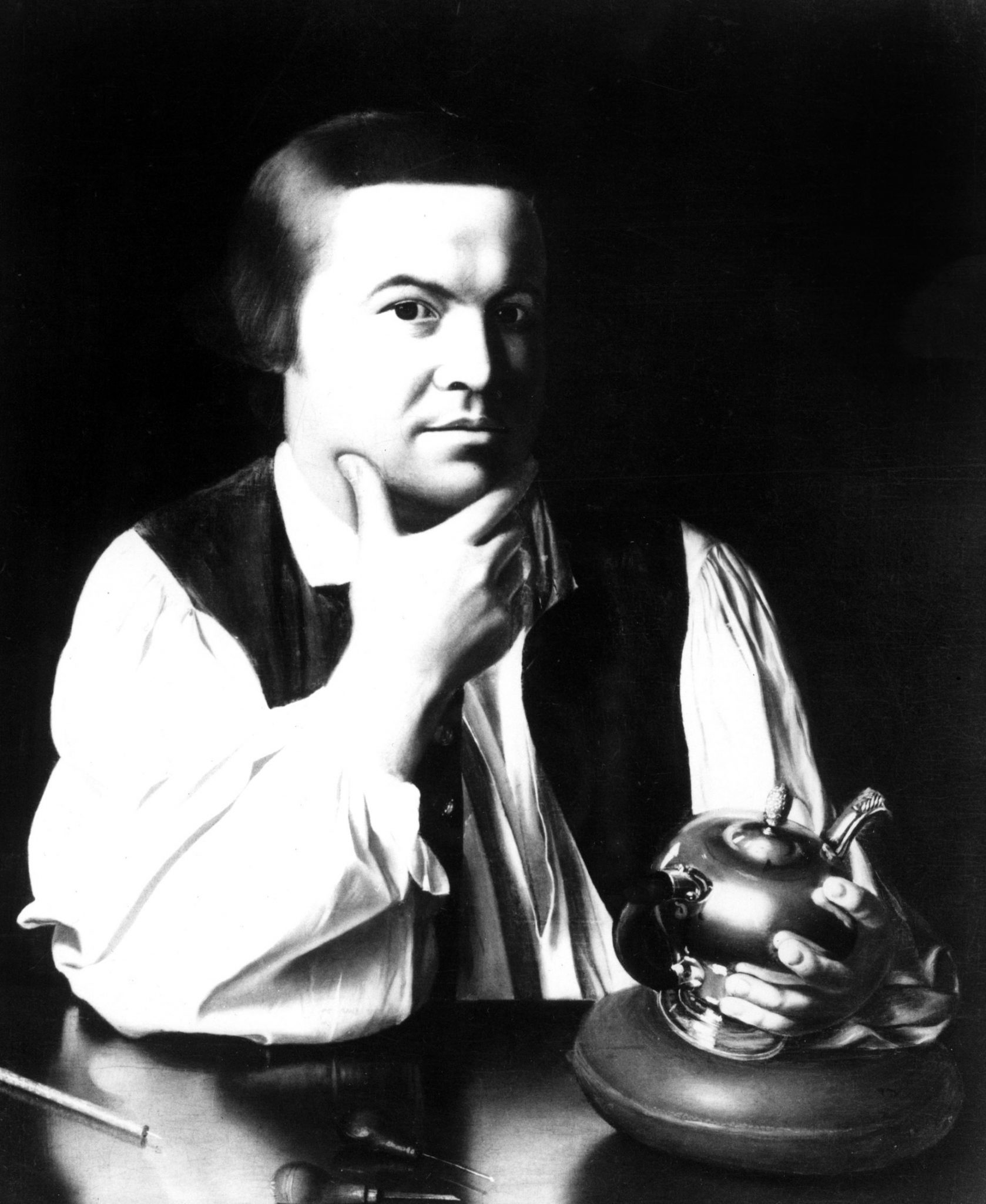 Listen, my children, and you shall hear
Of the midnight ride of Paul Revere,
On the eighteenth of April, in Seventy-Five;
Hardly a man is now alive
Who remembers that famous day and year.

Other than recalling a fragment of Henry Wadsworth Longfellow’s wonderful, if historically inaccurate poem, many Americans, myself included, do not know much more about Paul Revere, the man, and his ride through Middlesex county to alert the countryside on the movement, in force, of British Regulars in the direction of Lexington.

The British aimed to snatch John Hancock and Sam Adams before moving on to Concord to seize a large cache of munitions on that consequential night in April 1775.

John Singleton Copley’s portrait of Paul Revere, circa 1771, presents a picture of a confident, accomplished artisan or “mechanic” as silversmiths and other craftsmen were called in that era. In this image, Revere is 35 years old, confident, casual and prosperous, with his tools about him, holding a silver teapot.

David Hackett Fischer, a Pulitzer Prize-winning historian and author of the indispensable book, Paul Revere’s Ride (1994), describes Copley’s Revere: “His shirt is plain and simple, but it is handsomely cut from fine linen.” He is “of middling height, neither tall nor short. He is strong and stocky, with broad shoulders, a thick neck, muscular arms and powerful wrists…His eyes are deep chestnut brown, and their high-arched brows give the face a permanently quizzical expression.”

“The gaze is clear and very direct.” It is “the steady look of an independent man,” writes Fischer.

The coming of the Fourth of July, 2010, seemed like an appropriate occasion to rectify my ignorance of Revere, given his iconic status in the founding of our country.

I had once taken a brief stroll on a section of the Freedom Trail in Boston during a hurried business trip but was unable to take one of the fine guided tours offered by the National Park Service which runs the Boston National Historical Park.

The Freedom Trail is a 2.5 mile red-brick walking path through 16 historic sites, including the Old North Church and Paul Revere House. In 1951 public-spirited citizens in Boston were able to convince city leaders to formally establish the Trail. In 1964 the Freedom Trail Foundation was established to market and preserve it. By 1974 the National Park Service also came into the picture. As many as 3 to 4 million visitors come every year.

Paul Revere was the son of Apollos Rivoire, a Huguenot or French Calvinist who fled religious persecution to come to New England as an apprentice to an elderly silversmith. Paul, however, did not speak a word of French.

Paul Revere, as described by Fischer, was a successful artisan and businessman, connected to all the various revolutionary cells active in the Massachusetts of 1775. In fact, he belonged to more groups and knew more operatives and political leaders than almost anyone, certainly in Boston. Moreover, he developed a significant intelligence and communications network for which he was one of the central nodes.

Fischer observes that “Paul Revere’s primary mission was not to alarm the countryside. His specific purpose was to warn Samuel Adams and John Hancock, who were thought to be the objects of the expedition.” The military stores at Concord were of secondary concern. Still, by morning thousands of fully-armed militia had arrived on the field at both Lexington and Concord ready for closed formation fighting.

“Paul Revere and the other messengers did not spread the alarm merely by knocking on individual farmhouse doors,” says David Hackett Fischer. “They also awakened the institutions of New England. The midnight riders went systematically about the task of engaging town leaders and militia commanders of their region. They enlisted its churches and ministers, its physicians and lawyers, its family networks and voluntary associations.…They knew from long experience that successful efforts requires sustained planning and careful organization.”

A hurry of hoofs in a village street
A shape in the moonlight, a bulk in the dark,
And beneath, from the pebbles, in passing, a spark
Struck out by a steed flying fearless and fleet;
That was all! And yet, through the gloom and the light
The fate of a nation was riding that night;
And the spark struck out by that steed, in his flight,
Kindled the land into flame with its heat.

By the way, Fischer notes that Paul Revere did not say, “The British are coming.” New Englanders all considered themselves to be British. This is why they were so outraged at the loss of what they considered to be their traditional rights as such. Revere and his countryman would have called the advancing forces Regulars, Redcoats, the King’s men or “Ministerial Troops.” The split in national identity had not yet happened.

Notwithstanding the greatness of Longfellow’s poem, it seems to have made quite a hash of the historical record, poetic license seemingly run riot. According to Fischer New England historians have been laboring to correct these errors for years.

They demonstrated exhaustively that Paul Revere did not receive the lantern signals from the Old North Church, but helped to send them. They documented abundantly the fact that he did not row alone across the Charles River, but was transported by others. They proved conclusively that Paul Revere did not reach Concord, and that another messenger succeeded where he had failed [due to Revere’s capture by the Regulars].

This short article can hardly recount all of Paul Revere’s exploits which are significant. These include not just his acts of individual heroism, but also his careful preparations, collaborative enterprises and, brace yourself, Yankee ingenuity.

Twice during the war that followed the Midnight Ride, Revere went on active service, including an ill-fated expedition against a British fort at Penobscott Bay, maybe the one failure in his life, says Fischer.

After the war Revere was part of the rapid industrialization of America. He learned to cast bell-metal and opened a foundry. He became one of the first American manufacturers to roll copper sheets at scale.

In politics, fearing disorders, he pushed for a federal constitution. Fischer claims he was “a Federalist of the old school, strongly opposed to the growth of Jeffersonian democracy.”

“My friend, you know I always was a warm Republican. I always deprecated Democracy as much as I did Aristocracy,” said Paul Revere, patriot.

So through the night rode Paul Revere;
And so through the night went his cry of alarm
To every Middlesex village and farm,–
A cry of defiance and not of fear,
A voice in the darkness, a knock at the door,
And a word that shall echo forevermore!
For, borne on the night-wind of the Past,
Through all our history, to the last,
In the hour of darkness and peril and need
The people will waken and listen to hear
The hurrying hoof-beat of that steed,
And the midnight-message of Paul Revere.