by Eric Peters
Climate activists protest in the Porsche exhibition center in Wolfsburg, Germany, on Oct. 20, 2022 ( The Independent/YouTube) 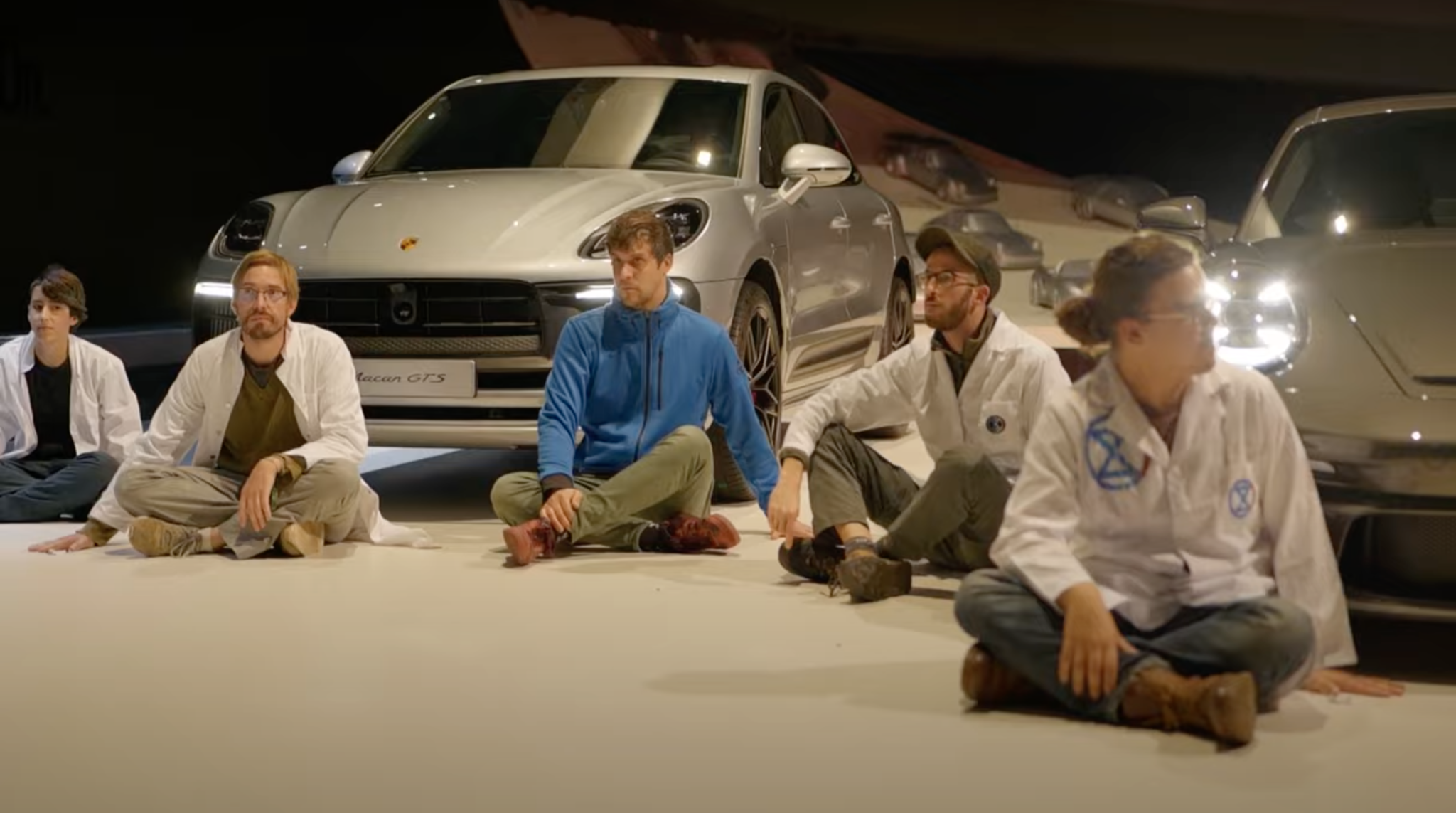 In the Department of You Can’t Make This Stuff Up, a group of German “scientists” who are “concerned” — read deranged — about the “climate emergency” — glued their hands to the floor of the Porsche exhibit hall in Wolfsburg, Germany, to make their point. Which they did alright — just not in the way they meant.

Together with 15 other members of @ScientistRebel1 I have occupied the Porsche pavillion at @Autostadt, 9 of us glued to the floor and some of us on hunger strike until our demands to decarbonise the German transport sector are met👉 https://t.co/Y5uo5IicXb @ClimateHuman pic.twitter.com/SUxUy5Q5uq

Porsche left the “scientists” to make another point about what has become of science in our time — to sit, glued to the floor, in the cold and dark. Which the “scientists” bemoaned, failing to grasp the irony of this.

“(They) have turned off the heating,” wailed one of the “scientists,” Gianluca Grimalda. Who is a “social psychology researcher.”

So much for “science.”

Well, so much for hard science. Math. Facts. Proven. Incontestable. Not a matter of opinion or belief or assertion. That would be political “science,” a non sequitur as well as insulting to the hard sciences.

This Grimalda person wore a white coat to imply the credentials he lacks to offer up more than opinions and assertions about the “climate emergency,” which is an “emergency” in the same way that the one just renewed by President Joe Biden is an “emergency.”

As in a political emergency.

“I’m here in the Porsche Pavilion in the Autostadt of Wolfsburg to denounce the responsibility of Volkswagen in the climate emergency,” Grimalda said. “Volkswagen,” which owns Porsche, “is the largest car manufacturer in Europe and the second largest in the world, and the transport sector, the car sector has a huge responsibility in the climate emergency. There are 12 percent of carbon dioxide emissions that come from the car sector.”

This column has mentioned before the fact  — the science, man — that carbon dioxide, which is a nonreactive gas and critical to the existence of life on this planet (you’d think we were talking about carbon monoxide, insofar as the hysterics about the “emergency”), constitutes about 0.04 percent of the total volume of the gases that envelop the Earth. A scientist would grasp that this is a very small percentage — and that the percentage added to this is even smaller and that “12 percent” — or even triple that — is still a fraction of a percent.

Assuming this is even bad — as opposed to critically necessary for the existence of life on this planet. We’d starve without carbon dioxide, which plants turn into food — as well as oxygen, without which it’s hard to breathe. Or rather, to live.

But “social psychology researchers” do not understand such distinctions. They are “trained” in emotional metrics, their feelings determining their positions — and what they insist ought to be yours as well. Since they believe there is an “emergency” as regards the “climate,” you must believe it, too. Or, at least, you must be forced to pretend that you do, as by abiding by whatever nostrums they insist are necessary to “combat” whatever they say the “emergency” is.

You have probably noticed a common theme. The same emotional metrics have served as the basis of the past three years’s Kabuki theater of “masking” and “social distancing,” which was insisted upon as necessary by the same political scientists. Insisted upon in the manner of a foot-stomping child, unhappy about not getting its way.

These children do things like throw paint at priceless paintings — and glue their hands and so themselves to the floor of a room displaying new cars, which to them are as heinous and intolerable as telling a child it’s bedtime.

Grimalda and the other children who glued themselves to the floor at the exhibition center assumed — as children often do — that the heat would just be “there,” as by the grace of God. Like the food they assume will always be there. It’s just “there,” you see — and never mind where it came from or what it took to produce it. Children do not contemplate such things, for their parents simply provide them.

But when children become unruly, it is necessary to let them know that they are children — and who the parents are. That would be Porsche, in the case at hand.

“People in support … can’t order our food … lights off … random unannounced checks by security guards with bright torches,” foot-stomped Grimalda. Keeping in mind that “people in support” had glued themselves to the floor of Porsche’s Pavilion, as in not Grimalda’s Pavilion — surrounded by several hundred thousand dollars of brand new Porsche vehicles that Porsche — the adults — might worry these agitated children would vandalize.

The “scientist” children also forgot to make provisions for another — and real — emergency. That of emptying their bowels and bladders. Being glued to the floor, they could not do so in the little boys’ — or girls’ — room. So they fumed when the adults “refused our request to provide us with a bowl to urinate and defecate in a decent manner while we are glued.”

You cannot make this stuff up.