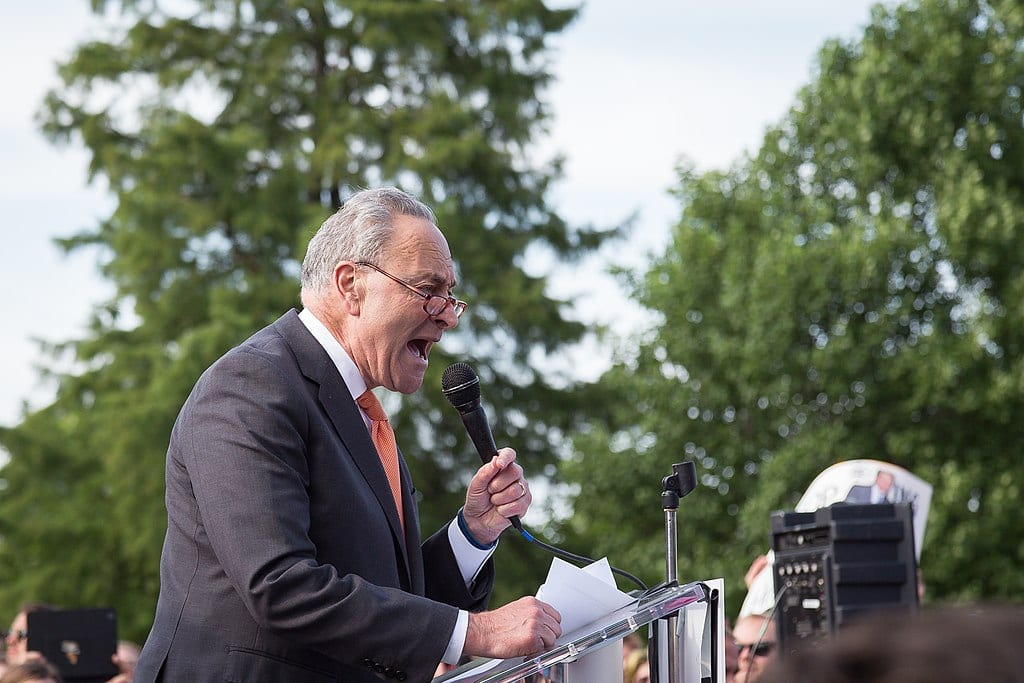 Up Chuck Schumer, said the Democrats back in 1998, when he went from Representative to Senator, and we have been upchucking ever since. Before making Senator, he represented Brooklyn, including the Franciscan Brothers congregation, and Nancy Pelosi represents the San Franciscans. He is the Leader and she is the Speaker, so they divided duties the other night after the President’s address: she led and he spoke.

It was difficult to concentrate on the substance of their rebuttal, because some comedian rudely put up a picture of Herman and Lily Munster on the screen while Chuck and Nancy droned their “yes-drones-no-wall” message… until they hit a wall. If we have to watch this sepulchral spectacle one more time, they will be proven right: this is too high a price to pay for border security!

But let us leave Nancy for the nonce and fix our gaze… no, that is asking too much… fix our deliberations upon my landsman, Chuck, who came to fame in my own childhood district in Brooklyn. (His ancestors in Chortkiv, Ukraine, lived about 300 miles from mine, who were near Chernobyl.) As I outlined here in 2006, my first exposure to the ugliness of Democrat politics came in a neighborhood meeting wherein Chuck asked for votes based on a scheme to fool the blacks into moving out. The great Larry Elder has written this up in books and columns (and has invited me on his national radio show today at 6:40 pm Eastern time).

Yet the sordid tale of Chuck’s racist ploy to launch his career should not be regarded as something isolated, a youthful sin for which he has repented. In fact, he has been unscrupulous and cutthroat throughout his career, stepping on toes and scorching the earth liberally. Today, as he does his Schutdown Two-Schoe and preaches sanctimoniously about the sins of others, seems as good a time as any to review some of his greatest hits… and misses.

Back in 1996, when the Rob Verga campaign for Schumer’s House seat was thinking of bringing me on board, I attended a few meetings with the candidate and even traveled as his envoy to the Republican National Committee in D.C. (The geniuses there would not put up a dime to help him until he could produce a poll showing him at 45%.) During this process, we met the previous Republican candidate (I think his name was McCord), who had garnered 27% of the vote against Schumer in 1994.

He advised us strongly against mounting a serious campaign. He showed us documentation to demonstrate how Schumer had wiped him out in the last election. Good old Chuck, Mister Nice Guy, had plenty of funds as a New York incumbent, so he had a team of lawyers file one complaint after another to the Federal Election Commission every time the Republican’s campaign spent a dollar. They harassed him with frivolous filings until all his money went to lawyers and all his time went to contending with the onslaught.

My candidate, Rob Verga, never got big enough to merit this treatment, so Schumer would just bully him personally. Verga figured he could get some exposure by turning up at public events in the district, including a controversy where neighbors were picketing a new night club they thought was damaging the neighborhood. When Rob actually was quoted in a New York Daily News article, and his presence at the picket line was noted, it made Schumer look bad. Chuck picked up the phone to yell at Rob: “Who the hell do you think you are, to show up here as a candidate and give people the impression you can help them?”

Verga worked on Wall Street as an analyst with Manufacturer Hanovers Trust, and he had reached an understanding with his employers that he would be given time off to campaign. After Schumer made that call to him, his bosses called him in to say he would be expected to work his full schedule. We could never prove that Schumer had someone call his employer, but it sure seemed that way.

By bullying Rob into keeping his head down, Chuck was free to stop campaigning for his own seat and devote all his time to running Carolyn McCarthy’s campaign to unseat Republican Congressman Dan Frisa. McCarthy’s husband had been murdered on the New York City subway by deranged spree killer Colin Ferguson, and Schumer directed a masterful strategy combining victimology with gun control. Frisa never knew what hit him and McCarthy held that seat for 18 years until she retired in 2015. Now Schumer is using the “schutdown” to try and bully Donald Trump. If at least he could guarantee us he would “schutup,” we might be tempted to relent.

But this time The Chuck may have met his match in The Donald. It is hard to bully the man who has the bully pulpit.