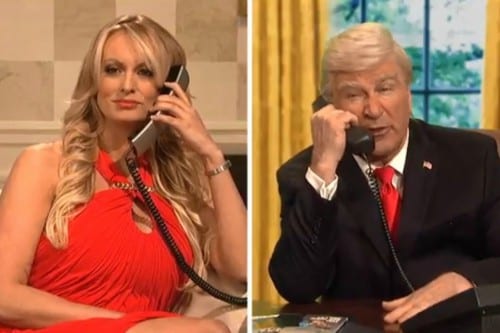 “The fun of Saturday Night Live was always you never knew which way they leaned politically,” Rob Schneider recently told The New York Daily News. “You kind of assumed they would lean more left and liberal, but now the cat’s out of the bag they are completely against Trump, which I think makes it less interesting because you know the direction the piece is going.”

The Saturday Night Live alum characterizes his old show as predictable and thus not very funny. He thinks politics rather than punchlines motivate the writing. He cites Alec Baldwin’s impersonation of the president as a case in point. Because the audience knows the actor’s politics, they know where the sketch goes before it arrives.

As if to validate his observations, the show showcased former pornographic film star and current kiss-and-tell critic of the president Stormy Daniels this weekend. It seemed more like a Two Minutes Hate than a comedy sketch. “What do you need for all of this to go away?” fake Trump asked real Daniels. “A resignation.”

CNN reported that the live crowd “cheered” the line. That’s what attendees at political rallies do, they cheer. Comedy, at least good comedy, generally provokes a different response.

When the audience laughs out of ideological solidarity rather than any inherent funniness, comedy fails. When the crowd cheers, comedy fails more than when it boos. Network television—as opposed to niche television—cannot afford to turn half of its potential audience into a consistent punching bag. Sure, it’s late-night television, airing when squares and get-off-my-lawn old men sleep. And, yes, SNL always catered to a coastal audience at the expense of Middle America. But the current cast mistakes leftism for clever and imagines comedy as an extension of politics. Viewers experience a self-flattering show in which the cast thinks of themselves as carbon copies of their audience and bores in fixating on that which so many tune-in to escape. Like football fans taking in other Sunday activities after the sight of anthem kneelers disgusts, humorless ideologues masking political sermons as standup or skits compel an exodus.

“People aren’t laughing at it as much as cheering on the rhetoric,” Schneider notes. “It no longer resembles a comedy show, it’s more like some kind of liberal klan meeting. Comedy seems no longer the point. It’s just subterfuge.”