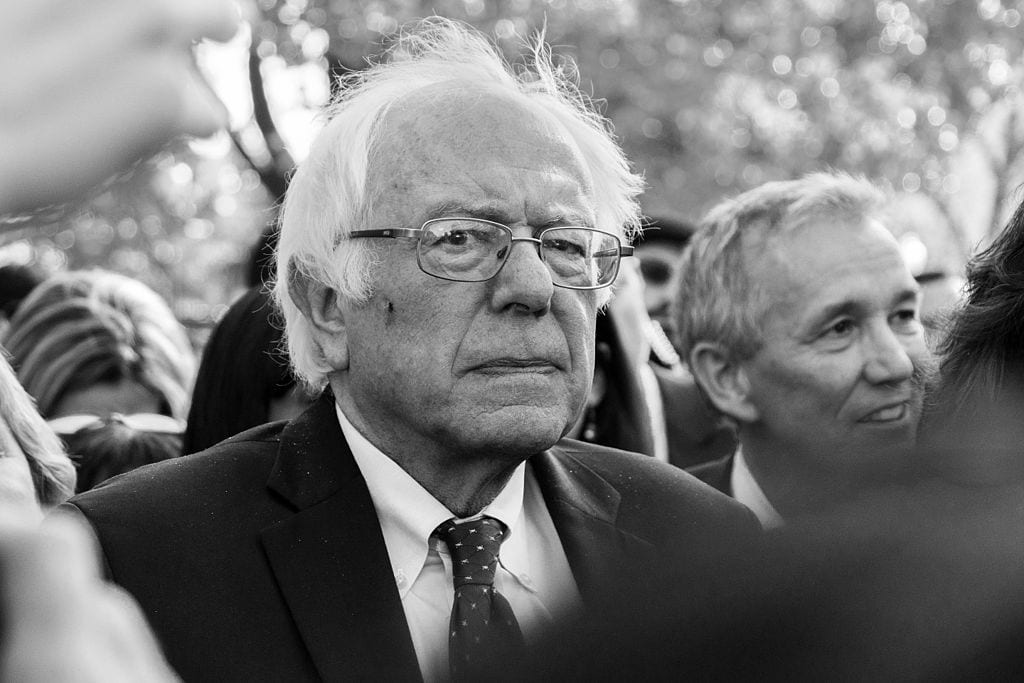 President Bernie Sanders has defended the actions of the army and national guard on the U.S.-Mexico border. Speaking to reporters after a ceremony at the White House honoring Scouts BSA, formerly the Boy Scouts of America, he said the “measures taken” were “wholly consistent with international law — and besides, at the end of the day we had no choice.”

According to the Mexican health ministry, 963 of an estimated million unarmed individuals who on Wednesday approached the border at various points between the Pacific and the Gulf of Mexico in the framework of the “La Gran Marcha de Regreso” (Great March of Return) were killed. The ministry said this was mainly the result of U.S. gunfire, but some of the fatalities were due to inhaling gas sprayed from drones. The number of injured is unknown but thought to be considerably higher.

No military or civilian deaths or injuries have been reported on the U.S. side.

“Look, at the end of the day we’re not talking Martin Luther King here, OK?” the president said. “Unarmed? Give me a break. Molotov cocktails! Sledgehammers! Wire cutters! Ladders! You know what we used to call that in Brooklyn? We called it pardon the expression bulls**t. And the whole thing was orchestrated by ¡Arriba! which has a history of sending suicide bombers into Anaheim and rockets into San Diego, Tucson, San Antonio.”

“Let me just say this,” he added. “No major or for that matter minor country in the world can allow havoc. As commander-in-chief I have to represent more than Ben & Jerry. My responsibility is to protect all citizens of this great country and also all legal immigrants be they Democrats, Republicans, independents, women, men, gay, heterosexual, bi, trans, old, young, black, brown, white or what have you. ¡Arriba! sent huge numbers to try and violently break in and spread death and destruction. Can you imagine if they’d gotten through, God forbid? Thanks to our brave women and men in uniform, none succeeded.”

Mexico’s ruling party since a coup in 2019 has been ¡Arriba! Its covenant holds that as a result of the Mexican-American War (1846-48) “the so-called United States” illegally occupies California, Arizona, New Mexico, Texas, a portion of Colorado and a portion of Nevada including the Venetian hotel-casino and convention center. This land is to be regained and the descendants of all ethnically-cleansed Mexicans returned by, in the words of the covenant, “any means necessary.”

It quotes Henry David Thoreau, who objected to the war and refused to pay taxes, and Ulysses S. Grant, the 18th U.S. president, who served with distinction in the war and wrote in his memoirs that it was a land-grab by a strong, aggressive country victimizing a weak one.

“Thoreau & Grant were right,” Miguel Luis Obregón, secretary-general of ¡Arriba!, tweeted yesterday at #Regreso. “Wasn’t it enough for Sanders to blockade Mexico & turn it into the world’s largest open air prison? Did he have to slaughter innocent men, women & children? We sh*t on the border & we sh*t on this criminal & look forward to seeing him in The Hague.”

Obregón added that the marches will continue “until the Mexican people destroy the gringo entity.”

Since the coup, a land, sea, and air blockade of Mexico has been enforced by the U.S., British Honduras, and Guatemala who claim it prevents arms and tunneling equipment reaching the country from Venezuela, Turkey, China, North Korea, and the Islamic Republic of Iran. The blockade, initiated by Donald Trump and tightened by Sanders, has brought Mexico to the verge of what the United Nations Inter-Agency Standing Committee terms a humanitarian catastrophe.

At the request of non-permanent members Turkey and Iran, the UN Security Council is to meet later today to weigh authorizing an investigation of happenings at the border. A majority of permanent members are thought to be in favor, but any move to authorize is expected to be vetoed by U.S. ambassador Chelsea Clinton.

With the exception of French president Marine Le Pen and Israeli prime minister-for-life Benjamin Netanyahu, most world leaders have condemned the U.S. and Sanders.

Prime minister Jeremy Corbyn told the British House of Commons that the “killing” was “horrific, shocking… and inexcusable,” while Recep Tayyip Erdoğan, president-for-life of Turkey, called it “genocidal and frankly Zionist.” He was echoed by 80-something Iranian Supreme Leader Ayatollah Mohammad-Taqi Mesbah Yazdi, who tweeted: “Zionist.” Vladimir Putin, Xi Jinping, and Kim Jong-un, respectively president-for-life of Russia, president-for-life of China, and Dear Leader-for-life of North Korea, described the bloodshed as “reprehensible,” “appalling,” and “wildly disproportionate.”

Replying to Prime Minister Corbyn, the president said, “He would say that, wouldn’t he? He lives on an island.”

Legacy and social media reaction stateside and worldwide has also been unfavorable, with images of wounded and dead protesters going viral. The BBC, CNN, and even Fox have shown clips of apparent bystanders mown down, and the Guardian, the New York Times, and the Washington Post have excoriated Sanders and the U.S. military.

However, during her briefing Kirschenbaum maintained that whatever the rights and wrongs of ancient history, every country has the duty to protect its borders. The president had warned ¡Arriba! and so the guilt for any deaths and injuries lay on what she called “the terrorists.” She also chided the media for not “doing your homework.”

Questioned regarding a video made by then-Senator Sanders in 2018, in which he deplored the deaths and injuries of Gaza protesters hit by Israeli gunfire and said he understood their “desperation” after years of blockade and their desire “to return to their homes,” she pointed out that at the time she was an intern at Mother Jones and stated there was “no comparison.”

After the Scouts were ushered out, the president tweeted the same criticisms of the media but in harsher language. He pilloried Anderson Cooper of CNN for, in his view, interviewing ¡Arriba! leader Obregón fawningly. “Shame on u, Anderson,” he wrote. “This u call journalism? Sad!”

But in a separate tweet, Sanders declared that while the “elite press” was hostile, “everybody else” supports him and the military. In this tweet he called on the “long-suffering Mexican people” to “rise up and throw off the yoke” imposed on them by ¡Arriba! “We have nothing against u,” he said. “On the contrary.”

And in still another tweet, he reiterated his opinion that “the silent majority” of Americans is with him.

This appears to be largely true. Keith Ellison, chair of the Democratic National Committee, praised what he called the president’s “decisiveness” and predicted on the basis of fresh polling that he would be overwhelmingly reelected next year when, at the age of 82, he seeks a second term.

Ellison was referring to an overnight Quinnipiac survey in which 83 percent of a cross-section of eligible voters approved of Sanders’s handling of the border issue. The poll has a margin of error of +/- three percent.