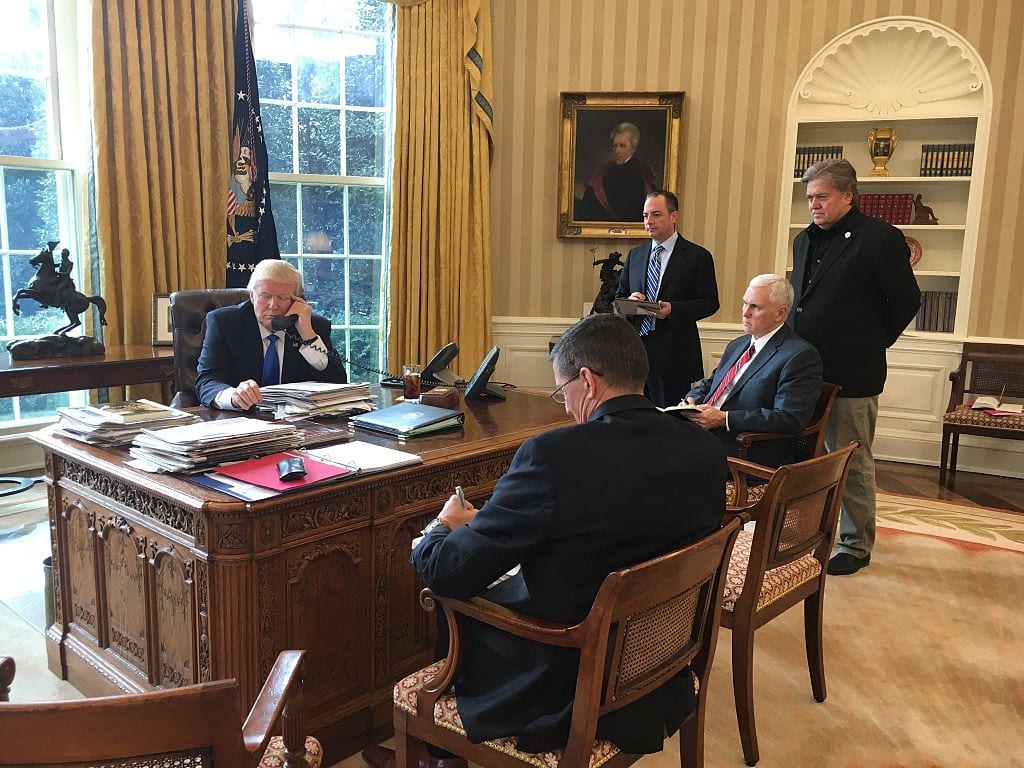 President Trump’s policy toward Russia has been confusing to many people. His too-often stated and too-fulsome praises of Russian President-for-Life Vladimir Putin left many conservatives bewildered.

Trump’s words haven’t been consistent with his actions against Russia. Leftists have been happy to overlook the actions and focus on the words. Perhaps the most confused is Washington Post columnist David Ignatius, who, with the Post’s infallible inaccuracy, wrote recently that the Trump administration was tilting policy toward Russia. He wrote this despite Trump’s threat to withdraw from the Open Skies Treaty and his refusal to enter into more arms control negotiations with Russia without China’s participation.

The administration made a major accusation against Russia this week in a statement by our ambassador to the Organization of Security Cooperation (OSCE) in Russia, former Virginia Gov. Jim Gilmore. (OSCE’s mission is to monitor and try to limit Russian aggression in Europe.)

No new action against Russia is necessary at the moment, but photos of Trump and Zelensky meeting in the Oval Office would send a significant message to the world.

I’ve written before about Russia’s continuing aggression against Ukraine, citing the statements of two prominent Ukrainian government officials. In emails, through translators, Oleksandr Turchynov (former interim Ukrainian president) and Arsen Avakov (current secretary of Ukraine’s National Security and Defense Council) combined to say that Russia still had about 35,000 troops on Ukrainian soil and that the low level of fighting between Russian and Ukrainian forces is clear proof that Russia isn’t giving up its ambitions to conquer all of Ukraine.

Turchynov and Avakov believe that Putin has yet to make a political decision to trigger the final conquest of Ukraine.

The Crimean Peninsula, which Russia conquered in 2014, was formally annexed to Russia after a phony referendum held that the Crimean people wanted to be part of Russia. The United States has condemned that annexation as the illegal result of a sham election. Secretary of State Mike Pompeo has made clear that we regard Crimea as still a part of Ukraine.

In a Thursday statement to OSCE ambassadors, Gilmore condemned Russia’s conscription of unwilling Crimean men into the Russian army in violation of the Geneva Conventions, to which Russia is a party.

Since 2015, Russia has conducted annual spring and fall conscriptions in Crimea. A failure to participate, to submit to those conscriptions, is punishable by a criminal penalty. An August 2019 report by the UN Secretary General stated that at least 18,000 men in Crimea had been conscripted under threat of criminal prosecution into the Russian Armed Forces, some of whom were assigned to military bases in the Russian Federation. The Russian government reportedly conscripted 2,600 individuals into its armed forces in the fall of 2019 and plans to conscript 3,300 more this spring, which would bring the total number conscripted by Russia to nearly 24,000 citizens of Crimea.

His statement went on to say,

Article 51 of the Fourth Geneva Convention states that an Occupying Power “may not compel protected persons to serve in its armed or auxiliary forces.”

Russia has engaged in exactly this type of behavior. In addition to forcing thousands of residents of Crimea into its armed forces by implementing a law that punishes by criminal penalty failure to participate in compulsory military service in the Russian armed forces, Russia has pursued criminal charges against those who resist. A 2019 Human Rights Watch review of court documents from proceedings in occupied Crimea — Russia’s own records — identified 71 criminal draft evasion cases and 63 guilty verdicts between 2017 and 2019. The Crimean Human Rights Group documented eight such cases in February 2020 alone. The actual number of criminal cases is likely to be much higher. Why do we refer to criminal cases? Because that is the force being applied to the people of Crimea in violation of the Geneva Convention.

Russia is an occupying power in Crimea. Its citizens are therefore protected persons under the Conventions.

In short, Gilmore accused Russia of war crimes in Crimea and documented the accusation thoroughly.

There should be no Russian escape from Gilmore’s accusation, but, of course, there will be. The Geneva Conventions rely on their signatories to enforce them. All the nations of the world — including pseudo-states such as the Palestinians — have signed most or all of the Conventions.

Russia has so frightened most of Europe and is so involved in European economies that none of the EU members (21 of 27 of which are NATO members as well) will take a stand against Russia over Ukraine. That, as usual, leaves us to do the heavy lifting. We aren’t — and shouldn’t — go to war over Ukraine, but more can be done.

Trump is so preoccupied by the COVID-19 pandemic and the November election that he has little time for foreign affairs, but he still manages to approve policy statements. He is tremendously gun-shy about dealing with Ukraine because a 2019 conversation with Ukrainian President Volodymyr Zelensky led to his impeachment in January.

The Dems have already said that they’re going to try to impeach Trump again. They told the Supreme Court that last week in support of their lawsuit to get the Mueller investigation’s grand jury transcripts. Let them try.

Despite all that, Trump can do a few things to clarify our policy toward Russia and at the same time enhance our ties to Ukraine.

Presidential speeches are part of governing. Trump has made far too few about foreign policy over the past four years. One of the charges the Dems will make in the campaign is that Trump has made us weaker by his scattershot foreign policy. Joe Biden, don’t forget, was chosen as Obama’s veep on the basis of his long experience in foreign policy (despite the fact that he’s been wrong on every major issue since he became a senator).

Trump should make a policy speech about European security and our opposition to Russian aggression. In it, he should mention Ukraine and his military aid to it as a prime example. Don’t forget that Ukraine begged the Obama administration for military aid since 2014 and didn’t receive it.

Trump has authorized military aid to Ukraine. Avakov told me that our role as a strategic partner to Ukraine is significant. One thing more is needed.

Before the impeachment, Zelensky had been asking for a White House meeting with Trump to show our commitment to his country. Trump should invite him for such a meeting as soon as possible. No new action against Russia is necessary at the moment, but photos of Trump and Zelensky meeting in the Oval Office would send a significant message to the world.

Throughout history, fighting for freedom has never been easy. With Trump, Pompeo, and Gilmore behind them, the Ukrainians have a much better chance to succeed.