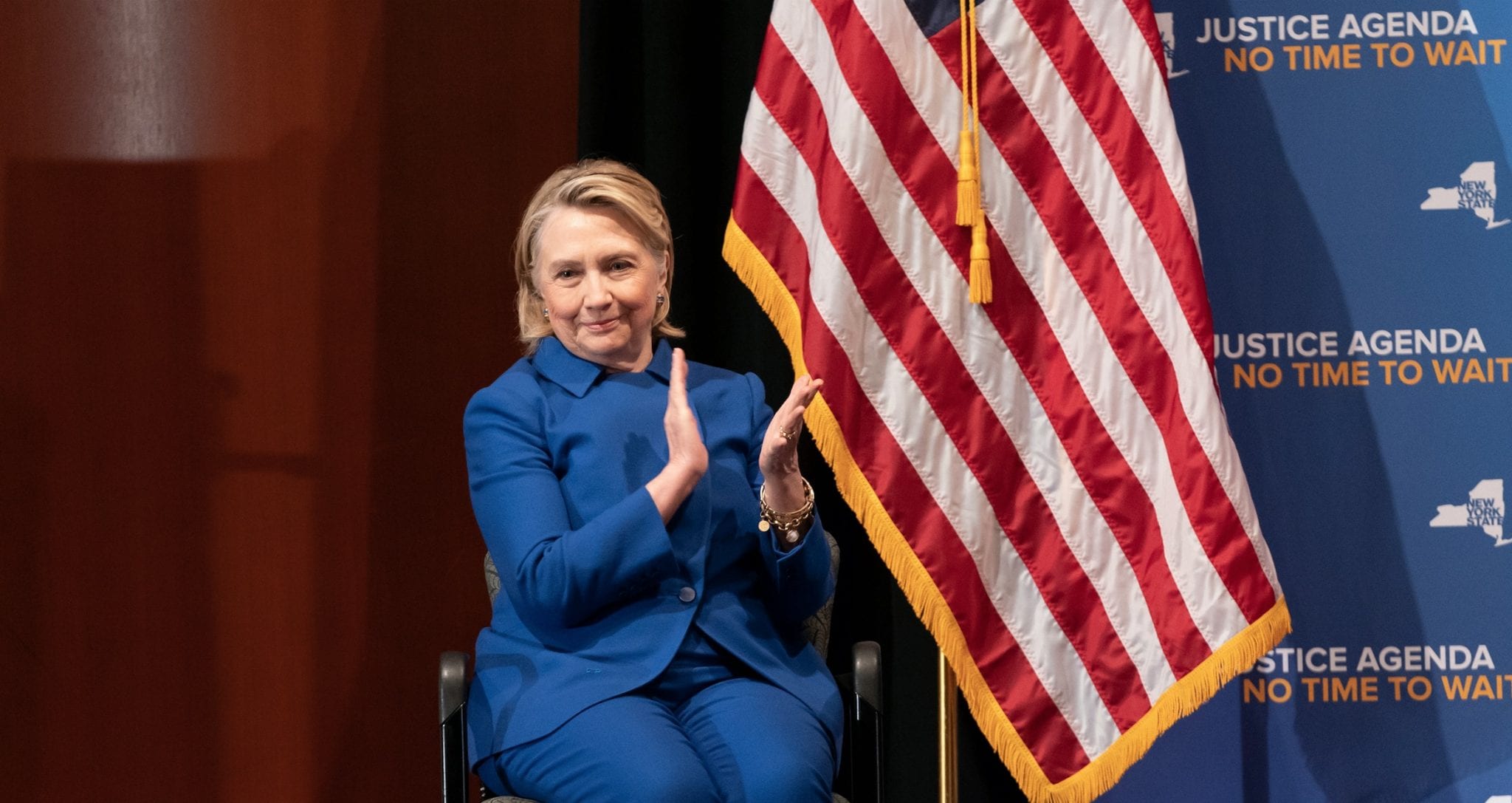 Hillary recently injected herself, with her characteristic venom, into the 2020 presidential race — this time, at the expense of a Democrat. She called Tulsi Gabbard, Hawaii’s four-term member of the House of Representatives, and a veteran who served in Iraq, “a Russian asset.” Gabbard, for her part, blasted Hillary (4:12) for doing so.

Much was made after Trump won of Russian hacks into the Democratic Party’s political databases, and it was argued that therefore it is clear that the Kremlin feared a President Hillary but not a President Trump. As shown below, this is very counterintuitive, making all the more puzzling the near-universal belief inside the Beltway that this is so.

There are strong reasons to conclude otherwise. They can summed up simply: Hillary’s actions speak louder than anyone’s words. During her tenure as secretary of state, Hillary was a reliable diplomatic doormat, genuflecting repeatedly to Moscow’s geostrategic wishes. She began her tenure by presenting (1:06) Russian foreign minister Sergey Lavrov with a large ersatz red button intended to symbolize a “reset” of relations between America and Russia — back to the Clinton years. The Obama administration began the “reset” by lifting sanctions imposed on Russia by George W. Bush after Russia annexed two provinces of Georgia, an ex-satellite of the former Soviet Union.

The Tsarina of Russian Reset was just beginning. Exactly one month into her tenure, she landed in Beijing for an official visit. Looking back, in a September 2014 on-air interview, she revealed what Al Gore would call “an inconvenient truth” when she told radio host Hugh Hewitt,

Add to that what James Comey said when testifying before Congress on the Hillary email mess. He called the level of security on Hillary’s Gmail account less than that on a regular Gmail account.

Apologists for Hillary argue she did not recognize the global reach of the internet (see radio link above). This is clearly untrue.

In a February 15, 2011, address on internet freedom, Hillary, speaking of the then-nascent Facebook revolution in Egypt, and noting that there were two billion people connected online worldwide, called the internet “the world’s town square.” She added that “transparency and confidentiality” were both critical. She said, “In addition to being a public space, the internet is also a channel for private communication, and there must be a way to protect confidential communications.” She cited Wikileaks’ publishing government communications as theft of confidential information. In her speech, she also referenced events in Iran 18 months earlier, when online access drove protests after a rigged election.

Hillary cited the power of global interconnection in a January 21, 2010, address on how the internet can support human rights (emphasis added):

The spread of information networks is forming a new nervous system for our planet. When something happens in Haiti or Hunan, the rest of us learn about it in real time — from real people. And we can respond in real time as well. Americans eager to help in the aftermath of a disaster and the girl trapped in the supermarket are connected in ways that were not even imagined a year ago, even a generation ago. That same principle applies to almost all of humanity today. As we sit here, any of you — or maybe more likely, any of our children — can take out the tools that many carry every day and transmit this discussion to billions across the world.

Now, in many respects, information has never been so free. There are more ways to spread more ideas to more people than at any moment in history. And even in authoritarian countries, information networks are helping people discover new facts and making governments more accountable.

During his visit to China in November, for example, President Obama held a town hall meeting with an online component to highlight the importance of the internet. In response to a question that was sent in over the internet, he defended the right of people to freely access information, and said that the more freely information flows, the stronger societies become. He spoke about how access to information helps citizens hold their own governments accountable, generates new ideas, encourages creativity and entrepreneurship. The United States belief in that ground truth is what brings me here today.

Hillary’s internet speeches show beyond plausible cavil that she was keenly aware of the dangers of global connectivity: bad actors can use — and abuse — such global access.

And there is more in relation to Russia. The Clinton Foundation reaped millions from a donor who at roughly the same time helped broker the sale of 20 percent of our uranium supply to Putin’s Russia. Also, Hillary never objected to Team Obama’s making a secret deal on missile defense tailored to Moscow’s wishes: Obama told (0:32) Russian president Dmitri Medvedev over an open mic that after the 2012 election he would have “more flexibility.” This is Beltway-speak for making additional, politically risky concessions — in this case, contrary to the ardently expressed wishes of our nervous Eastern European allies.

Finally, there is the matter of the Classified Information Nondisclosure Agreement (Form 302) that Hillary signed:

2. I hereby acknowledge that I have received a security indoctrination concerning the nature and protection of classified information, including the procedures to be followed in ascertaining whether other persons to whom I contemplate disclosing this information have been approved for access to it, and that I understand these procedures.

3. I have been advised that the unauthorized disclosure, unauthorized retention, or negligent handling of classified information by me could cause damage or irreparable injury to the United States or could be used to advantage by a foreign nation. I hereby agree that I will never divulge classified information to anyone unless: (a) I have officially verified that the recipient has been properly authorized by the United States Government to receive it; or (b) I have been given prior written notice of authorization from the United States Government Department or Agency (hereinafter Department or Agency) responsible for the classification of information or last granting me a security clearance that such disclosure is permitted. I understand that if I am uncertain about the classification status of information, I am required to confirm from an authorized official that the information is unclassified before I may disclose it, except to a person as provided in (a) or (b), above. I further understand that I am obligated to comply with laws and regulations that prohibit the unauthorized disclosure of classified information.

7. I understand that all classified information to which I have access or may obtain access by signing this Agreement is now and will remain the property of, or under the control of the United States Government unless and until otherwise determined by an authorized official or final ruling of a court of law. I agree that I shall return all classified materials which have, or may come into my possession or for which I am responsible because of such access: (a) upon demand by an authorized representative of the United States Government; (b) upon the conclusion of my employment or other relationship with the Department or Agency that last granted me a security clearance or that provided me access to classified information; or (c) upon the conclusion of my employment or other relationship that requires access to classified information. If I do not return such materials upon request, I understand that this may be a violation of … United States criminal law.

8. Unless and until I am released in writing by an authorized representative of the United States Government, I understand that all conditions and obligations imposed upon me by this Agreement apply during the time I am granted access to classified information, and at all times thereafter.

And the coup de grace:

12. I have read this Agreement carefully and my questions, if any, have been answered. I acknowledge that the briefing officer has made available to me the Executive Order and statutes referenced in this agreement and its implementing regulation … so that I may read them at this time, if I so choose.

Having signed this document, under oath, means Hillary is charged with all required knowledge therein, a concept fully understood by any graduate of Yale Law School. Thus, any hacking into her emails by foreign powers are intrusions for which she bears responsibility. In consciously disregarding known, serious risks, she acted not only grossly negligently but also recklessly.

This made her not only a Russian asset but also a Chinese asset, a North Korean asset, an Iranian asset, etc.

John C. Wohlstetter is author of Sleepwalking With the Bomb (2012).