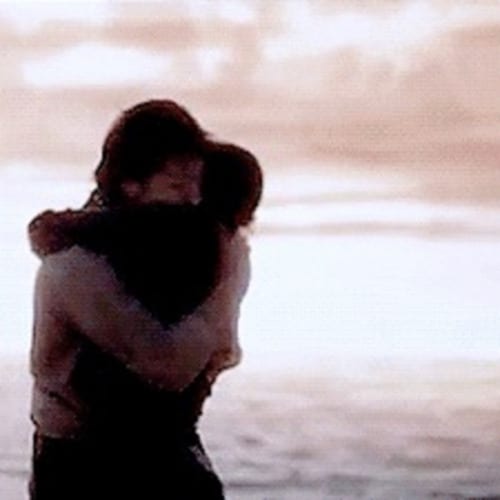 Alongside the advent of Eastertide and springtime has come the digital, DVD, and Blu-ray release of the highly acclaimed Star Wars spin-off Rogue One: A Star Wars Story (85% Rotten Tomatoes, 3.5/4 Rolling Stone). All in all, an engaging sci-fi tale that is gutsier and grungier than any previous Star Wars flick, and that’s a good thing! It’s not what you’d expect from a typical Star Wars movie, yet it feels like home to lovers of the classic 1977 Star Wars.

The film is epic, notwithstanding its various flaws in narrative-building and character construction. Not only does it offer a satisfying origin story for Luke Skywalker’s Rogue Squadron (for all you hard-core Star Wars fanatics), but it gave us an exciting backstory to the events that started it all in A New Hope. It delighted viewers of all ages by taking us back to the characters, plot devices, and theatrics that drew us into the Star Wars franchise in the first place.

While there are a plentitude of topics to entertain from the latest installment of this enthralling space opera, we will tap into the dark side of Rogue One. But if you want to hear more about the Rebels and their cause be sure to check out “Rogue One: The Force Within and a Christmas Message,” by Melissa Mackenzie.

Rogue One championed the heroics and grit of the Rebel Alliance, while also exposing their moral foibles. However, the real focus of this Star Wars Story is the Empire. As A. O. Scott of the The New York Times said, “Masquerading as a heroic tale of rebellion, the true spirit of Rogue One is Empire all the way down.” From the debut of Director Krennic’s formidable Death Troopers to the uncanny reappearance of Grand Moff Tarkin in all his vainglory, and finally, to the disturbing yet bedazzling spectacle of Darth Vader’s stylized evisceration of numerous ill-fated rebels, Rogue One artfully demonstrates the villainy, vanity, and insurmountability of the Galactic Empire.

“What does that got to do with anything?” you may ask, parroting the impudent Anakin soon-to-be Dark Lord of the Empire. My response, unabashedly taken from Jedi Master Yoda himself, “Everything.”

One motif running throughout the Star Wars mythos like midichlorians through the Skywalker lineage is that power corrupts, especially when concentrated in an imperious regime or sovereign and is in direct opposition to the moral order of the universe (a la the Force) and therefore must be fought against by all freedom-loving beings. Like the original trilogy, Rogue One displays the menace of an authoritarian State–one that is so universal and omnipotent to get away with frequent massacres having assumed control over the entire galaxy by enforcing its will through terror. This interplanetary Leviathan appears on the surface level as a shiny, pristine, galactic police force supposedly in power to establish peace and justice, though completely on it own terms. Yet as all the movies progress the totalizing Empire is revealed for what it really is, a mechanized malevolence empowered by an otherworldly darkness set violently against all things good, true, and beautiful.

Contrast this political disposition with that of Star Trek’s. Star Wars sees its Empire, and even its Old Republic, as draconian and corruptible and exhibits a dystopian perspective of consolidated bureaucratic power. Star Trek upholds a utopian (i.e. ultra-liberal) vision of expansive federal powers via its United Federation of Planets. Star Wars presents a Hobbesian state in an Orwellian context, whereas Star Trek supports a Rousseauian government in a Kantian milieu. The former has a pessimistic (realistic) view of centralized government, but the latter harbors a romantic positivism for big (interstellar) government. Politically speaking, Star Wars is realism, whereas Star Trek is idealism. 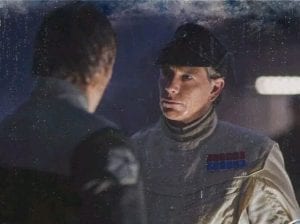 Though careful not to glamorize the prowess of authoritarian militarism, Rogue One thematically illustrates the vileness of the Empire in the first act with the discourse between Director Orson Krennic and the defiant Galen Erso, which goes as follows:

Krennic: “We’re on the verge of greatness. We were this close to providing peace and security for the galaxy.”

Krennic: “Well, you have to start somewhere.”

These lines elicit a microcosm of the moral travesty that is the Imperial will to power. Krennic, Tarkin, Vader, and all the other bureaucratic baddies would swiftly raise a glass to the belligerent adage of Otto Von Bismarck: “The great questions of the day will not be settled by means of speeches and majority decisions but by iron and blood.” For the Empire, the end always justifies the means. 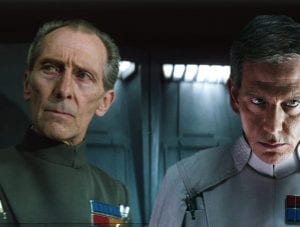 Additionally, when viewing the activities, atrocities, and dialogue of the Empire’s finest in Rogue One, one quickly realizes the innate self-centeredness and hubris that seems to undergird the entire Imperial bureaucratic order, as exemplified in Krennic’s angered response to Tarkin’s arbitrarily assuming command of the Death Star: “We stand here amidst my achievement!” It is pride that is the prime motivator for the Imperial technocrats (Krennic and Tarkin) as well as the chief source of power for the Dark Lords of the Sith (Darth Vader and Emperor Palpatine). Pride, according to C.S. Lewis is “the complete anti-God state of mind,” and is the cause of every other evil and vice in existence. Yet, as we gleefully witness in the next movie(s), the arrogance of the Empire becomes its own downfall.

Like the Good Book says in Proverbs 16:18, “Pride goes before destruction, and a haughty spirit before a fall.”

However, as Rogue One ends with a message of hope despite the off-screen genocide and the fiery deaths of all the main characters, so too this monograph will close with bitter-sweet sanguinity.

“We have hope. Rebellions are built on hope.”

“Be careful not to choke on your aspirations….”

“I fear nothing. All is as the Force wills it.” 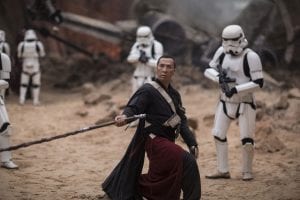 Destined to be some of the most iconic and inspiring lines of 21st century pop culture, and which may, due to multi-generational affinity for Star Wars lore and one-liners, so inundate our zeitgeist that these ideas and ideals remain not simply a part of our familiar past but become ingrained in our collective consciousness and thus influence our future. Going from a cultural phenomenon to an existential disposition, for better or worse, only time will tell.

For some this is just another sour note on the pages of our society’s intellectual death dirge. For others this is a fool’s inexplicable desire to impart significance to a meaningless reality. But to those ‘Force-sensitive’ sci-fi fans and pensive truth-seekers these quotable quips are clarion calls to the transcendent and reminders of our metaphysicality urging us to consider the spiritual realm, to pursue the Good, to forsake and fight Evil, and to “trust the Force” (i.e. God). 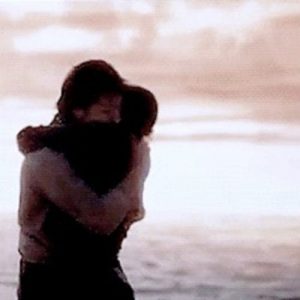