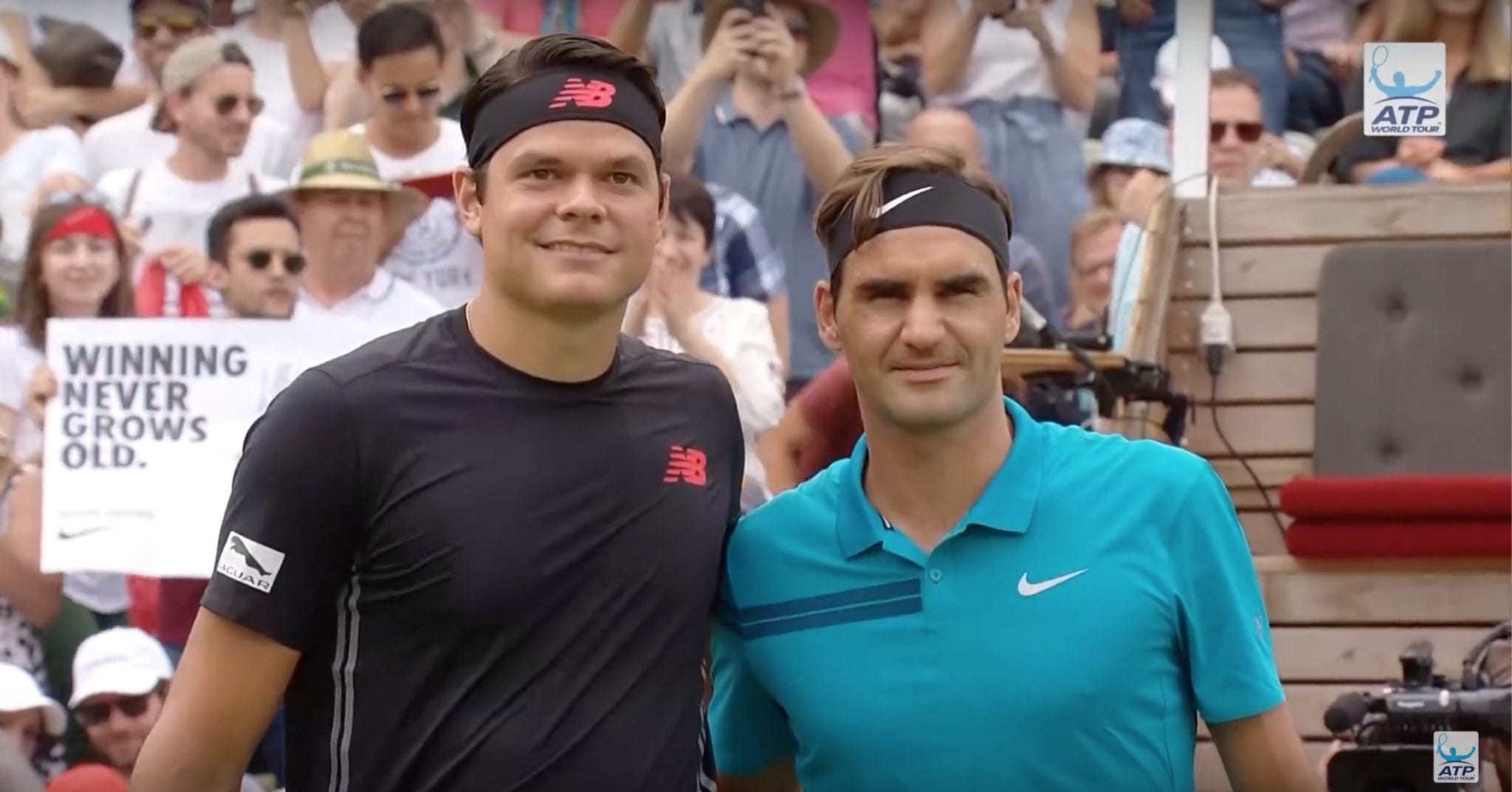 Roger Federer holds his first serve against Milos Raonic, who held his own first game rather more handily. It is the second set of the Stuttgart Open final, the surface is grass. The top player of the century is back in action following a great start (winning the Australian Open) and a two and a half month timeout during the clay season.

On the third ad-point, he forces Raonic to return the serve with his forehand, with which he sends the ball almost gently into the open court on the deuce side. Raonic does not run for it, so we can guess “gently” is a manner of speaking, about 80 mph. You cannot be sure on TV, a lying medium.

Raonic has ten kilos on Federer and 10 cm and is ten years younger, and just from casual observation, even on TV, which distorts, he has got to have one of the great serves in the history of this sport. The grass makes it go even faster, lower; the balls skid. Raonic beat Tomas Berdych in the quarters largely thanks to this serve, as well as Lucas Pouille in the semis. Every match he has played here in this lovely old capital city of Germany’s prosperous Baden-Wurtenberg has required at least one tiebreak. Federer broke at 4-4 in the first set and held serve at love to close it out, underscoring the stark fact of the big Canadian’s dependence on his service games.

My bet is that this match will not include a tiebreak, but you never know. Raonic was born in Titograd (Podgorica) but he grew up in Canada. His languages are Serbian and English. He has been ranked as high as number 3 worldwide, and is by far Canada’s best known and most successful player. He has improved his game constantly over the years, fought back against serious injuries. This year he is working his way back toward the elite, having been sidelined by off-and-on physical problems much of the last year. Federer, who had to take half a season off in 2016 to recover from injuries, saluted the younger man’s resilience, welcomed him back. Giving him a tough game is the best compliment. Moreover, he has never won Stuttgart. Then he heads north to Halle, where he is the defending champion, and after that across the sea to England and Wimbledon, where he is an eight-time winner (a record) and likewise the defending champ.

Raonic has a better ground game than most other big service men, such as Sam Groth or Ivo Karlovic; his is rather like Americans John Isner and Sam Querrey. All are basketball center-sized and have worked to develop astute deep strokes, favoring the forehand, as well as seriously dangerous net games. In the eleventh game of the second set, Raonic three times in a row goes to the net directly after serving and makes two of his tries, one of which clinches the game, pressuring Federer who wants to avoid a third set.

However, most observers would argue that among the very tall players, no one is as graceful and dangerous on the big forehands down the line as Juan-Martin del Potro. He has a gorgeous game, though it was not quite good enough to stop Rafa Nadal when they met in the semis at the Paris Open a couple weeks back. Maybe the up and coming German ace, Sascha Zverev, who is six-six, will be the first of the basketball sized tennis pros to make No. 1. But it will not happen as long as Nadal and Federer are competing.

Big in tennis these days means well over six-two, six-three. Federer is six-one, which is probably close to average. Raonic is six-five. Israel-born Denis Shapovalov, who with Raonic is likely to make Canada a contender in Davis Cup play for at least a few years, is six-oh. Argentina won its first Cup a couple years ago with a team led by Del Potro, the “giant of Tandil.” If Delpo stays healthy (he has been sidelined even more than Raonic) they will win more. Especially if his countryman Diego Schwartzman, who recently cracked the top ten with a great run at Roland-Garros, keeps improving. He is five-seven, so go figure.

The Stuttgart tournament, first held in 1916, is listed as a 250 on the ATP circuit, behind the 500’s and the 1000’s and of course the Grand Slams. It is being watched closely by the fans due to the presence of Roger Federer, whose absence some observers felt made the clay season one-sided and dull, though in fact Nadal met tough challengers, such as Schwartzman and the finalist Dominic Thiem, who contrary to Mr. Pleszczynski’s druthers is Austrian not Vietnamese. Federer showed a bit of rust at the start, needing three sets to win his first match here, against Mischa Zverev (Sascha’s older brother), and the genius but mercurial Aussie, Nick Kyrgios, who took him to the wire in the semis. He wears a blue kit designed by Nike. Milos is wearing black, and sports the New Balance logo. They will make plenty of money here, both of them. Stuttgart is rich. The Stuttgart Open gets the Mercedes Cup. Mercedes is to Stuttgart as Schlitz is to Milwaukee, which does not have a tennis tournament of this stature. However, Tim Smyczek. a fine American player who, like Diego Schwartzman, is no taller than Mark Falcoff or Joseph Epstein, is from Milwaukee.

You win a Mercedes-Benz if you win at Stuttgart, and I guess you would win a case of Schlitz if there were a Milwaukee Open and they sponsored it. I have urged Mr. Tyrrell, who drives a Mercedes-Benz automobile, to take note of this fact.

Another fact of note about this tournament is that the 1954 winner, according to the internet website Wikipedia — which I confess to not having verified by another source — was Gottfried von Cramm. If correct, this means he won at age 45, having been on the German Davis Cup team in the 1930s. I have to imagine he was one of the great sportsmen of his time and generation, and a righteous dude. He was incarcerated by the Nazis, sent to the eastern front during the war, and here he was, rebuilding the family fortune and playing tennis and winning at a tournament in Baden Wurtenberg, and he a Saxon. That man had real class, as his friend Don Budge well knew. If it hadn’t been for Budge and a few others — including the King of Sweden — the Nazis might well have killed him, but before they could make up their minds as between the garrote and the ax and the meat hook, their preferred instruments for killing the German aristocrats whom they hated with the twisted envy of the lowlife thugs they were, the war broke out and he demanded the right to rejoin his regiment — Nazis be damned, this was duty.

I see I am slipping into bar stool sports blather here, though most of it is accurate. Von Cramm represented a certain style and morality that seems almost alien it is so rare. If you want another example, observe the character played by Eric von Stroheim — a German-American Hollywood power in his day — in the film by Jean Renoir, La Grande Illusion. Von Cramm was rather better looking than the great von Stroheim, and he had an unusual romantic life for a German of his times — not the homosexuality, real or exaggerated by his enemies amongst the national-socialist rabble, but in his choices of wives, first a beautiful Jewish woman whose life he saved, after the war the doomed Barbara Hutton.

Meanwhile, no one has broken serve in the second set and Federer is serving at 4-5, holds easily. At 5-6 (due to Raonic’s beautiful serve and volley play in the 11thgame), Federer is down 0-30, but four great serves in a row tie it up. So it goes to a tiebreak after all.

They are both holding at the changeover, 3-3. A big ace to the T and Federer is at 4-3. Federer’s service is often overlooked because his all-around game is so good; it is well worth studying: it is one of the best, on the Tour. Raonic will hit more aces, as will John Isner. But Federer has the ultimate clutch serve. This match is a case in point.

Raonic doubles, third time in the match. He goes up to the net on second serve, a mistake, Federer passes him with an elegant crosscourt forehand, and he has two minibreaks, 6-3, serving for match. The first serve is long. Raonic returns the second, Federer sends him back a forehand, they stay on the baselines, and then Federer puts the ball by Raonic’s feet and Ontario’s favorite sportsman, who does not play hockey or basketball, nets it. Game, set, match! It’s on grass, and there’s Roger Federer, leading the Tour.