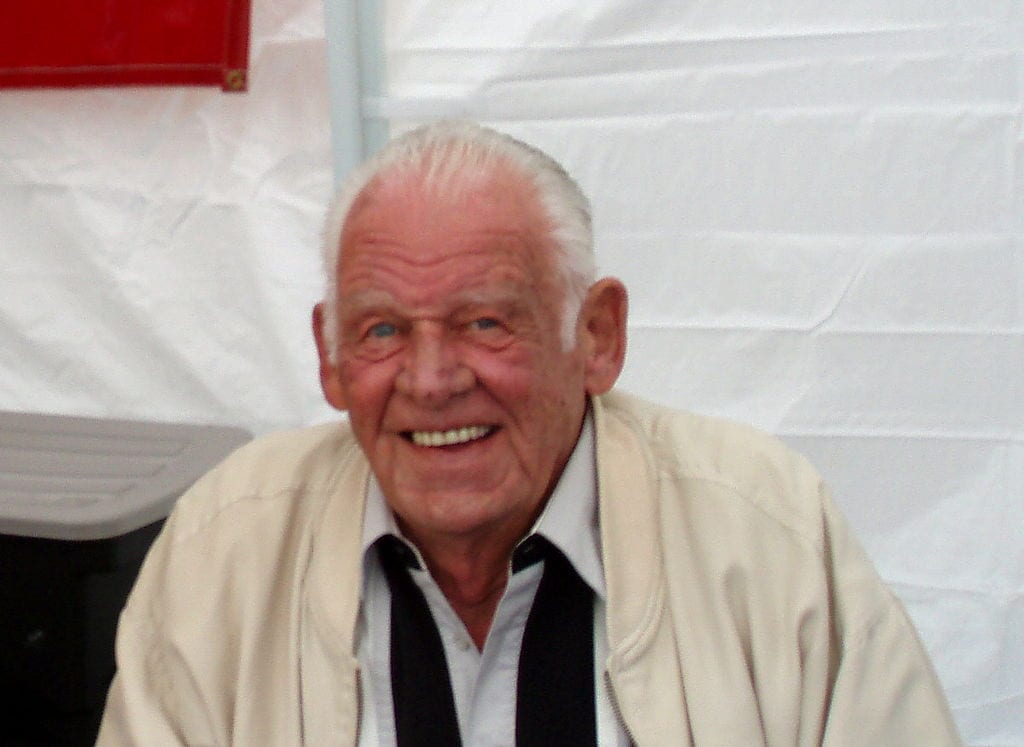 Larsen died of esophageal cancer in Hayden Lake, Idaho, where he lived with his wife of more than 60 years, Corrine. He was 90.

Film and pictures of Yogi Berra leaping into Larsen’s arms after Brooklyn pinch-hitter Dale Mitchell took a third strike to end the game, and called on television by the incomparable Vin Scully, are as well known to baseball fans, and about as oft-repeated, as that of Carlton Fisk working some body English to help keep his 12th-inning, walk-off home run fair in the fifth game of the ’75 Series. In just two hours and six minutes on that fall afternoon — baseball games lasted about that long back then — Larsen, with what you might describe as a checkered career to that point, worked his way into Yogi’s arms and baseball immortality. (The beloved Yogi died in 2015, also at 90.)

Many of the stories about Larsen this week have referred to him as a “journeyman,” and I guess he was. But his 1956 season that preceded the perfecto was pretty good. He was 11-5 with a 3.25 ERA in 180 innings pitched. If he were a free agent today, coming off of those numbers, he would probably be worth more than the Chrysler Building and the combined alimonies of the late Johnny Carson. Most of the rest of his career was unremarkable. He broke into the bigs in 1953 with the woeful St. Louis Browns. He was 7-12 with a 4.15 ERA that year with the last-place Browns. The next year the woeful Browns became the still woeful Baltimore Orioles, Larsen threw 202 innings for them and put together a horrific 3-21 record. This wasn’t all Larsen’s fault. The Orioles of that year were hardly a run-scoring machine, finishing last in that category with only 483 runs in 154 games, an anemic 3.1 per game. Vern Stephens led the team in home runs that year with eight.

Next year, Larsen went to the pinstripes, probably for a song. He was 9-2 and 3.06 for Casey Stengel’s boys in ’55 and then went on to 11-5 and post-season glory the next year. Even his ’56 Series was not an unalloyed triumph. He started the second game and didn’t make it out of the second inning. After Larsen had allowed a hit and walked four in an inning and two thirds, Casey has seen enough. After this, Larsen was more than a bit surprised to get the call for the fifth game. But the rest, as they say…

Larsen had a little help from his friends and plenty of luck in his perfecto. In the second inning, Jackie Robinson hit a hard grounder to Yankee third baseman Andy Carey that caromed off of Carey’s glove right to shortstop Gil McDougald, who threw Robinson out. (The old 5-6-3 ground out that, no, we don’t practice in spring training.) Later, in the fifth, Mickey Mantle covered about three zip codes in center field to haul in a drive by Dodger first baseman Gil Hodges that had triple written all over it.

The year after his famous no-no-no, Larsen was 10-4 and 3.73 as a spot starter with the Yanks. His pitching career went downhill from there and by 1959 he found himself demoted to the Kansas City Athletics, at that time a Yankee farm team in the American League. This is where the Yankees developed such players as Roger Maris, Art Ditmar, Ralph Terry, et al. It’s also where they kept Enos Slaughter stashed when they didn’t need him. (The A’s, of course, became a Major League team again after they moved to Oakland.)

After going 1-10 with the Athletics in 1960, he was sent to the minors. OK, I was kidding about the A’s being a Yankee farm team. They were nominally Major League. But imagine how Larsen must have felt learning he had been demoted by a team that would spend 13 years at Kansas City without ever playing .500 ball.

Larsen played Major League ball in the days when players had personalities rather than agents. Now too many of them sound like marketing majors trying to impress the professor. And they never quit telling the Baseball Babe after games how their team never quits. Larsen was considered a character even back then. His nickname was goony-bird, perhaps from a resemblance to the bird native to Pacific islands, though I don’t exactly see it. He was a big guy for the age, listed as 6’4 and 215 pounds in the day before this was about average for Major League pitchers. He had, uh, prominent ears and, how to put this, less than leading man looks. But no Yankee fan cared what he looked like 10/8/56.

From what I can read, our Don also enjoyed the night life and liked to unwind after games or practices with the help of adult beverages. He was known to do this in the company of Mickey Mantle, Billy Martin, and Whitey Ford, on-field warriors and off-the-field bon vivants who considered nighttime curfews an offense to the Bill of Rights, Magna Carta, and the Universal Rights of Man and Ballplayers. It has been suggested that Larsen’s powers may have been somewhat under a cloud the night before his greatest performance. Perhaps, some have said, even the morning of, though I cannot verify this.

After the indignity of being cashiered by the lowly KC A’s, Larsen lingered in the game, making brief and undistinguished tours with the Giants, White Sox, Cubs, Orioles again, and the Colt 45s (what we used to call Astros). He finished his career at 81-91 and 3.78 in all or parts of 14 Major League seasons. Nothing to write home about there. But on one fall day in 1956 in Yankee Stadium, the goony-bird was perfect, and became one of baseball’s unforgettables.