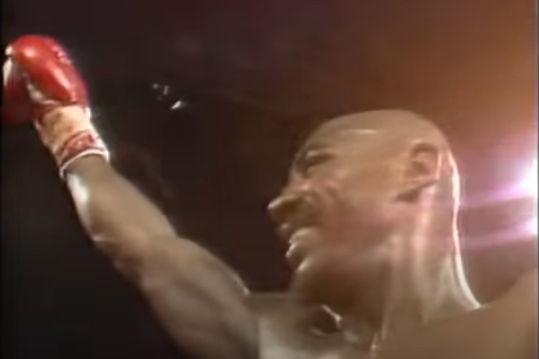 The boxing world is saddened to learn of the too-early death of former middleweight champion Marvelous Marvin Hagler. Hagler’s wife, Kay, announced that the champ died unexpectedly Saturday in their home in New Hampshire. He was 66.

No cause of death was given in her announcement, though one of Hagler’s sons, James, with a slightly different version of events, said Marvin was taken to a New Hampshire hospital Saturday morning with chest pains and difficulty breathing. He died a few hours later. Of course, it being the fad of the day, there is rampant speculation that Hagler’s death was COVID-related. Perhaps this will prove to be, but I counsel patience and skepticism until more is known. Chest pains and respiratory difficulties were hardly unheard of in 66-year-olds before COVID.

Regardless of the reason for his undoing, Hagler was one of the most skilled, toughest, and most entertaining middleweights in the history of the sweet science. His 1985 fight with Thomas “Hit Man” Hearns is counted by many as one of the best the fight game has ever offered, even though it lasted only eight minutes. The first round of that one may be the most exciting and intense ever. I’ve seen this fight, and I’ve seen “the thrilla in Manila,” both multiple times, and my vote is for Hagler/Hearns. Had these warriors kept up this pace for 12 rounds, they both would have to have been treated for exhaustion after the fight, as would have everyone who watched it. But it ended quickly and decisively in round three, with Marvelous Marvin still middleweight champion.

But there was much more to Hagler’s career than the memorable rumble with Tommy Hearns. Born in Newark, New Jersey, in 1954, Marvin moved with his family to Brockton, Massachusetts, in 1967 after the bloody Newark race riots of 1967. (Brockton is a famous boxing location for more than just Haglar. It’s the birthplace and longtime home of Rocky Marciano.) It was there he chose boxing as his career. Skill, hard work, sheer determination, and thousands of hours at the gym led in 1980 to a title shot against British boxer Alan Minter. Haglar cut Minter so badly that the fight in London’s Wimbley Arena had to be stopped in the third round. Haglar was undisputed middleweight champion of the world, a title he held and successfully defended 12 times until he lost it in 1987 in a hotly disputed split-decision to another boxing great, Sugar Ray Leonard.

Powerfully built and always in peak physical condition on fight night, Haglar was both a skilled boxer as well as a powerful puncher. He was a southpaw who could switch to righty when ring circumstances dictated. Like that other famous Brockton fighter, the Rock, Haglar liked to press the action. He was always on the offensive, never taking a round off, never giving opponents time to rest. He didn’t wait on his opponents to come to him; he was on them at the sound of the bell.

Haglar’s skill and style led to many exciting fights, including a high-profile 1983 brawl with another of the ring’s tough guys, Roberto Duran. Hands of Stone did what few had done against Haglar, which was to end the fight on his feet and make the business close. Haglar retired after his close loss to Leonard. Of his 69 professional fights he won 62, with 52 of them by way of knockout. He lost three fights, and two ended in draws.

In addition to appreciating Haglar’s skill and ferocity as a fighter, I also appreciated the fact that he was all business in the ring. No mugging or showboating of any kind, no taunting of his opponents, none of your Muhammad Ali nonsense that has so disfigured the ring, and other sports, during and after the time of the Louisville Lip. No frilly, girly outfits with flags and other decorations that so many contemporary fighters stoop to. Just a pair of black boxing trunks, white or black boxing shoes, and bring it on.

After his ring career was over, Hagler appeared in a number of less-than-distinguished action flicks, as many distinguished athletes have after leaving their games. Not many serious film fans will remember Indio and Indio 2. But serious fight fans will never forget Haglar/Hearns, and a good deal else of the distinguished ring work of Marvelous Marvin Hagler, a champ among champs.

RIP Marvin Haglar, a marvelous fighter, and by all reports a good and reliable man, in and out of the ring.