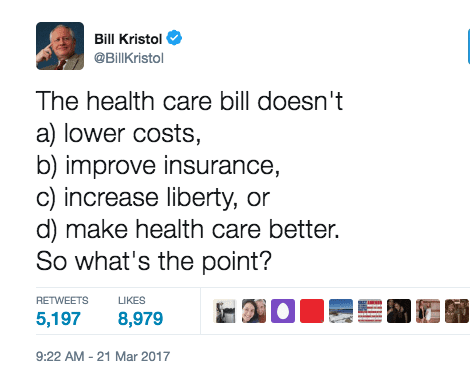 It’s been a while since I’ve agreed with the Weekly Standard’s Bill Kristol, but he’s spot on here: 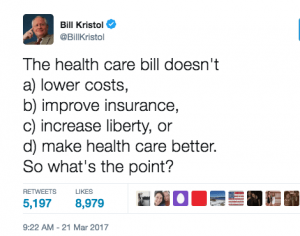 Indeed, Speaker Paul Ryan (Wisconsin) could do worse than cancel the floor vote today on the American Health Care Act (a.k.a. RINOcare).  In fact, expect the vote to be cancelled if the GOP leadership is far short of the 216 votes needed to pass RINOcare.  If the vote goes forward, then they either have the votes or are just a handful away and will try to twist some arms on the House floor.

How many votes the GOP leadership has is anyone’s guess.  Ryan claims they are close.  He seems to be the only one.  According to Alexandra Desanctis at National Review:

As of [Wednesday] afternoon, it seems [Rep. Mark] Meadows is correct that there remain enough opponents to tank the bill tomorrow; the GOP can only afford to lose 21 of its own members’ votes, along with all of the Democrats. According to a New York Times count, 22 GOP representatives are hard “no” votes, with another 17 who have serious reservations about the bill. And a recently updated Huffington Post piece suggests that there are at least 29 GOP representatives who are extremely likely to vote against the bill, while another 12 lean “no.”

RINOcare is a pathetic piece of legislation for reasons I’ve laid out elsewhere.  I won’t re-hash that here.  Rather, I want to raise the question of whether Ryan is cut out to be Speaker.

I hate discussing this since I encountered Ryan many times back when I worked for Investors Business Daily, and he always seemed like one of the nicer people in Congress.  He also has displayed talent as a policy wonk and did a very solid job as chair of the Budget Committee.  (Remember the eloquent case he made against Obamacare back in 2009?)

However, given his performance on RINOcare, I can’t help but wonder if he made a mistake leaving the chairmanship of the Ways and Means Committee for the Speakership.

For starters, why didn’t Ryan sit down with the entire Republican Conference and solicit their ideas on repealing and replacing Obamacare?  That would served as a starting point for drafting legislation as it would have given him a sense of the divisions between conservatives and moderates.

Instead of taking time to put together a bill that would have been assured of at least 216 votes before it was even introduced, he put forward legislation that split the party and has left him scrambling for votes.

As opposition to RINOcare became more vocal, Ryan should have said, “This is just a starting point.  We’re going to have a lot of talks and discussions before this is in it’s final form, ready for a vote.”  That would have signaled to the rank-and-file that he’d heard their complaints and was taking them seriously.  Rather, Ryan doubled down, issuing omens of doom.  The bill is “the closest we will ever get to repealing and replacing Obamacare,” he warned.  Later, he supported President Trump’s statement that Republicans could lose the House in 2018 if they don’t vote for RINOcare.  The warnings suggested not a Speaker who had control of the ball but one who had dropped it.

Granted, even the most skilled politicians will occasionally blunder.  Ryan can still pull the bill and go back to the drawing board.  And, he will have plenty of other issues to deal with this year where he could prove himself a competent Speaker.  But if he handles those the way he has handled repealing and replacing Obamacare, then his tenure as Speaker will be much like RINOcare: a disaster.