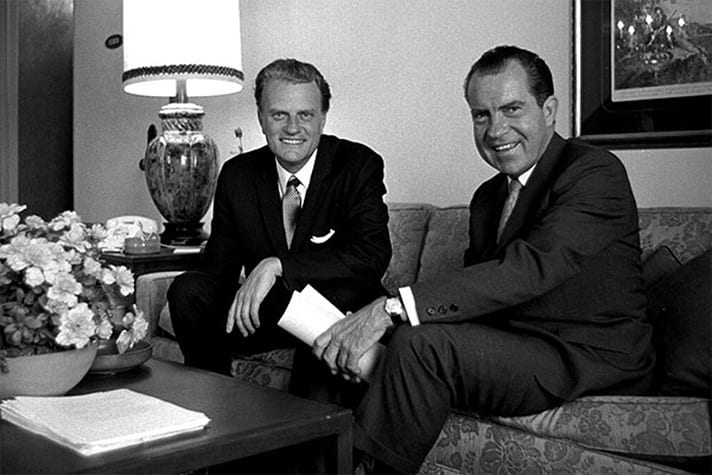 The rap on Billy Graham — and it wasn’t much of one, given the essential sweetness, you might say holiness, of his character — was that he hung around politicians, and especially presidents, too much: to the point of joining the power elite and dissipating his witness.

A certain kind of modern Christian seems to think that a Christian minister’s job is “speaking truth to power” — an old Quaker ideal lately turned into a rationale for detaching church from state. A minister, on this showing, is supposed to rebuke from a distance instead of counsel and comfort from close up.

The idea is that wielders of power, especially conservative ones, grow addled in the pursuit of their, and their constituencies’, aims. Didn’t Richard Nixon, a Graham friend (and Quaker-born), prove just that point? Graham decelerated his presidential relationships after Watergate, but the embarrassment he felt on account of the Nixon tapes, and his failure to reprobate Nixon in the way the media thought he should, damaged his image only a little. He had lived clean. He stayed clean.

The problem was, the field of ministry he had occupied to such acclaim was changing. An earlier America — the one he lived in when he began preaching, in 1938 — had broadly assumed the worth of a strong connection between politics and Christianity. I’m afraid you have to be of a certain age to get the point. You have to recall that announcers prayed before football games. You have to remember that Congress gave the Pledge of Allegiance a religious spin; we became (and remain so while saying the pledge) “one nation under God.”

It was natural for the powerful to incorporate into their circle a gifted evangelist — e.g., Billy Graham — who would remind powerful and non-powerful alike of America’s dependence on God.

Billy Graham in that sense began strong. But the 1960s brought in a dispensation that spread across the land. Fewer and fewer Americans, proportionately at least, understood the point of Graham’s entreaties to repent and accept Jesus Christ as Lord and Savior. What was the point? they wondered. The political game pulled away from the religious task, to become the horse Americans put their money on for success and the fulfillment of dreams.

I am not aware of the developments’ surprising Billy Graham terribly much. He knew his Bible: not least his Old Testament. He remembered — how could he not? — the kings and emperors who had disfigured their calling as servants to the Almighty. He remembered the pride of Pharaoh. He recalled the Psalmist’s injunction to eschew the putting of trust in mere princes.

And he noticed (I have not read this; I infer it, but properly so, I think) that counseling presidents was just part of good works, and nothing more — not an element in the construction of an impossible “Christian nation.”

A president needed the Gospel no less than did a bookkeeper. Neither enjoyed exemption from sin. Both required the saving love of Jesus Christ. Politics was no instrument of salvation. It was a method of imposing on human disorder a certain — putatively benevolent — level of order; guaranteeing basic liberties; protecting rights; undergirding civility; doing the basic stuff of life in order that humans might use their inventiveness and worthwhile instincts for the general good.

I do not think Billy Graham was ever up to anything grosser or demoralizing than reminding his vast flock, his cure of souls, that the Son of God had died for their sins: in consequence of which they had acquired certain duties, starting with love, good old basic love. I do not think he sought the powerful because they were powerful. Rather, for a time they recognized in him a power more consequential than any they themselves wielded.

I generalize, naturally. How do I know Sen. A or President B didn’t say, “Let’s use Graham to help turn out the Baptist vote?” I suppose it could have happened — but if it did, it likely happened a lot less often than secularists and the truth-to-power lobby imagine. A good man was Billy Graham. I am glad I heard him a long time ago, accompanied by Ethel Waters and George Beverly Shea. There was a cleanness and a joy about the experience: more than at any place I ever marked a political ballot.