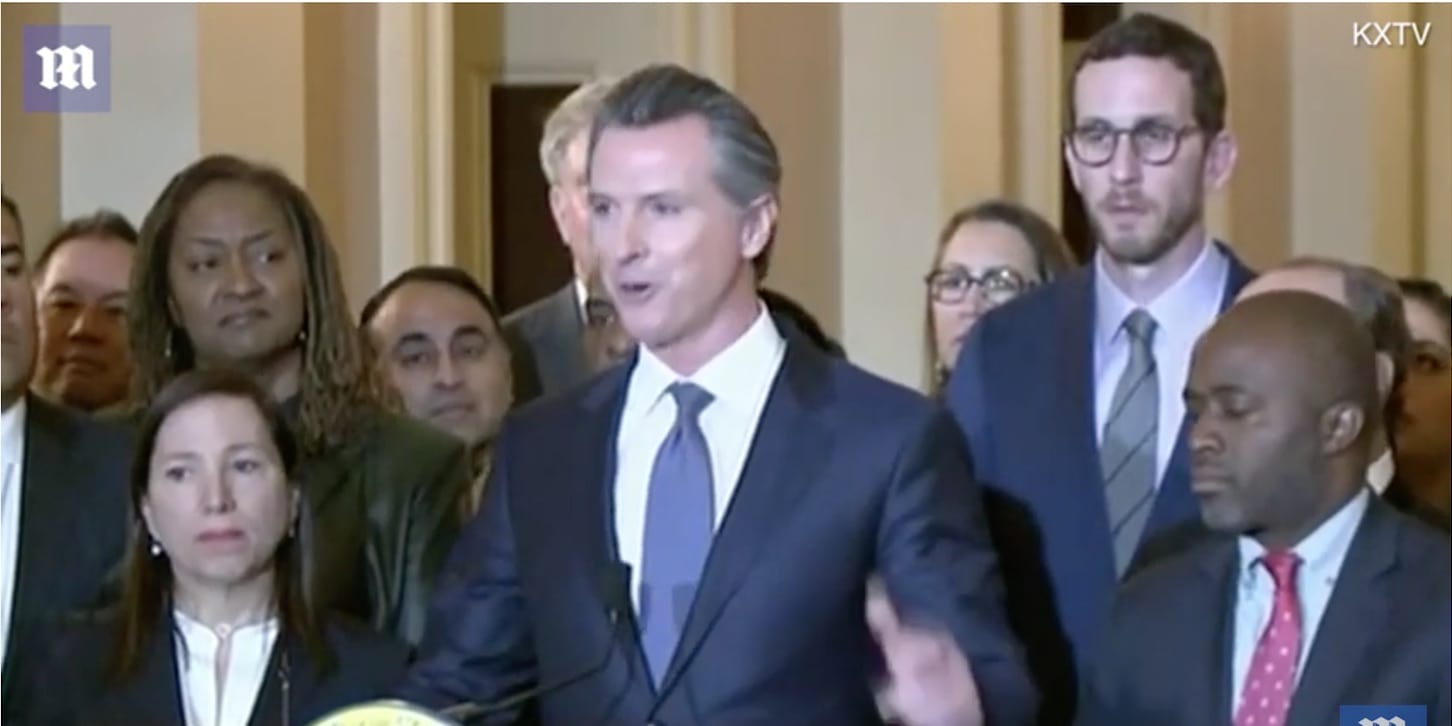 California’s newbie governor, Gavin Newsom, with a sure feel for irrelevance and non sequitur, signed an order Wednesday placing a moratorium on state-sponsored criminal executions in California. And just in time too, with all those guilty souls going to their Maker, who has every reason to be cross with them, courtesy of the State of California.

Just kidding of course. Executions in California, save for criminals executing their rivals and/or executing law-abiding citizens, are rarer than Episcopal bishops with good sense. A total of 737 mostly murderers put on death row by California judges and juries will now not have to worry about being put to death by the Golden State. But then they weren’t worrying about it anyway. The last execution is California was in 2006 (when the Cortez girl was just starting high school). There have been only 13 executions in California since 1972, though California jurors have sent hundreds to death row.

Californians, and a motley of Mexicans, Colombians, Salvadorans, and others fetched up there illegally at our expense and convicted of murder, have more chance of being struck by lightning while being bitten by a shark than of being ushered to Hell through the execution chamber at San Quentin State Prison. For all I know the life expectancy of Californians on that state’s death row may be higher than that of the state generally.

It’s not at all clear why Newsom should order this just now, other than the headlines and the network face time, of course. It’s about as relevant as a moratorium on rock concerts in Riyadh. It puts a sudden end to something that wasn’t happening anyway, and wasn’t likely to happen.

There has been some pushback in California, mostly from families of murder victims, police, and prosecutors. I’m sure some jurors who put in serious time wrestling with evidence and the difficulties surrounding the penalty of penalties, are less than pleased as well. But Newsom, in typical progressive arrogance, dismisses the concerns of these people, and of the 53 percent of Californians who voted against a proposition in 2016 that would have put an end to the death penalty. Newsom clearly believes he is a more morally sure-footed and a much deeper thinker than the majority that voted to keep the death penalty, against which he trotted out the usual unsupported charges.

“Our death penalty system has been, by any measure, a failure,” Newsom said, demonstrating a firm grasp of the obvious. No trick at all in concluding that any death penalty system that leaves convicted murderers on death row longer than Methuselah spent on the planet is bound to be a failure.

Newsom added, “It has provided no public safety benefit or value as a deterrent.” This claim is asserted time and again by the political left. But it has never been supported by evidence, and it’s counterintuitive. My own guess is the death penalty doesn’t deter many murders, but to assert it has no value as a deterrent one is obliged to believe, “There ain’t nobody afraid of dying.” This is obviously false.

“Most of all, the death penalty is absolute, irreversible, and irreparable in the case of error,” said our Gavin. Absolutely true, though error in these cases is very rare, certainly rarer now than in the past, and the mechanisms set up to prevent this error are massive and effective (accounting for the fact that some residents of California’s death row are older than Larry King, and have grown fat and sleek on that state’s hospitality).

This last concern is one of the defining characteristics of today’s toxic Left. On that side of the equation, government officials and careerist politicians are more concerned with the possibility of an innocent among thousands of guilty going unjustly to his grave than that tens of thousands of victims of abortion never see life at all. And all of these would-be people are innocent. Every last one of them. Some may grow up to be monsters. Heck, one of them might even become governor of California. But at the time they are chosen out of this world, a malignant choice the Gavin Newsoms of the world defend, they are the very soul of innocence. Too bad they don’t have the political juice that convicted murderers do. At least in Gavin Newsom’s moral calculus.