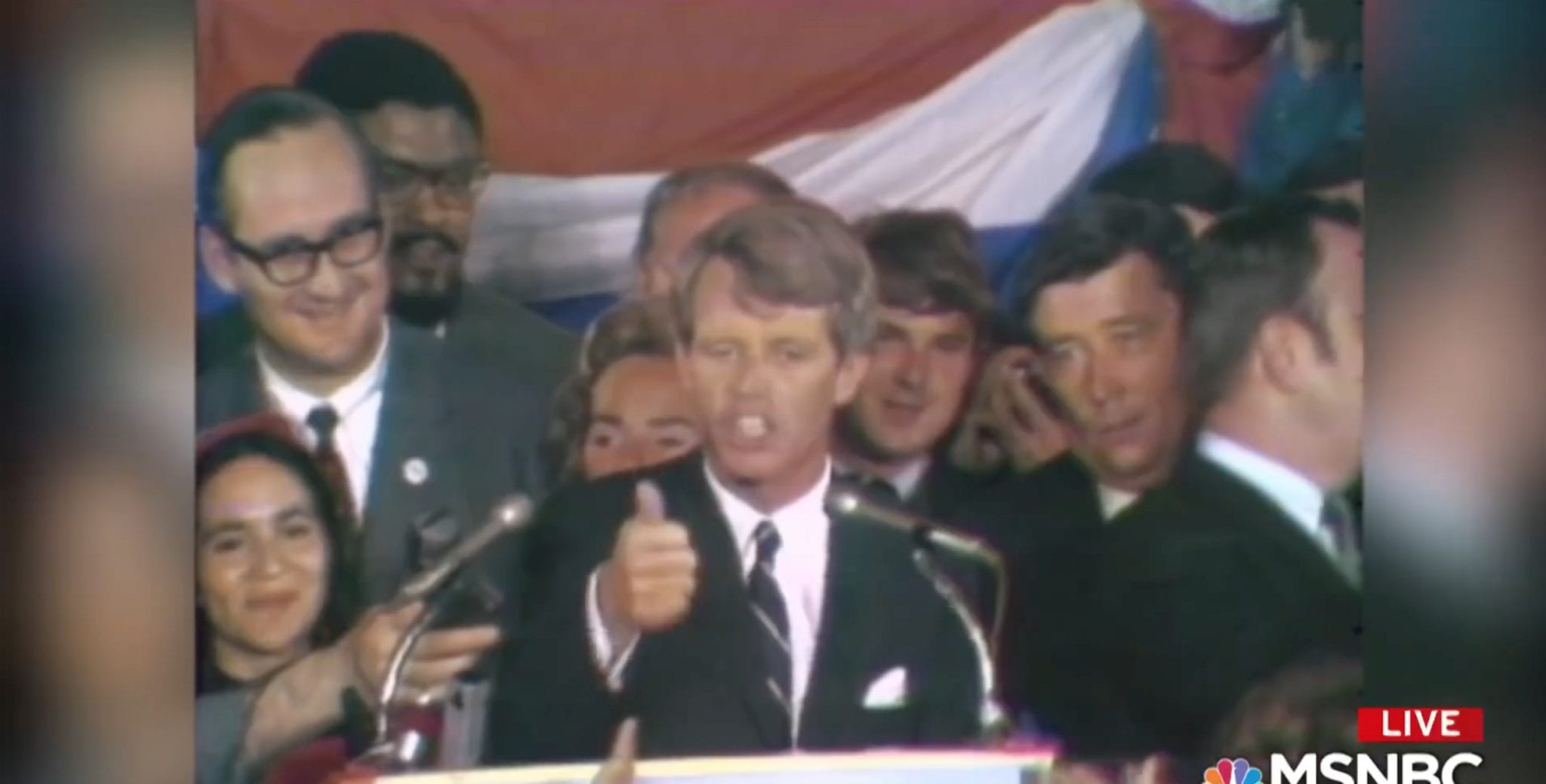 To be seventeen years old was to be awed by the history of the moment. And tearful.

Two days earlier my teenage political hero, Senator Robert F. Kennedy, had been assassinated. Everyone in America looked on the television and still pictures of the moment in shock and horror. Then came the tears.

Living in our new home of Allentown, Pennsylvania, where we had moved because of my father’s job as a hotel manager, I was a devout RFK fan. Somewhere in the family archives is a magazine solely devoted to the idea that Bobby Kennedy was the next president — in 1972. As I began to learn, life — and death — happens. History happens. Events were in such chaos by early 1968 that the Kennedy-for-President campaign suddenly was launched in March. Minnesota Senator Eugene McCarthy was causing President Lyndon Johnson major headaches in Democratic primaries — and the pressure by his friends and supporters to seize the moment finally produced the moment when Bobby Kennedy rose to a podium in the Senate Caucus Room and announced his candidacy for president. It was lost on no one watching that this was the same room where Senator John F. Kennedy had announced his candidacy in January, 1960. As if that were not enough of a tribute to his brother, RFK began with the very same line JFK had used eight years earlier:

“I am announcing today my candidacy for the Presidency of the United States.”

With that speech, the whirlwind began. The next 80 days America would witness one of the most remarkable campaigns to that moment in presidential campaign history. Wherever he went the crowds were stunning, and in a time when America had not yet learned the lessons of security for presidential candidates he not only had no Secret Service protection but rather relied on one security aide who would hold on to him as thousands of hands reached out to touch and grab him.

I was, of a sudden, a candidate myself — for student body president. In my new school for a mere year, I was up against the incumbent vice president, a great kid and the standard popular athlete. My teacher thought one-candidate races were not healthy, although he urged me to run for a lower slot because I was so new I was unknown and couldn’t win. Inspired by my hero, I ran for president anyway. When the moment came for the candidates’ speech to the 2,000 kids in the student body, I stood up, and opened with a Kennedy quip about cutting my hair. Since I was a native of Massachusetts my Bobby-imitation was spot on. The kids roared with laughter, and I won in an upset.

I had sent away for Kennedy campaign stuff and received a bumper sticker, a poster, and a newly minted official campaign button in response. The button sits on my desk now — small, the top half orange, the bottom half blue, with “Kennedy” stamped in white in the middle.

By chance a television celebrity of the day, CBS variety host Garry Moore, came to Allentown to campaign for — Gene McCarthy. My very Republican Dad learned Moore was staying at his hotel and arranged for his Kennedy supporting son to have a drink (read: a Coke!) with the McCarthy celebrity. It was a great conversation. Moore was convinced — as were many liberals of the day — that JFK’s brother Bobby was a ruthless SOB — ruthless being an all too frequent description of RFK that had attached itself to him years ago when managing brother Jack’s presidential campaign. As such he would be dangerous in the Oval Office, if all that baggage didn’t sink him in November to begin with if nominated. Suffice to say — I disagreed!

I was sold many times over for Bobby. Without doubt this sprang from my idolizing JFK at an even earlier age. All of this Kennedy-thing was somewhat eye-rolling for my Republican parents. In Northampton, Massachusetts, they had both been players in Republican politics. Dad held Calvin Coolidge’s seat on the Northampton City Council and had been the Republican City Committee chairman. Mom was the chair of the Hampshire County Republican Women. On a trip to Washington as a chaperone for the city’s high school kids on their annual D.C. field trip, while they were off on a tour Dad was invited for a cup of coffee in the Senate cafeteria by JFK himself. Dad liked him a lot — although until the end of his own life decades later he loved to recount that JFK stuck him with the bill as the good Senator had no cash on him.

So as 1968 arrived, Mom and Dad were for Nixon — and the kid for Bobby. Then — tragedy. Coming a mere two months after the assassination of another hero, Dr. Martin Luther King, Jr. — I confess I sobbed my teenage eyes out. The bright shining light of the campaign had gone out in the worst of American nightmares. When it became evident that the Kennedy family was bringing RFK back to New York where he would lie in state in St. Patrick’s Cathedral — with the Cathedral open for the public to pay respects — I wanted to go. To her eternal credit my Nixon-supporting Mom got us two bus tickets to New York. We made our way to the Cathedral — and stood in line for, as I recall, something like six hours. Finally we were inside. I walked by the casket, stopped for a second and reached out to touch the flag. For some reason I recall the honor guard were not the military but Kennedy friends, and the one I remember seeing was the then-NBC anchor David Brinkley. Eventually we were back outside and retreated home.

Ten years later, shortly after arriving in Washington to work as a press secretary for Pennsylvania’s Congressman Bud Shuster, I attended a memorial service at RFK’s grave, open to the public and hosted by his family. I went again for the 20th anniversary in 1988 and the 25th in 1993. I have the programs from each always close at hand, one of them framed — a print of a portrait of RFK wearing what I assume is his brother’s presidential leather bomber jacket, hair tousled, hands in chino pockets. Inside is this Kennedy quote from a visit to Peru in 1965:

The message — that challenging a not-so-good status quo was an obligation had long since been received by me. Eventually, need I say, I was, by 1980, “Reaganized.” By then I was much better read than my younger self and could connect the dots about how I went from RFK to Ronald Reagan’s Revolution. Somehow it didn’t seem like that much of a leap to me (although I bet his family would disagree!).

But perhaps it is best to note here that Robert Kennedy was awarded a congressional gold medal in November of 1978. The award is traditionally presented to the honoree or, if deceased, the honoree’s family, The president in 1978 was Democrat Jimmy Carter — and in the day the rivalry between Carter and Senator Ted Kennedy was, shall we say, growing. A year later Ted Kennedy would be opposing Carter for re-nomination. Suffice to say, inviting the Kennedy family to the White House to present Robert Kennedy’s gold medal was not on Carter’s agenda.

Move ahead to another June day — June 5, 1981. President Ronald Reagan has invited the Kennedy family to the White House Rose Garden — where he will present the medal to Ethel Kennedy. Said the President:

Robert Kennedy’s service to his country, his commitment to his great ideals, and his devotion to those less fortunate than himself are matters now for history and need little explanation from me. The facts of Robert Kennedy’s public career stand alone. He roused the comfortable. He exposed the corrupt, remembered the forgotten, inspired his countrymen, and renewed and enriched the American conscience.

Those of us who had our philosophical disagreements with him always appreciated his wit and his personal grace. And may I say I remember very vividly those last days of the California primary and the closeness that had developed in our views about the growing size and unresponsiveness of government and our political institutions. Among the last words he spoke to this Nation that night in Los Angeles were, “What I think is quite clear is that we can work together in the last analysis, and that is what has been going on within the United States — the division, the violence, the disenchantment with our society; the divisions, whether it’s between blacks and whites, between poor and more affluent, or between age groups or on the war in Vietnam-is that we can start to work together. We are a great country, an unselfish country, and a compassionate country.”

… And it is in the final triumph of Robert Kennedy that he used his personal gifts to bring this message of hope and love to the country, to millions of Americans who supported and believed in him. “Come my friends,” he liked to quote the Tennyson lines, “it’s not too late to seek a newer world.” And this is how we should remember him, beyond the distinguished public service or our own sadness that he is gone.

His friend, composer John Stuart, said about him what he said about the first fallen Kennedy and about us: that when a chill wind takes the sky, we should remember the years he gave us hope, for they can never die.

President Reagan, as was always true in moments like this, had it exactly right. It is ironic indeed that this June week marks as well the fourteenth anniversary of his own passing.

I am no longer seventeen years old. But there is not a day when I don’t think of Robert Kennedy and try and apply another piece of Kennedy wisdom that in fact he took from the Irish playwright George Bernard Shaw, and made a theme of that 1968 campaign:

Jeffrey Lord
Follow Their Stories:
View More
Jeffrey Lord, a contributing editor to The American Spectator, is a former aide to Ronald Reagan and Jack Kemp. An author and former CNN commentator, he writes from Pennsylvania at jlpa1@aol.com. His new book, Swamp Wars: Donald Trump and The New American Populism vs. The Old Order, is now out from Bombardier Books.
Most Popular
1
Hither and Yon
POTATUS Speaks, A Nation Groans
by Scott McKay