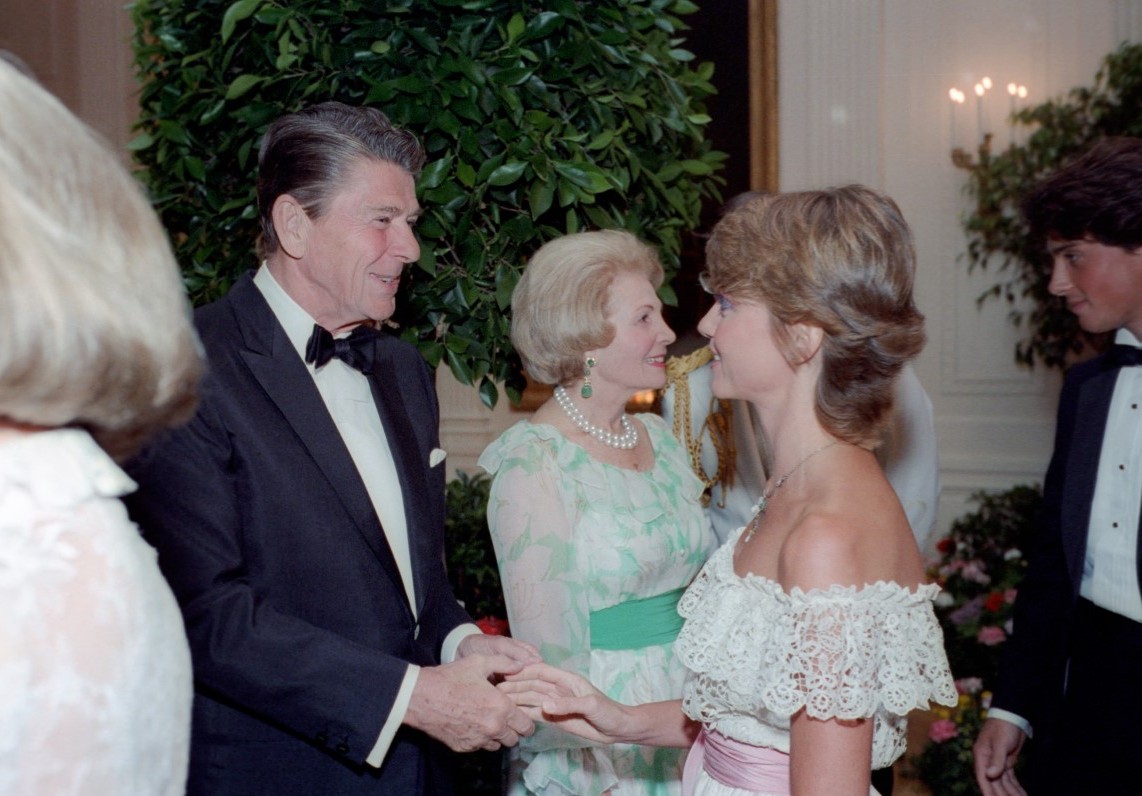 The death of Olivia Newton-John is a sad loss to so many of that generation. It comes as somewhat of a jolt, a shock, even as she managed to reach the age of 73 after three decades of battling cancer. Her last couple of years were especially hard, and yet she still looked lovely and seemed as cheerfully happy as always. She lived an extraordinary life and saw it as a great grace that she survived cancer for so long.

The woman looked terrific into her 70s, with cancer. The cynic would chalk that up to plastic surgery or money to afford whatever she needed to maintain her youthful beauty. But I submit that there are some people, very few and very fortunate, who are simply blessed with looks always. Olivia Newton-John was one of them.

She was also blessed with a wonderful voice. She came from that 1970s era of extraordinary female vocalists who had a natural harmony and melody that you simply don’t hear anymore. Karen Carpenter was one of them. Olivia Newton-John was another. That voice first reached the widest audiences with her “I Honestly Love You” (1974) and “Have You Never Been Mellow” (1975) and made its mark with tunes like “Hopelessly Devoted to You,” “A Little More Love,” “Magic,” “Physical,” and more.

Among them, many guys reading this had wished it was to them rather than John Travolta (i.e., “Danny”) that Olivia (i.e., “Sandy”) had been singing “Hopelessly Devoted to You” when they first saw the iconic film Grease in 1978.

I was 12 years old, watching at the Pioneer Drive-In in Butler, Pennsylvania. My wife insists that I had a crush on Olivia Newton-John ever since. Didn’t every 12-year-old boy?

I would argue that the girl who most appealed to every boy watching that movie was that “Hopelessly Devoted” version of Olivia-Sandy, rather than the Olivia-Sandy in the closing scene prancing to “You’re the One That I Want.” Not that any red-blooded male minded the black pants, of course. But it was the pretty innocence of the earlier Olivia-Sandy that I think most guys fell for — the one who at the start of the movie sweetly crooned “Summer Nights” in the ’50s poodle skirt.

That earlier “Sandy” in Grease struck the viewer as the more authentic Olivia. With typical lightheartedness, Olivia Newton-John herself recalled the contrast in an August 2019 interview:

It was so much fun. I was playing Sandy for quite a while on set and I got to know her as this sweet little girl in a poodle skirt. But then when I got to try on that bad girl look for shooting, I actually didn’t know what to expect. I just had my hair and makeup done.

I walked on set wearing the costume while John [Travolta] was in the middle of filming a song. The reaction I got was so unexpected [laughs]. First of all, [the cast] didn’t know who I was. And then I got all of this attention from the guys. I just thought, “Oh my goodness! Is this what it takes?” [laughs]. It was an ah-ha moment, a humorous one. I was playing a character, but it was a lot of fun for me.

To that end, I’ve met far more people (especially women) disappointed with how “Sandy” seemed to sell out at the end of the movie. My wife hates it. Numerous women I’ve talked to can’t bring themselves to fully embrace the movie because of how it closes. I understand. I’ve also heard defenders say that “Sandy” might have dressed the part at the end, but that doesn’t mean she changed for the worse. After all, her words of warning to “Danny” in that song are this: “You better understand, to my heart I must be true.”

Of course, the tough greaser Danny fell for the innocent Sandy, too. He had changed for her.

And as for Travolta-Danny, Olivia-Sandy was far superior to the New York–obnoxious character that Travolta was paired up with in “Saturday Night Fever.” The latter was insufferable. You wanted to jump out of your theater seat and toss a brick at the screen when she started spraying her insults. She was the anti-Olivia. The “Sandy” character in Grease was perfect because Olivia Newton-John was perfect.

As was her singing voice. If you’ve ever seen Olivia Newton-John in concert or on YouTube, you were struck at the near-flawlessness of her voice in live performances. She didn’t need to lip sync. The camera zoomed in close to her face and captured her pulling off her song almost perfectly (click here and here).

Grease set the stage for Olivia Newton-John to become a huge star in the 1980s. Those who came of age in that great decade, including this magazine, watched her soar to major success. Her song “Physical” was No. 1 on Billboard for an astonishing 10 weeks in 1981.

Matching her ’80s persona, Olivia Newton-John, like this magazine and many of you reading it still today, was very much part of the Reagan era. She knew the Reagans. On June 30, 1981, she attended a state dinner at the Reagan White House for the Australian prime minister. On Feb. 27, 1983, she attended a Reagan dinner for Queen Elizabeth II in Los Angeles. The invite list included a who’s who of prominent Hollywood conservatives and Republicans: Ginger Rogers, Sean Connery, Tom Selleck, Dean Martin, and Johnny Carson, to name a few.

In fact, Olivia was the top choice by Reagan organizers to be the female entertainer for ABC’s televised coverage of the 1985 inaugural gala. In charge of that list were Frank Sinatra and the Beverly Hills–based Mickey Rudin. In a November 1984 memo considering various female singers, she was literally at the top of the list among 11 potential big-name choices (including Lena Horne, Ella Fitzgerald, and Liza Minnelli).

She was also friendly with both President George H. W. Bush and his wife Barbara Bush, who she first met when Bush was vice president. In a funny moment, she later humbly recalled to Barbara Bush her surprise that the vice president of the United States first remembered meeting her, to which Barbara sarcastically quipped, “It’s because you’re so ugly, dear.”

They became friends, exchanging letters and other correspondence while Bush was president and after. They even spent time together in the late 1990s when the Bushes visited her in Melbourne, Australia. She loved the Bushes. (She also knew George W. Bush, though probably not as closely.) On Dec. 1, 2018, Newton-John issued a statement on the senior Bush at his death, calling him “a special man” and remembering him as “always so delightful and kind to my family.”

Politically, I’m sure that Olivia Newton-John identified with the Republicans, certainly in that Reagan–Bush era, though she wisely kept her political views private. Wikipedia and some other sources highlight her apparent support of some left-leaning environmental causes and some “gay” rights issues. The environment was always a key concern for her, including in some of her correspondence with President Bush.

We can say this much: Befitting her classy personality, Olivia Newton-John discreetly stayed out of politics and avoided stupid political statements. That even more likely meant she was not a liberal. My Hollywood conservative friends often say that if you don’t know a certain Hollywood figure’s politics, that likely means he or she is a conservative. The liberals, by contrast, can’t shut up; they can’t help themselves. The conservatives can and often have no other choice in Hollywood given the liberals’ nastiness.

One other observation about her in the Reagan era: The ’80s were the peak of Olivia Newton-John’s success. Of course, that was four decades ago. She enjoyed her time at the top while still never succumbing to the trashiness of other female ’80s icons, like Madonna, who became progressively more outrageous and downright skanky, with not a shred of the “Borderline”/“Lucky Star” innocence left. Olivia Newton-John’s innocence remained with her, as did her cheerful contentedness, even long after her initial cancer diagnosis in 1992. She had another good 30 years of life, always representing herself so well.

Sure, I’ve had my share of disappointment and flops — but that’s all part of it.

You just keep going. That’s really what success is about. You keep on going despite the setbacks and flops. And I enjoyed the ride. The whole thing was great.

The whole thing was great indeed. Quite a ride.

And now, she has left us to sing with the angels. Let us remain devoted (not hopelessly) to Olivia Newton-John’s music and memory.