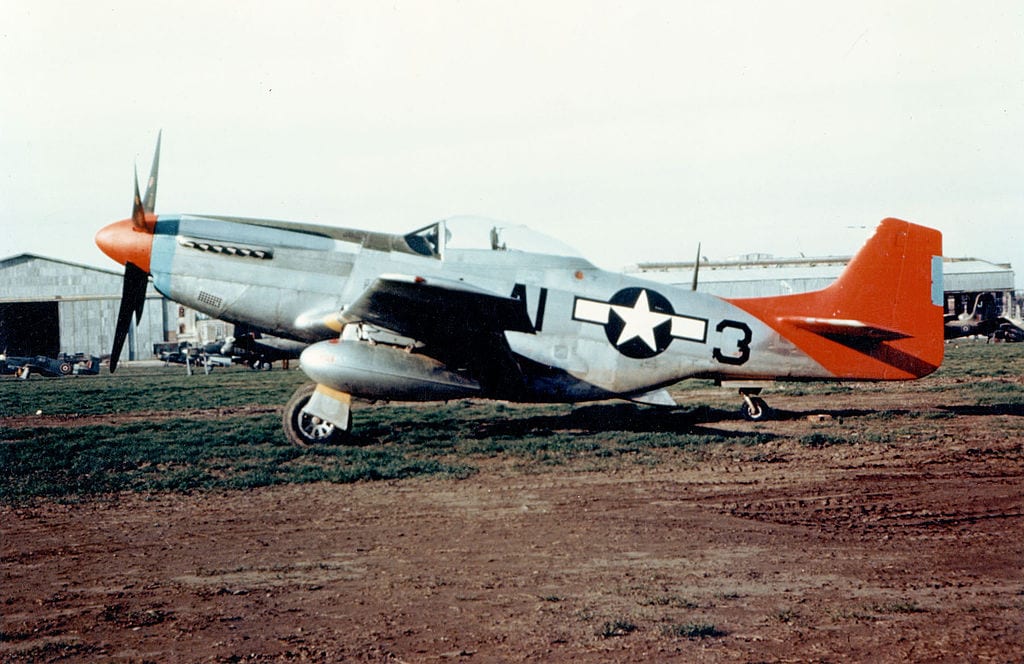 On one level, it’s somewhat reasonable to have a bit of sympathy for Washington Redskins owner Dan Snyder. After years of admirably determined resistance to idiotic demands from various leftist pressure groups, Snyder finally relented and announced he was retiring the franchise’s popular and iconic mascot, including its distinctive helmet logo, which was designed by a proud American Indian artist, and beginning a search for something else.

The Red Tails didn’t back down like Daniel Snyder did. And they faced far higher stakes than he did.

Snyder’s decision was rational. One might even say it was made under duress. He had expressed a preference to move his team from its current location in Maryland back into Washington, D.C., but that city’s circus-clown mayor Muriel Bowser took time away from painting “Black Lives Matter” murals on city streets to call the team’s name “offensive” and to declare that a move back into a new stadium in the capital city was unlikely if the mascot remained.

Then the team’s corporate sponsors hit the road, and that was all she wrote.

Now the Redskins say they’re considering a host of names. Entertainingly enough, enterprising trolls have snapped up the copyrights to all the good ones. Snyder is almost assuredly going to have to fork over massive amounts of money to buy his way out of the Redskins, a team name that just a few years ago received overwhelmingly positive reaction from Native Americans. It’s mostly paleskin leftists who object to the name, much as no actual Irish people in any numbers are irritated by Notre Dame’s nickname, no Cajuns are angry about the University of Louisiana at Lafayette’s Ragin’ Cajun nickname, and nobody in Minnesota has a problem with their team being called the Vikings.

Hogs, Warriors, and Red Wolves are three of the possible names. Hogs at least has some cachet in that it’s an old nickname for those famous 1980s and 1990s Joe Gibbs offensive lines and their crushing, physical style of play. The others are hideously boring.

Red Tails, however, is different. Red Tails is a great team name.

And Snyder has absolutely no business whatsoever naming that team the Red Tails.

Everybody here knows what Red Tails signifies, right? In the European theater of World War II, the Red Tails were the famous squadron of Tuskegee Airmen, the black pilots from that historic black university who served so brilliantly in the skies over Germany. They were known as some of the best fighter escorts for the massive bomber convoys laying waste to German infrastructure in the back half of that war. Particularly, the distinctive red paint on the tails of their aircraft, and especially the P-51 Mustang they flew at the end of the war, made them an underappreciated, but nonetheless truly exemplary, bit of military Americana.

The Tuskegee airmen dealt with a whole lot more discrimination and adversity than any of the snowflakes spending time whining about names of sports teams could even dream of. They’d be absolutely insulted, one might imagine, at the NFL’s sudden deficit of patriotism in the face of the Marxist Black Lives Matter craze. Perhaps as a result they’d less than enthusiastic about having their experience memorialized by a team in that league.

But other than that, Red Tails is a terrific tribute and a cool name.

Red Tails would be a really good name for a team in Alabama, for one thing. The Red Tails came out of Tuskegee, which is east of Montgomery. Maybe if the NFL were to expand to Birmingham, Red Tails could be apropos for such a franchise. But Red Tails has nothing to do with Washington. Nobody in Washington did much of anything to create the Tuskegee Airmen. It’s not just a cultural appropriation for an NFL franchise owned by a white guy to call that team the Red Tails, it’s a geographical appropriation.

But there’s a more substantial reason why Red Tails would be an abomination of a name for this team.

There was a fundamental reason the Red Tails were so well-regarded by their colleagues in the Army Air Corps at a time when black people doing any jobs were unlikely to receive their due. Namely, when the Red Tails were given a mission to escort flights of bombers over Germany, they didn’t allow themselves to get distracted by insubstantial adversity.

The Luftwaffe by that point in the conflict was low on aircraft and even lower on pilots. They didn’t have the numbers to mount full-scale attacks on those bomber flights. They certainly couldn’t mass fighters to turn the skies into the scenes of massive air battles. Thus their primary tactic was to hit and run, to harass the Americans and try to draw our fighters away from the bomber convoys. When that worked, our fighters left our bombers unprotected and gave other German pilots a better chance to shoot more of them down.

But the Red Tails earned notoriety for better performance on that score. Unlike other American fighter pilots who would take the bait and run off to do battle with the Germans, they stayed with the bombers all the way to the target.

The buzzing of the enemy never distracted the Tuskegee Airmen. They stayed on mission.

And the results were demonstrable. The average number of bombers lost during escorts in the European theater was 46. When the Tuskegee Airmen were providing the escorts, they only lost an average of 27. On March 24, 1945, the Red Tails escorted a flight of bombers on an 1,800-mile mission over Berlin and didn’t lose a single one.

They didn’t back down like Daniel Snyder did. And they faced far higher stakes than he did.

If you really need a new name for your team, here’s one that is far more appropriate. It personifies most of today’s Washington. It celebrates those protesters who manage to injure members of the Secret Service. This team name memorializes the folks who thought burning a church was a good idea. It lionizes those who threaten or destroy countless historical landmarks. It also celebrates our political class, which has ruined practically everything it touches. And it personifies today’s NFL, which has done an about-face from serving as one of the most positive cultural institutions America has to offer to nothing more than one more corporate lackey to the anti-American Left.

Call your team The Scum of the Earth, Mr. Snyder. Say it a few times. You’ll find it quite catchy.