Joe Biden campaigned on the promise of appointing to the Supreme Court a black woman who subscribes to his liberal interpretation of the Constitution. In Ketanji Brown Jackson, he has fulfilled this campaign promise. She has long been a darling of abortion groups. NARAL Pro-Choice America, for whom she once wrote a friend-of-the-court brief, endorsed her previous appointment to the U.S. Court of Appeals for the District of Columbia Circuit.

“We applaud the Senate’s confirmation of Judge Ketanji Brown Jackson,” the group said last year. “Her confirmation to the D.C. Circuit brings us one step closer to a judiciary that better represents the diversity of our nation and one that will uphold our most fundamental rights and freedoms — including reproductive freedom.”

Biden has long said that his ideal judge would uphold “unenumerated rights” in the Constitution. Chief among those invented rights, of course, is abortion. Biden expects justices to serve as liberal activists on the bench, ruling according to his liberal preferences. He famously opposed Robert Bork on blatantly political grounds — that the highly qualified judge was simply not committed to adjusting his jurisprudence to “progress” and the “rights of individuals in a changing world.”

Biden calls this a “living” understanding of the Constitution, but in practice, that activist jurisprudence treats the Constitution as dead — just a blank piece of paper on which judges can write whatever they want. Out of this mindset has come decades of judicial despotism, with a handful of judges thwarting the people’s right to shape law according to traditional conceptions of religious freedom and Judeo-Christian morality.

Biden expects justices to serve as liberal activists on the bench, ruling according to his liberal preferences.

Biden has clearly selected Jackson to strengthen that activist bloc on the court. A former clerk to Stephen Breyer, she will at the very least uphold his liberal record but in all likelihood will surpass it. At 51, she could serve on the court for two or more decades to come. Her background in “criminal defense” also made her appealing to Biden. He was looking for a nominee who could satisfy progressives aligned with both Planned Parenthood and Black Lives Matter.

At the same time, Biden didn’t want his nominee to be too radioactive. In a tight Senate, he needs Joe Manchin and a few Republicans to support Jackson. She may fit the bill as a stealth candidate for Biden’s purposes. In his introduction of her last Friday, Biden emphasized both her work as a public defender and her familial connections to law enforcement. He also talked about the “bipartisan” support she has received over the years. She is “relatable,” purred pundits on CNN.

It turns out that former Republican Congressman Paul Ryan is related to her by marriage. He issued a supportive, if quizzical, statement about her nomination: “Our politics may differ, but my praise for Ketanji’s intellect, for her character, and for her integrity, is unequivocal.” Her “politics”? That Ryan even phrases it in those terms tells you what these nominations have become: the elevation of ideologues, not judges, to the court.

Another curious part of her biography, which could help moderates portray her as a less-than-radical nominee, is that she once served as an adviser to a conservative Baptist school in Maryland. Asked about that work last year, she said that she wasn’t aware of the school’s traditional Christian mission statement. How that association happened isn’t clear. But LGBTQ activists at the Human Rights Campaign aren’t holding it against her. They have endorsed her and put out a statement saying that after “a careful review of her record, it is clear that Jackson’s demonstrated fidelity to the principles of our Constitution instills confidence that she will continue Justice Breyer’s legacy as a champion of equality.” 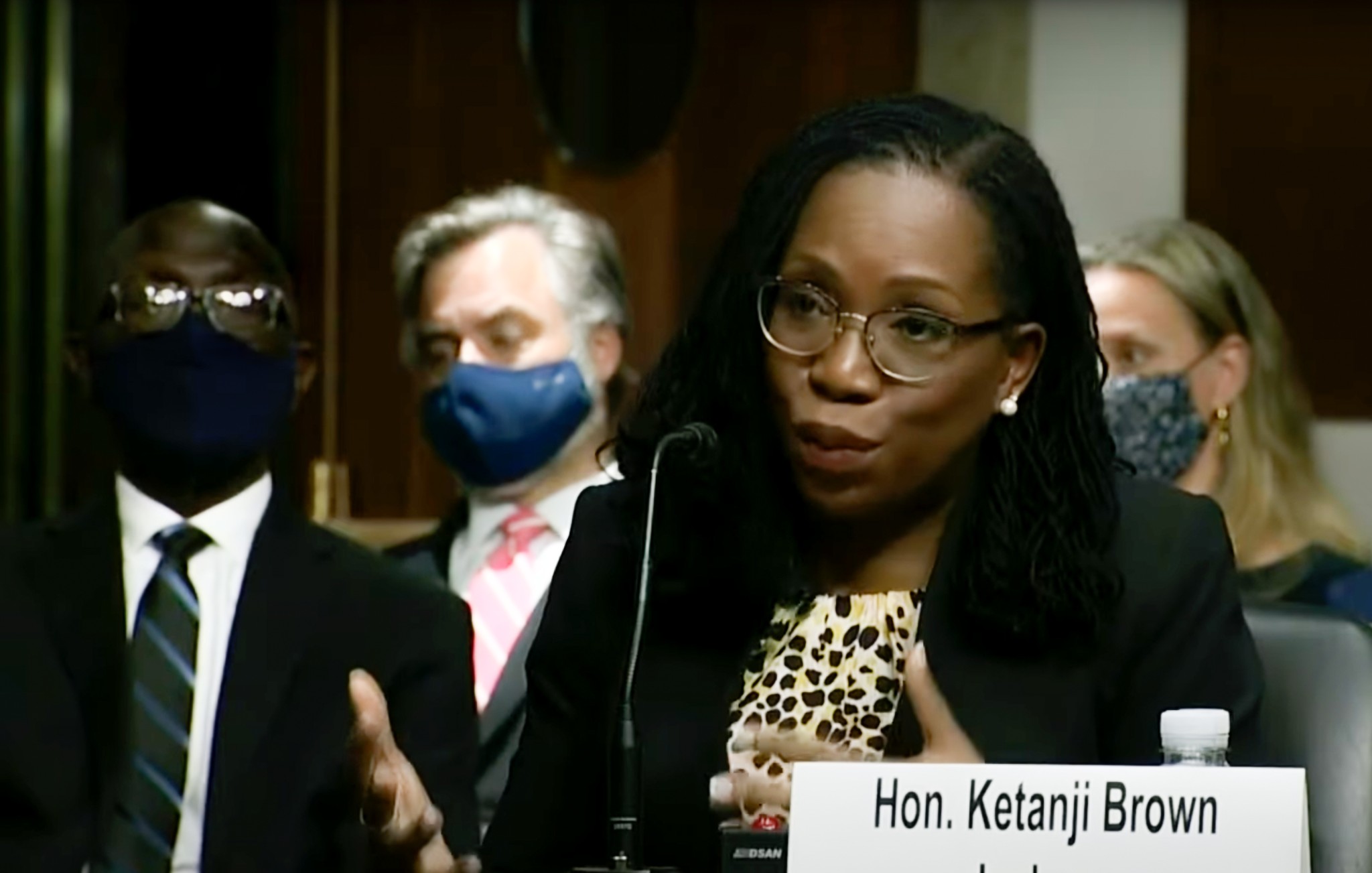 Liberal activists are also cheering her previous rulings against the Trump administration. Jackson, for example, blocked Trump’s Department of Health and Human Services from cutting off grants to libertine “teen pregnancy prevention programs.”

Last year, the liberal organization Alliance for Justice gave her a clean bill of health, noting that a constellation of left-wing groups supported her:

Judge Jackson’s nomination and commitment to “equal justice” under the law were endorsed by the American Federation of Labor and Congress of Industrial Organizations (AFL-CIO), the country’s largest federation of unions, and by the American Federation of State, County and Municipal Employees (AFSCME), the largest trade union of public employees in the country. Several civil and human rights groups, including National Council of Jewish Women; National Education Association; National Women’s Law Center; People For the American Way; and The Leadership Conference on Civil and Human Rights also wrote letters of support.

Like Breyer, she appears to combine a low-key personality with a solid commitment to liberal jurisprudence. She won’t disappoint Biden on any of the issues crucial to him. Unlike the Republicans, who forswear litmus tests and then end up with weak justices like John Roberts, the Democrats vet their nominees ruthlessly. Nothing is more important to them than the preservation of Roe v. Wade and the court’s politicized rulings in favor of all things LGBTQ. As evident from the praise of Planned Parenthood and the Human Rights Campaign for her nomination, she is sure to advance that revolution.