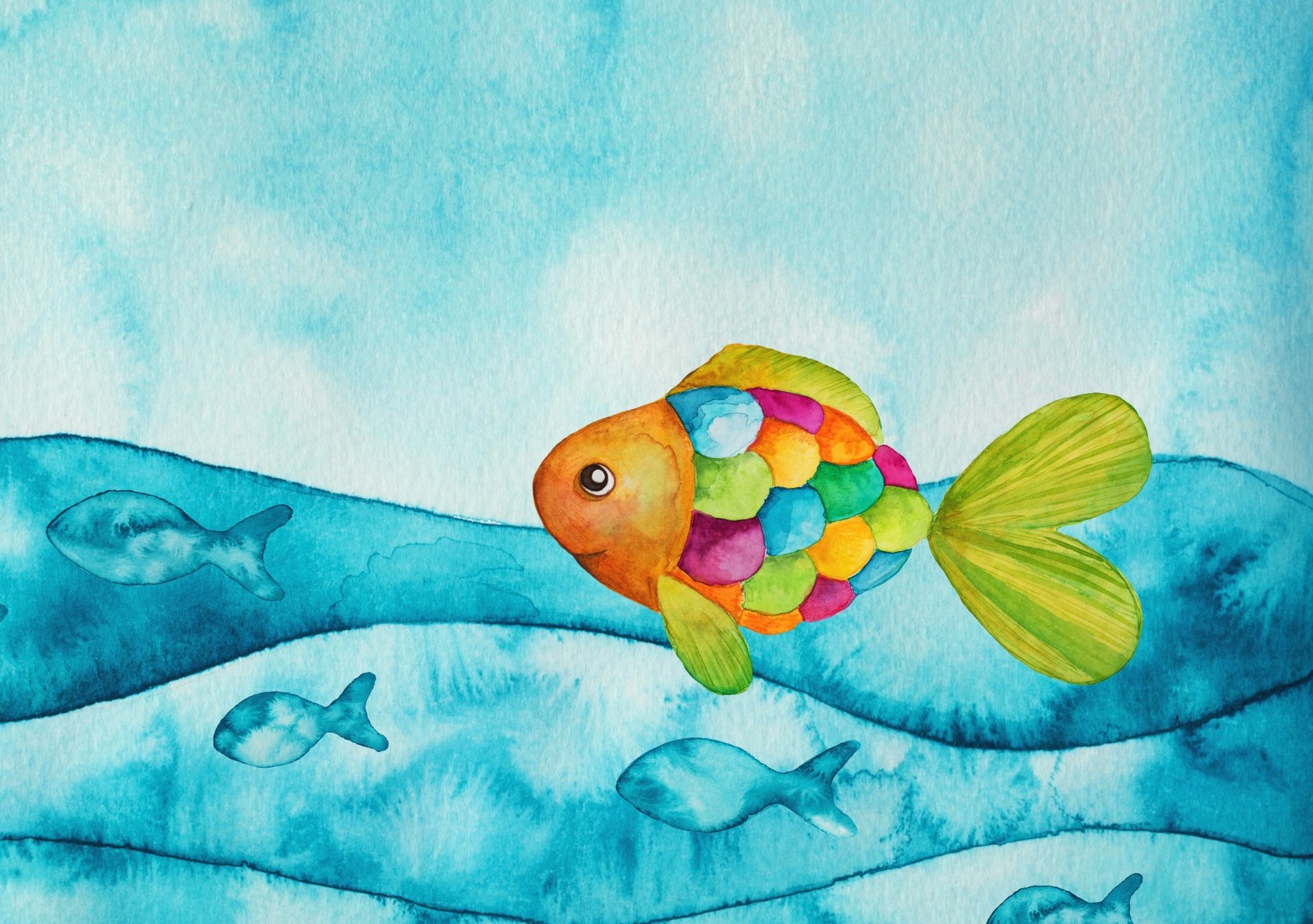 Perhaps the most risible, widely acclaimed children’s book in the history of children’s books is The Rainbow Fish. This book, featuring a beautiful fish with shiny scales on the cover, made it into home libraries of children everywhere. It tells the story of a fish who is special because his scales are shiny and brightly colored. Every other boring, no-talent, plainly scaled fish envies the lovely and gifted Rainbow Fish and harasses him. The solution? The Rainbow Fish gives away all that made him special in order to earn their friendship and now these little commie crappies each have one scale but remain ugly, envious redistributionists.

The result? Equity. Everyone felt better because no one was great. A bunch of mediocre fishes swim around with pink hair or a nose ring and a big chip on their no-talent shoulders.

America, ideas have consequences, and the fruit of the nasty seed of this malignant book has blossomed into full societal cancer.

If it sounds like I hate this book, it’s because I do. It came out in 1999 and a family member who shall remain nameless bought it for my eldest. Oh, so pretty, I thought. And then I read it. There was no way on God’s green earth that I was going to read this tripe to my children. Instead, I made up a story and told them about how, if they have talents and special gifts, it is their job to use and develop them. It is also important to encourage their friends to develop their gifts and be the best people they can be. After looking at the pretty pictures, I tore up the book lest some other kid stumble across the socialist propaganda and believe it. (READ MORE: Melissa Mackenzie’s Children’s Book Recommendations)

Too many parents read the book to their kids. Too many children learned the lesson. Those children currently have purple hair, skills creating Molotov cocktails, hate the police, and stop traffic for fun. They start places called C.H.O.P. and share bottles of Kool-Aid. They’re a net drag on society and they blot out what talents they have with hatred and marijuana.

This is the age of the Rainbow Fish and if it feels like a cursed dystopia, that’s because it is.

Rainbow Fish teachers seek to eliminate standards, reduce merit-based programs like gifted and talented classes, toss out entrance exams, and stop grading students. It started with getting rid of red pens. It’s ending with wasting the talents of high-potential students.

It’s one thing when there’s a school of crappies here and there, but now, government, education, science, technology, media, and everywhere else are overrun by this invasive species. The crappies are crowding out the productive, talented fish. The gifted fish must give away their gifts and pretend to be average in order to be accepted.

Conformity is the highest value. Ironically, all these purple- and pink-haired, tattooed weirdos claim to crave individuality while wearing black from head to toe and showing up at the protest du jour. Whether it be BLM, Antifa, an environmental group, or abortion, the same people show up and tear things down. They hold the exact same worldviews. They find words offensive and use violence to solve their problems. When Andy Ngo shares their images and backgrounds on Twitter, an alarming number of them interact with children for their jobs.

When the crappies find and take on their identifying scale, this gives them power. Without merit or accomplishment, these self-seeking fish demand that the world conform to their distorted view. Because they’ve taken on a label and wear it proudly, they believe it entitles them to special consideration. In addition, they believe they are victimized because they have taken on these labels and are therefore more important than their peers. They’ve stripped the Rainbow Fishes and negated their beauty. They’ve diminished their hard work. They hate merit-based anything for fear it reveals their hidden plainness.

The fat girl on the cover of Sports Illustrated is not more beautiful than Christie Brinkley in her prime (or heck, even at 60). She isn’t healthy. She isn’t alluring.

The anthropology major of ambiguous gender isn’t smarter than the mechanical engineer or the astrophysicist.

Jill Biden’s Ed.D. in education does not make her as accomplished or useful as the medical doctor doing neurosurgery to save someone from a rapidly multiplying glioblastoma. (Dr. Ben Carson has done that, by the way. He’s a real doctor who did real neurosurgery on tiny pediatric patients which requires real talent.)

The world would be a better place without The Rainbow Fish. The book shares a toxic message that is the foundation of all Critical Theory curricula. Grievances are stoked by mobs of the plain people who bully those who are more gifted than they. It’s evil.

I’m not for book banning. However, after teaching your kids the truth and how to deal with envious bullies, tear up the book and throw it out. Save the next generation from this mess and let the Rainbow Fish generation fade into ignominy — their worst fear made real.