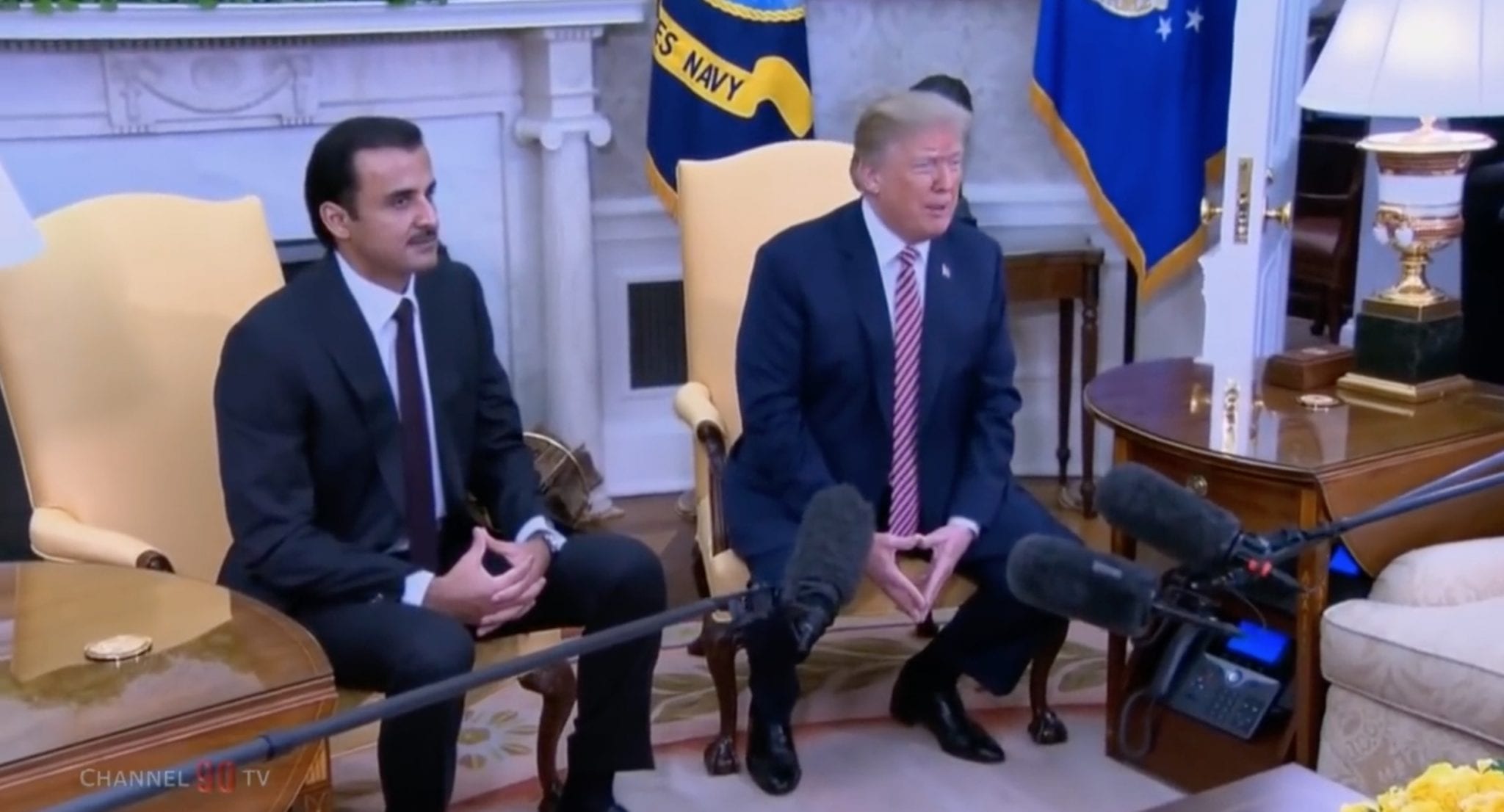 Qatar’s stand off with Saudi Arabia has engulfed the Middle East, and the ensuing propaganda war has now spread into the United States. Qatar takes no prisoners, and has engaged in damaging character assassination tactics against its foes, which include the United States, Israel, American Jews, Saudi Crown Prince Mohammed bin Salman, and anyone critical of Doha, in no particular order. Its use of reputational politics has done nothing to resolve the Gulf Crisis, but is increasingly presenting a threat to Americans who have been dragged into this dispute.

Tuesday’s meeting with Qatar’s Emir Tamim bin Hamid Al-Thani could have been a good opportunity for President Trump to express concerns about a variety of political matters: Qatar’s support for Iran, its funding of Hamas and the Muslim Brotherhood, and the Al Jazeera spying operation on the American Jewish community. Senator Ted Cruz (R-TX), and approximately 50 lawmakers from the House signed a letter to the Department of Justice asking for an investigation into Al Jazeera and possible designation of the state-run network under the Foreign Agents Registration Act (FARA).

Al Jazeera’s history of hosting Muslim Brotherhood speakers and spouting anti-American, anti-Israeli, and anti-Semitic conspiracies is well documented by organizations such as MEMRI. Qatar is a small country and its military options against its real and imaginary adversaries are limited. However, with no shortage of funding for information warfare, Doha has used reputational politics to support smear campaigns against its opponents and to infiltrate public discourse in the West with persistent conspiracy theories. At home, Qatar is still known for widespread publication of anti-Semitic literature, despite the lip service to inviting Israelis on Al Jazeera, or hosting Israeli chess players. With respect to its regional rivals, Qatar has utilized both fake news Arab-language publications in Europe and mainstream U.S. publications such as the New York Timesand Wall Street Journalto spread anonymously sourced stories about Saudi Arabia and others.

A few well known and retracted episodes, which nevertheless persist in the public imagination, include the stories of how Mohammed bin Salman allegedly bought a Leonardo da Vinci painting, and an expensive chateau, and how allegedly someone (the identity of that person changes with every iteration of the story) died in custody under torture during the corruption probe. Such baseless rumors are damaging enough in terms of misinforming the public in the United States; what is much worse, however, is when Qatar directs its information warfare apparatus to operate in the United States. The scope of such activities is quite broad.

Some of it mirrors similar and relatively innocuous activities with limited reach organized by its rivals — public lectures and other events at universities and think tanks aimed at promoting mass understanding of regional issues from Doha’s perspective. However, Qatar’s funding of the sprawling Al Jazeera apparatus has been far more effective in reaching wider audiences and indoctrinating the viewers in the Arab world as to the defamatory perception of the West, including the United States. Because Al Jazeera has been willing to criticize the leaders of the other Gulf States (never Qatar herself, of course) and Egypt, it has gained mass appeal, and its revolutionary message has reached the same type of people who gravitate to Muslim Brotherhood and other Islamist and revolutionary organizations. Spreading anti-American bigotry throughout the Arab world, however, is just the tip of the iceberg. Qatar has managed to gain legitimacy in the West by cleaning up its image, finding effective arguments to cast doubt on the blockade by some of its neighbors, and casting itself as an underdog against much bigger and more powerful states.

However, a major part of its campaign included character assassination against its critics, on par with the positive propaganda to enhance its own image. For instance, a Republican operative close to President Trump, Elliott Broidy, is now suing the Qatari government for allegedly hacking his personal information and leaking his email exchange with the UAE ambassador Yousef Al Otaiba online. The leak of this exchange whether fabricated or fully accurate has led to additional legal problems for Broidy, and assorted other political functionaries connected to the events surrounding UAE’s facilitation of the Seychelles meeting with the Russians, Jared Kushner’s alleged involvement in the imposition of the blockade against Qatar, the firing of the former Secretary of State Rex Tillerson, and much else.

Broidy now claims that he has forensic evidence connecting the Qatari government to the emails; however, a judge recently ruled against Broidy’s motion that would prevent Qatar’s lawyers from disseminating hacked emails, opining that the evidence proving the link is insufficient. What’s far more interesting than the merits of the political underpinnings in this story is the potential new dimension in information warfare, undertaken by a state actor practically in the open, and that while perhaps not rising to the level of election meddling by Russia, still presents a serious potential threat to U.S. democracy.

If Qatar is indeed behind the hack (and given the stakes involved, that is as plausible a theory is any), this new front in informational warfare means any political operative, any member of the administration, any consultant, or anyone involved in sensitive political exchanges is now an open and legitimate target for hacking and smear campaigns. This undermines the President and anyone connected to him, as well as the entire foreign policy of the United States, not to mention the right to privacy of any U.S. citizen.

A threat of no one being safe from such exposure is significant enough to warrant a serious investigation into these allegations regardless of the judgment, ethics, or political values of Elliott Broidy himself. Journalists, too, can get caught up in similar circumstances. Jay Solomon’s experience is a reminder how imperfect judgment coupled with editorial paralysis creates easy vulnerabilities for foreign government-hired hackers to make their targets, rather than the political developments investigated by the journalists, into stories.

Yet occasional hacks into top level figures may only be a start in a ruthless informational warfare campaigns. The direction and scope of hacks and cyberattacks are limited only by imagination. Lobbyists, advocates, lawyers, and anyone else connected with Doha’s adversaries or critics may be considered fair game, with potentially disastrous results for many of their clients that have absolutely nothing to do with the Gulf Crisis or even politics. For the time being, Doha may exercise restraint in leaking only directly relevant information, narrowly tailored to the circumstances which touch directly upon its interests. However, as the war of words heats up, Qatar’s tactics are likely to become more ruthless, and any information, even if it has the potential to ruin the lives of hundreds of innocent bystanders, may be utilized to maximize damage.

There is, however, yet another potential dimension to the use of hacking towards character assassination — and that is, preempting future threats to Qatar. Recently, the author, who in several articles had criticized Qatar’s disingenuous policy of recruiting American Jews and using them as pawns in its propaganda war, dividing the community (while also spying on them), received information from several sources about an alleged hacker hit list backed by Qatar that targeted an assortment of critics who publicly excoriated Doha. The existence of such a policy, however informal and attenuated, potentially speaks to a new strategy — taking out potential influencers well before they have reached their career zenith.

Potential targets would be relatively low level and unknown, but active and vocal in speaking out against Doha’s interests in public. They would also be consistent in their views, and thus, not easily swayed by disinformation, or positive incentives. Many of them would not necessarily even know that they are hacked; intimidation may only be a part of this strategy. Far more damaging is the use of purloined information in the future when such would-be influencers are on the rise; the governments may then simply give the order to leak the damaging information be they emails taken out of context, personally embarrassing “kompromats,” or partially or fully fabricated information with just enough references connected to the target’s life to make them credible. Much of it is a combination of Cold War methodology which used both the gathering of legitimately incriminating information, and doctored photos to ruin reputations, and take out threats or avenge ideological traitors. By that point, it will be too late to investigate past hacks, not that it is easy or cheap to trace back each such incident — if it’s even noticed. Thus, the government can with impunity ruin lives and undermine potential critics, shaping the very landscape of future U.S. foreign policy and politics through cyberwarfare.

In its meetings with  Emir Tamim and any other future diplomatic engagements, President Trump and other officials should focus at least as much on Qatar’s potential threat to U.S. internal matters and democracy (which, of course, will be vehemently denied) as on the other choices Qatar should contemplate if it is to remain a U.S. ally. As for the critics of Qatar, who wish to continue operating in security, awareness of the threat and inoculation of the public to potentially damaging interventionism from foreign governments are the first steps to effective self-defense. There is no shortage of information about effectively changing one’s mindset and habits in order to create a more secure physical and cyber involvement, from password management to secure methods of communications, to awareness of social media engineering used by cyberwarriors to gather information. But understanding the danger is critical. Qatar’s meddling in U.S. politics should be as much a part of public discussion as Russia’s meddling in the U.S. elections. Any country that is willing to violate our laws to further its agenda, is acting as an adversary, not a friend, and should bear consequence for what ultimately amounts to an act of war.