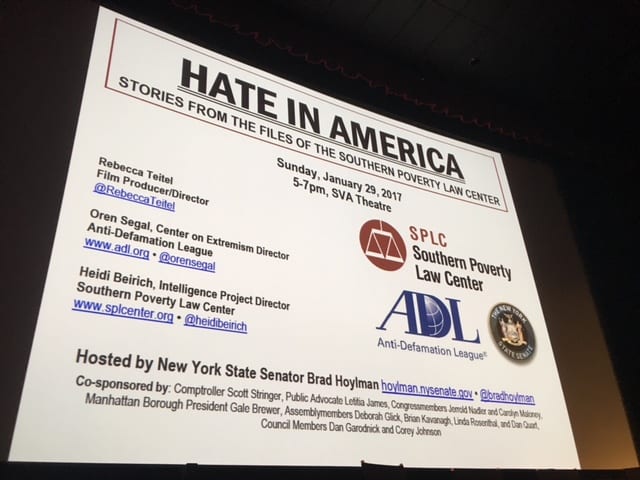 A cabal of progressive operatives met Sunday night in New York City for a public strategy session that was promoted by the hashtag #DeleteAltRight.

New York State Senator Brad Hoylman hosted the conspiratorial gathering at the SVA Theatre in Chelsea, using the tagline “What You Need To Know About the Alt-Right and White Nationalism.” The event was convened to promote a new film called “Hate in America” by the Southern Poverty Law Center. But the whole thing was about how to target White House chief strategist Steve Bannon and Breitbart, the news site he chaired before moving to the Donald Trump campaign.

Matthew Tyrmand, an advisory board member at my organization the America First Project, provided me with photos and audio from inside the gathering. Tyrmand is a Bannon supporter, a Breitbart contributor, and an avowed enemy of anti-Semitism in all of its forms. 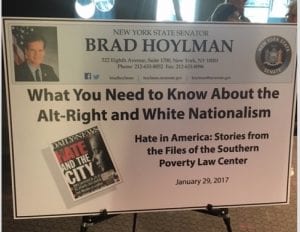 New York City public advocate Tish James was introduced as someone who will “lead the resistance to Donald Trump.” New York is a so-called sanctuary city for illegal immigrants, with mayor Bill de Blasio vowing to defy Trump’s immigration orders.

James said that the ”prejudice and xenophobia” of Trump’s campaign goes all the way to the top. ”That ignorance and hate is reverberating across the country.”

One of the panelists made clear that Steve Bannon, the chief White House strategist, will be targeted above anyone else by the forces of the progressive Left.

As a Breitbart News 2016 campaign reporter who worked under Bannon, I can say with the utmost certainty that the man is no racist. But that’s not stopping the establishment forces on both sides of the aisle from trying to smear him by any means necessary. 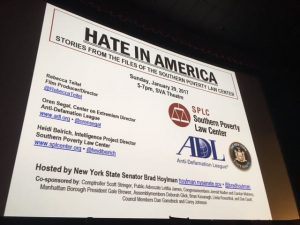 An attendee questioner at the event said that Bannon and Trump adviser Stephen Miller are “doing things that absolutely mirror the early stage of the Third Reich.”

“I would say Steve Bannon is probably the worst offender right now in the administration,” Beirich said. “The thing about Bannon is this: he intentionally stated that he wanted to create the website that he was running…as a platform for the Alt-Right. Those are his words. That’s what he wanted out of Breitbart dot com… he’s sanctifying white nationalism.”

“You’ll find headlines like ‘trannies,’ there’s actually a whole section on the site about black on white crime…it’s actually the thing that got Dylan Roof to commit the shooting in Charleston South Carolina….so when a top adviser to the president says I want to provide a platform for these kinds of ideas it’s scary.”

“I can go on and on and on about these headlines on Breitbart,” Beirich said, calling them “exactly the ideas this country has been trying to get rid of and supersede.”

“He’s absolutely not bashful about it. And he doesn’t seem to care,” Beirich said of Bannon.

“Even in their parents’ basement, behind their computer though, they feel like they have a massive” support system, another official panelist said, referring to so-called “un-affiliated” extremists.

This is the comic-strip fantasyland of hateful, paranoid delusion inhabited by the modern Left. Only a combination of classist isolation, willful dishonesty, and severe mental problems could convince these so-called intellectuals that any of this nonsense is actually happening. But the Left, chastened by their historic loss, want Bannon’s head at all costs.

Republicans need to rally behind Bannon as he plays a key role in the most productive opening period for any modern president. Will supporters of Paul Ryan come to Bannon’s defense, or just let the progressives go at him?