There is a laughable little blurb over at Political Wire today that’s titled: Blame the Media If Clinton Loses.

It’s laughable precisely because it isn’t intended to be funny, which it is. The left has long held sway over most media outlets in America but has spent so much energy in pretending that isn’t the case that they seem to believe their own lies now. Sure, if you mention this to anyone who even slightly leans Democrat you’ll hear “TALK RADIO!” and “FOX NEWS!” reflexively barked at you before you can even finish your sentence. They ignore that “the media” encompasses entertainment as well as news and, as such, is still heavily influential on people who don’t spend all day reading political blogs of one ideological persuasion or the other.

That this influence exists and is decidedly biased in favor of Democrats isn’t really debatable. Anyone denying it is either lying or remarkably ignorant.

Thanks to new media, some vulnerabilities in old media’s stranglehold on influence are showing up. One of the defining characteristics of this shift is the fact that the old guard lacks awareness that it’s happening. They may know on some subconscious level, but most news media types are in denial.

That denial could very well be the thing that tips undecided voters to Donald Trump.

The media has itself so twisted trying to make Hillary Clinton palatable to American voters that it is being even more ridiculous than usual. For example, this little bit of absurdity was floated by Team Clinton, then dutifully reported on by The Washington Post.

It is one thing to feign innocence when accused of bias but another entirely to pretend that the bias has suddenly reversed course.

Matt Lauer ended up asking Hillary Clinton some tough questions in the recent Commander-in-Chief Forum and that is being spun as “unfair”. In reality, it is just that Democrat presidential candidates aren’t used to anything but cheerleading from the media at this point in a presidential election cycle. One only has to look to the last election to see Candy Crowley’s incorrect fact-checking of Mitt Romney during a debate to see that the bias isn’t very subtle, it’s quite active and designed to sway the debate. Because of the overwhelming history of kid glove treatment for the Democrats, anything that’s actually fair will perversely be seen as unfair to people who are used to a certain standard of treatment. People used to flying on private jets probably feel like they’re slumming it in commercial first class, after all.

The tipping point for many may have come last weekend, when a bomb went off in New York City and Donald Trump had the audacity to call it…a bomb. It was the second bomb that day so it wouldn’t have been odd for the press to focus on all the, you know, bombing but that’s not what they got their teeth into at all. Instead, the entire rest of the weekend became all about trying to make Donald Trump look like an unhinged loon for calling a bomb a bomb, all because he didn’t wait for a call that said, “Yeah, it’s a bomb.” This was supposed to be indicative of a lack of leadership skill. While Trump was responding to the incident publicly, the President of the United States was telling jokes at a party and the woman who would be his successor was being prepped for a public showing by her handlers. By the time Hillary did make it in front of a camera, she was talking about “the bombings”.

Because there was a bomb.

Still, the press was insistent that calling it a bomb was an egregious mistake if one’s timing were not appropriate:

The Latest on NYC blast: Donald Trump declared “bomb went off” in Chelsea before officials released any details. https://t.co/T1Hbd5wRB2

My daughter goes to college in New York. Sure, she’s up in the Bronx but still goes into the City to see friends on the weekend so I was understandably nervous. The least of my worries that night was that Donald Trump got the correct information out too quickly. His assessment was far more helpful than Obama’s yuk-fest at the party. Maybe quickly note that Trump got a little ahead of himself but then move on and get to reporting on the attacks.

What old media fails to grasp at all is that the American public has grown weary of coy responses from leaders to what are obvious terror attacks. The irresponsible obsession of the Associated Press and their ilk last Saturday night did something that Donald Trump himself has yet to inspire me to do: defend him.

This could be the key to victory for him, and it might come because the media has become so hysterical with its bias now.

As I write this, riots are breaking out for the second night in Charlotte. One person is dead and reporters are being assaulted but the media is still calling them “protests”. 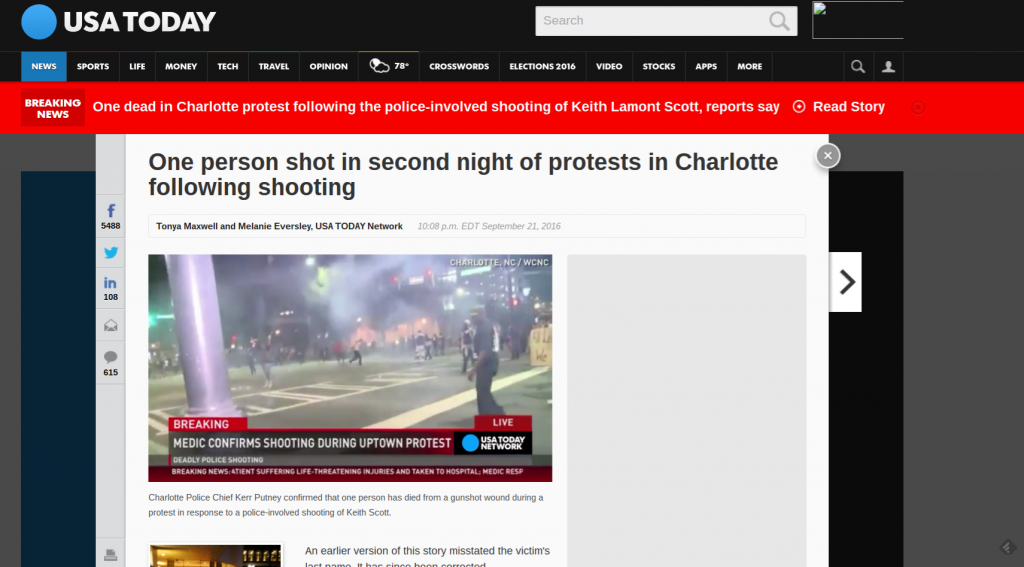 It’s not just USA Today, almost all major media outlets have yet to use the “r” word because they have to back up the false narrative. Who’s being irresponsible with word choices now?

The implication by the media regarding Trump’s statement last Saturday was that it could create unrest or panic.

So could hitting social media to side with the “protesters” without thinking:

Keith Lamont Scott. Terence Crutcher. Too many others. This has got to end. -H

In overreaching to give Hillary some frequently needed cover in order to facilitate her election, the mainstream media could very well tip the scales of undecided voters who are also exasperated with the threat of violence, whether it be from terrorists or “protesters”.