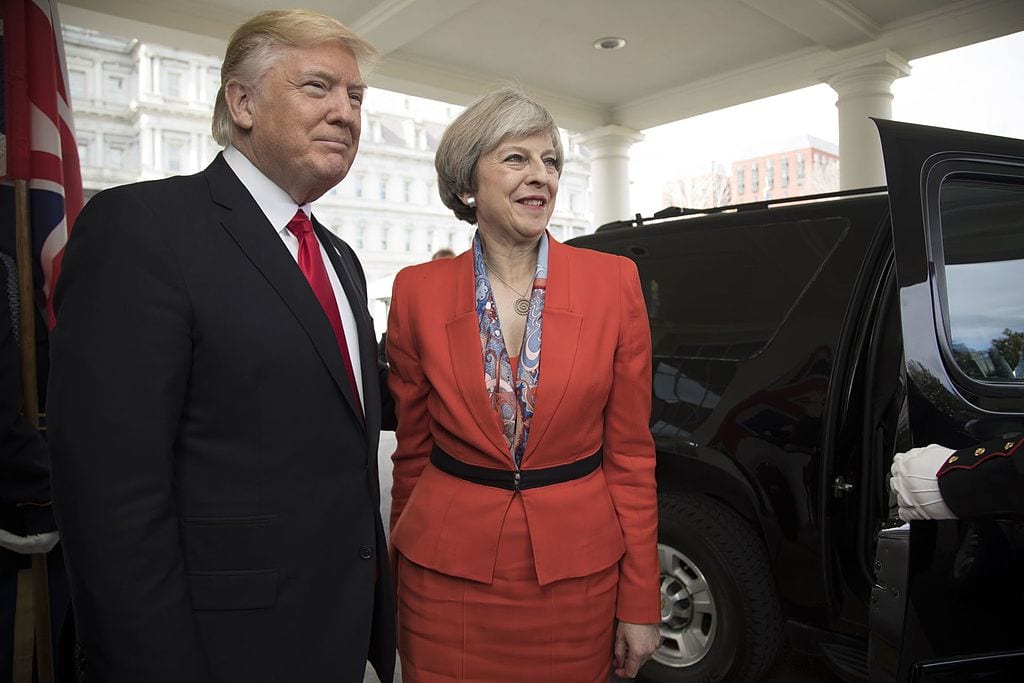 More Politics
Sign Up to receive Our Latest Updates!
Register
Hot Off
The Press
Asia
Why Didn’t South Korea’s President Meet With Nancy Pelosi?
by Francis P. Sempa
Choose Life
For Pro-Lifers, the Fight Didn’t End With Dobbs
by Shmuel Klatzkin
Special Report
America Turns the Tide: The Meaning of Guadalcanal
by Jack Park
Sunday Report
Will Religious Freedom Concerns Doom the Senate’s Gay Marriage Bill?
by George Neumayr
The Nation’s Pulse
To Dick Cheney and His Ilk: It’s Not About Trump
by Melissa Mackenzie

London in July, and more than an unusual summer heat wave awaits Britain’s prime minister Theresa May. The Brexit timetable is “hotting up” as ministers prepare to finalize the Government’s list of demands for Brussels, while restive Conservative MPs jostle for position to defenestrate their leader once the European Union deal is done. As tensions heighten, can President Trump offer respite to his beleaguered British counterpart?

The Cabinet meets this Friday at the premier’s country retreat at Chequers, where they will thrash out the Government’s white paper setting out the objectives for its future social, economic, and security relationship with Europe. Too little, too late, is the general consensus, as the formal Brexit separation takes place next March: while various measures and proposals have been drawn up and discussed desultorily, none have benefited from rigorous analysis, and now Brexiteers are fearful that the Cabinet will be presented with a fait accompli, take-it-or-leave-it Damoclean sword dangling over their heads.

Rumors circulate, for instance, that Mrs. May will propose abiding by European single market rules for goods, leaving the corollary of free movement of labor for the UK-EU negotiating table — ostensibly on the grounds that, as the United Kingdom currently abides by these regulations, this trade component can be quickly agreed by the two parties. Yet her critics argue that this concession empowers the EU to continue dictating terms, frustrating British attempts to innovate and compete for international trade agreements. Brussels mandarins, who habitually voice their disdain for Britain’s “independence” initiative, have no incentive to cooperate and encourage discontent on the Continent. They regularly back-foot Mrs. May and her Brexit ministers.

“Nothing durable can be accomplished without the impulse of general concurrence,” wrote Germaine de Staël, during those unfortunate “eras in history when the course of national feeling is dependent on a single man.” Woe to Britain that its fate rests with Theresa May, unloved by Conservatives, and overwhelmed and underwhelming on the Brexit file.

A minority parliament leaves her party little room for maneuver, either for fundamental Brexit rethinks or to outright question Mrs. May’s EU strategy. Opposition parties are not duty-bound to present their own Brexit agenda, merely to scrutinize government plans, which they do with relish. The more Tories squirm uncomfortably, the better chance of Jeremy Corbyn and his Labour colleagues taking office at the next general election. Tories see power slipping away, and Fleet Street reports that as many as twenty MPs are positioning themselves for a run at the top job, while the Prime Minister herself tries to shrug off foreshadows of doom by eliciting proposals for national renewal once Brexit is accomplished and she can lead her troops into battle when the writs are next dropped. Amidst this gloomy backdrop, Conservative fortunes may improve from an unlikely source.

Donald Trump travels directly to England following NATO talks in mid-July. While styled as a working meeting to lessen malcontents protesting a presidential state visit, the Prime Minister shouldn’t miss an occasion to welcome an ally eager for fair trade. Insiders say their relationship is warmer than appearances betray, with Mr. Trump beginning conversations with Mrs. May on the topic of Brexit with the jocular enquiry “Are you out yet?” He will also meet Elizabeth II at Windsor Castle, where the two Brexiteer heads-of-state will no doubt talk informally about the bilateral opportunities that await their two countries.

Such discussion is already afoot. Mr. Trump’s National Security Adviser John Bolton assured a European Research Group meeting last week that the Administration wants to “accelerate” U.S.-UK trade agreements as soon as the EU exit is complete. (British patriots will be reassured that they have a friend in the White House again.) Former U.S. official Ben Rhodes confirms that it was former prime minister David Cameron who prompted Barack Obama, at a joint press conference before the 2016 referendum vote, to warn that a post-Brexit Britain would languish at the “back of the queue” for future trade deals with the United States. Or as Brits would castigate their former PM, “that’s not cricket.”

It would be no small irony if Donald Trump were “the single man” who rescues Mrs. May’s foundering Ministry and restores the promise of Britain freed from the EU bureaucratic yoke. Always eager for a challenge, if anyone can craft a trade deal that will be the first step in making the United Kingdom “great again” on the global stage, the self-described “Mr. Brexit” is the man to do it.