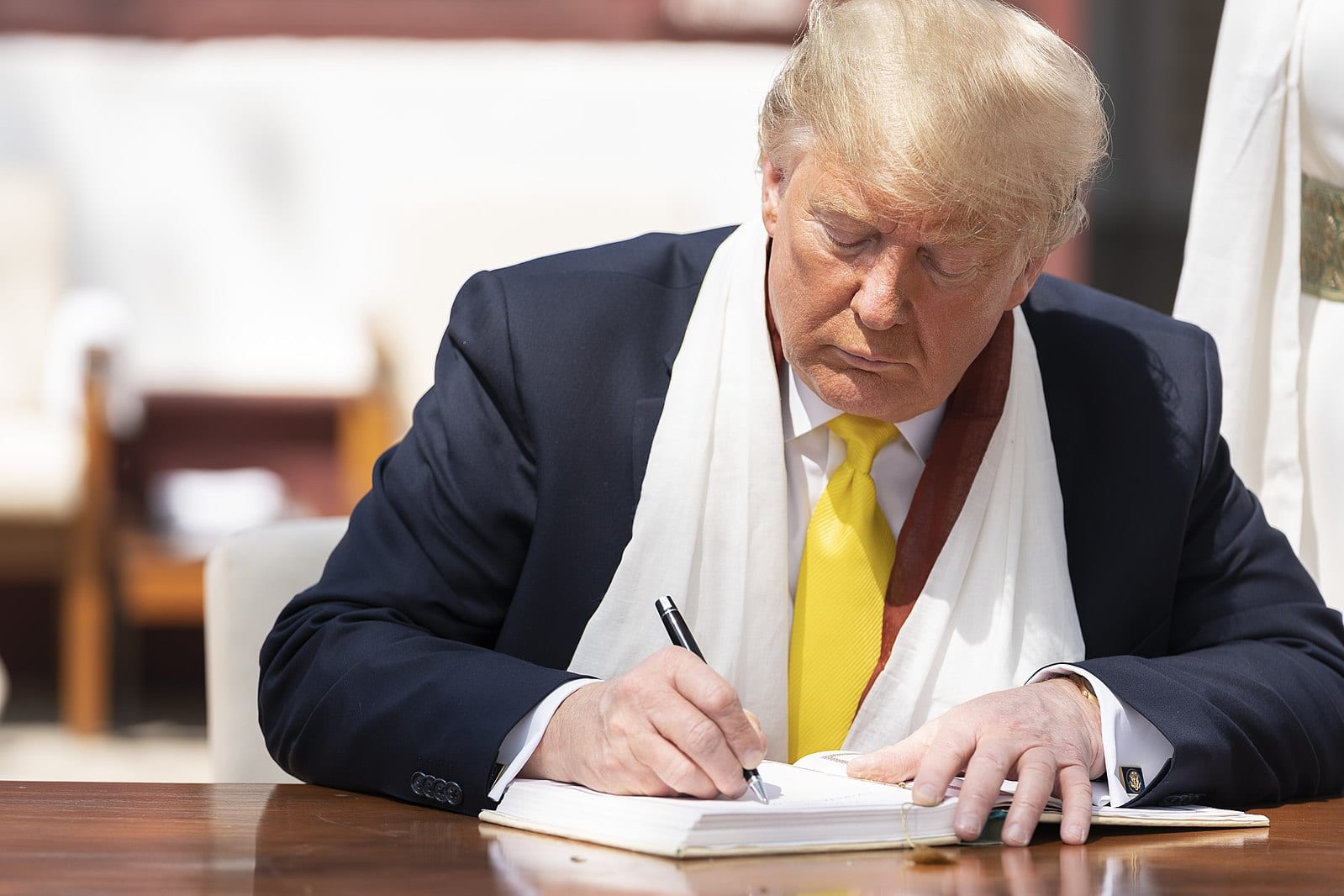 President Trump has just received a hero’s welcome from the people of the Republic of India. And with Trump’s affinity for direct negotiation at the chief executive level, the colorful pageantry of dancers, camels, and Mahatma Gandhi’s spinning wheel accorded to him by his Indian hosts fits well with the cult of personality, something very much evident throughout Indian history.

Thus far, Trump has announced the achievement of an arms deal for India of over $3 billion. It includes Apache attack helicopters and MH60 multi-mission helicopters and other equipment for the Indian military, in an effort to become what Trump said was “India’s premier defense partner.” The U.S. is already India’s No. 2 supplier of military equipment, after Russia, which still supplies 58 percent of India’s military hardware, but that has dropped substantially during the past five years.

In his two-day visit, Trump has touched the hearts of the Indian people. His first stop was the state of Gujarat and the Sabarmati Ashram near Ahmedabad, where Mohandas Karamchand Gandhi lived and organized the Satyagraha (truth force) resistance against the British Raj. As an ascetic Hindu, Gandhi favored cottage industries and rural self-sufficiency and would not recognize the industrializing India of today, bristling with skyscrapers and high-tech industrial parks. Nonetheless, the bespectacled, frail persona of the Mahatma (great soul), as he is known, is revered by generations who did not live during the tumultuous earlier part of the 20th century. Gandhi is a powerful symbol of humility and renunciation of things worldly.

Noting that India is about 14 percent Muslim, and balancing Gandhi’s devout although secular Hindu outlook, Trump visited the Taj Mahal, a grand monument in Agra on the banks of the Yamuna River (also called Jumna) in the state of Uttar Pradesh. It was constructed by the celebrated Shah Jahan, the fifth monarch of the Mughal Empire and grandson of Akbar, the third Mughal potentate, who was admired for his tolerance, promoting Hindu–Muslim unity through the intermarriage of his nobility. The Mughal Empire represented continuing Muslim authority that followed the rule of Turks and Afghans in the subcontinent. A 17th-century monument erected during the height of Mughal architectural splendor, the Taj Mahal is a mausoleum containing the tomb of consort Mumtaz Mahal as well as that of Shah Jahan. The Taj Mahal is a symbol of eternal love; the Indian poet Rabindranath Tagore, who was awarded the Nobel Prize in Literature in 1913, called the Taj Mahal “a teardrop on the cheek of time.”

In the ancient world, the 3rd-century Emperor Ashoka is another ruler with the cult of personality, well remembered today. Indeed, the Ashoka columns placed throughout India are stone pillars containing proclamations by this Mauryan king, who is said to have forsworn war and adopted Buddhism after he saw the devastation of his Kalinga campaign in what is now the modern states of Odisha and Andhra Pradesh. The emblem of the government of India is the column of Ashoka, with four lions and a Dharmachakra, or wheel of law, a symbol in Buddhism and Hinduism.

The Indian independence movement was also known for great personalities: Jawaharlal Nehru, India’s first prime minister; Sardar Patel, architect of the emerging federal system who negotiated the accession of the maharajas and nawabs to the Indian union; Muhammad Ali Jinnah, the first governor-general of Pakistan and also known as the Quaid-i-Azam (great leader); and of course Mahatma Gandhi. While these are among the best-known players in the drama of independence and partition of the subcontinent in 1947, there was plenty of bench strength. And since independence in India, the prime ministers Nehru; Indira Gandhi, his daughter; and now Narendra Modi loom particularly large in the cult of personality.

Indians have long admired U.S. presidents and the U.S. in general. Probably the only exception was Richard Nixon, whose support for Pakistan’s Yahya Khan when Bangladesh emerged out of East Pakistan was deeply troubling for India, which supported the aspirations of the Awami League’s bid for independence expressed through elections in 1970.

President Trump is doing his best to continue a strategic friendship with India that has covered four U.S. administrations and three Indian ones. A common fear of China includes its dramatic rise as the world’s second-largest economy, its lack of commitment to a rules-based order, its military buildup and creation of tension in the South China Sea, and an aggressive Belt and Road Initiative to foster its hegemony. These are driving forces to bring the U.S. and India close together as partners.

“Namaste Trump” will be long remembered symbolically by Indians, like a successful presidential visit that leverages the cult of personality. With language, democracy, entrepreneurship, and a legal system in common, what our president may be saying in his emotional branding effort is this: “We like you — and are like you … and vice versa.”