by Jeffrey Lord
Herbert Hoover in 1930, amid senators and cabinet members standing behind him (Library of Congress/Wikimedia Commons) 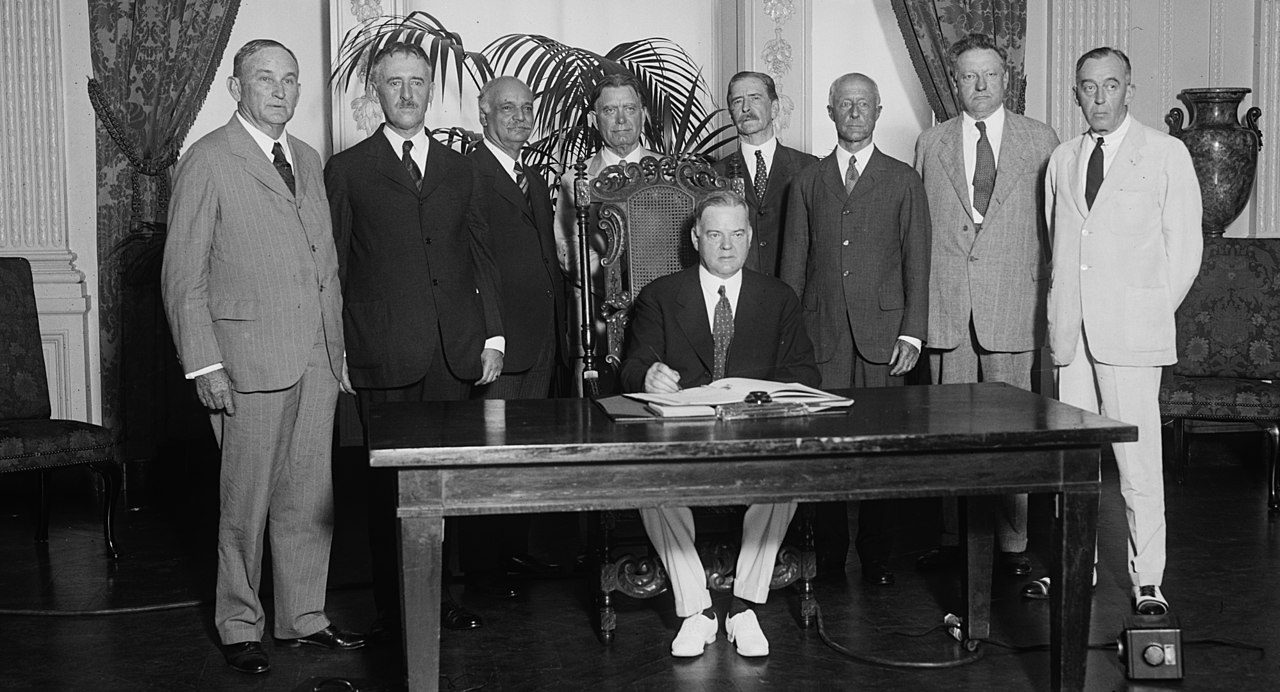 Herbert Clark Hoover was, for the bulk of his career as a mining engineer and later administrator of various post-World War I food relief agencies as well as Secretary of Commerce in the Harding and Coolidge presidencies, considered a star. On that basis he was elected the 31st president in a popular vote landslide in 1928.

Then, in the fall of 1929, the stock market crashed and the American economy tanked. The Great Depression had begun — and American politics changed for decades. Herbert Hoover was made into a villain by his Democratic Party opposition. His name was made synonymous with poverty, the shantytowns that popped up across the country filled with impoverished Americans became known as “Hoovervilles.”

The political impact was a tidal wave of Democratic victories. A tidal wave that swamped Republicans for decades. A Republican Congress vanished in the 1930 elections, not returning to Republican hands for sixteen years. And after a brief interlude of two years from 1946-1948 and again from 1952-1954, the GOP lost control of the Senate for the next 26 years and the House for the next 40 years.

“I come out of the Democratic Party, which in this century has produced Woodrow Wilson and Franklin Roosevelt and Harry Truman, and which supported and sustained these programs which I’ve discussed tonight. Mr. Nixon comes out of the Republican Party. He was nominated by it.”

The message to a nation that still vividly remembered Hoover was clear: Richard Nixon was the political heir of Herbert Hoover. JFK was the heir of the beloved progressive troika of Wilson, FDR, and Truman.

All of this comes to mind as polls show the approval numbers for President Joe Biden plummeting. A new Fox poll has him “dropping 11 points even among Democrats.” And on the economy? “Almost 9 in 10 voters worry about inflation, as most report prices are up for everyday items — assuming they’re not out of stock altogether.”

Over there in Politico is this headline:

Why Biden’s poll numbers are dropping

It’s been an eventful — to say the least — two months in the White House. There was the Delta surge and the chaotic Afghanistan withdrawal, plus the ongoing southern border crisis and Democrats’ continued bickering over President Joe Biden’s domestic agenda. Fold in the emerging supply chain issues right before the holiday season, and well, you can see the results in Biden’s approval ratings.

They’re not good. The Quinnipiac University and Grinnell College surveys released this week put Biden’s job performance at 37 percent. There are rosier numbers, such as a Fox News poll released tonight, that has the president at 46 percent. But if you average all the polls, Gallup Senior Editor Jeff Jones said, Biden rates favorably with roughly 43 percent of Americans.

In other words? In other words Biden is in serious danger of becoming the modern — and Democrat — version of Herbert Hoover. Making himself and his party so unpopular that, as with Hoover, he and they become the walking, talking symbols of economic disaster — with the added liability of a visibly catastrophic foreign policy embodied by the televised images of American allies in Afghanistan frantically swarming American transport jets to escape the advancing Taliban. Then there’s the also televised images of chaos at the U.S. southern border. Not to mention the skyrocketing cost of gas and groceries and now, the disrupted supply chain. And you wonder why sports stadiums spontaneously erupt in chants of “Let’s go Brandon!”?

Already all of this is having an effect in the Virginia governor’s race between Democrat and former governor Terry McAuliffe and Republican Glenn Youngkin. Here’s just one headline on the race, this one from Bizpac Review:

What has clearly dawned on McAuliffe and other Democrats as well is that Biden is becoming a Hooveresque albatross around the neck of Democrat candidates everywhere.

And if things keep going the way they are, that Biden albatross will be there for Democrats for one very long time.