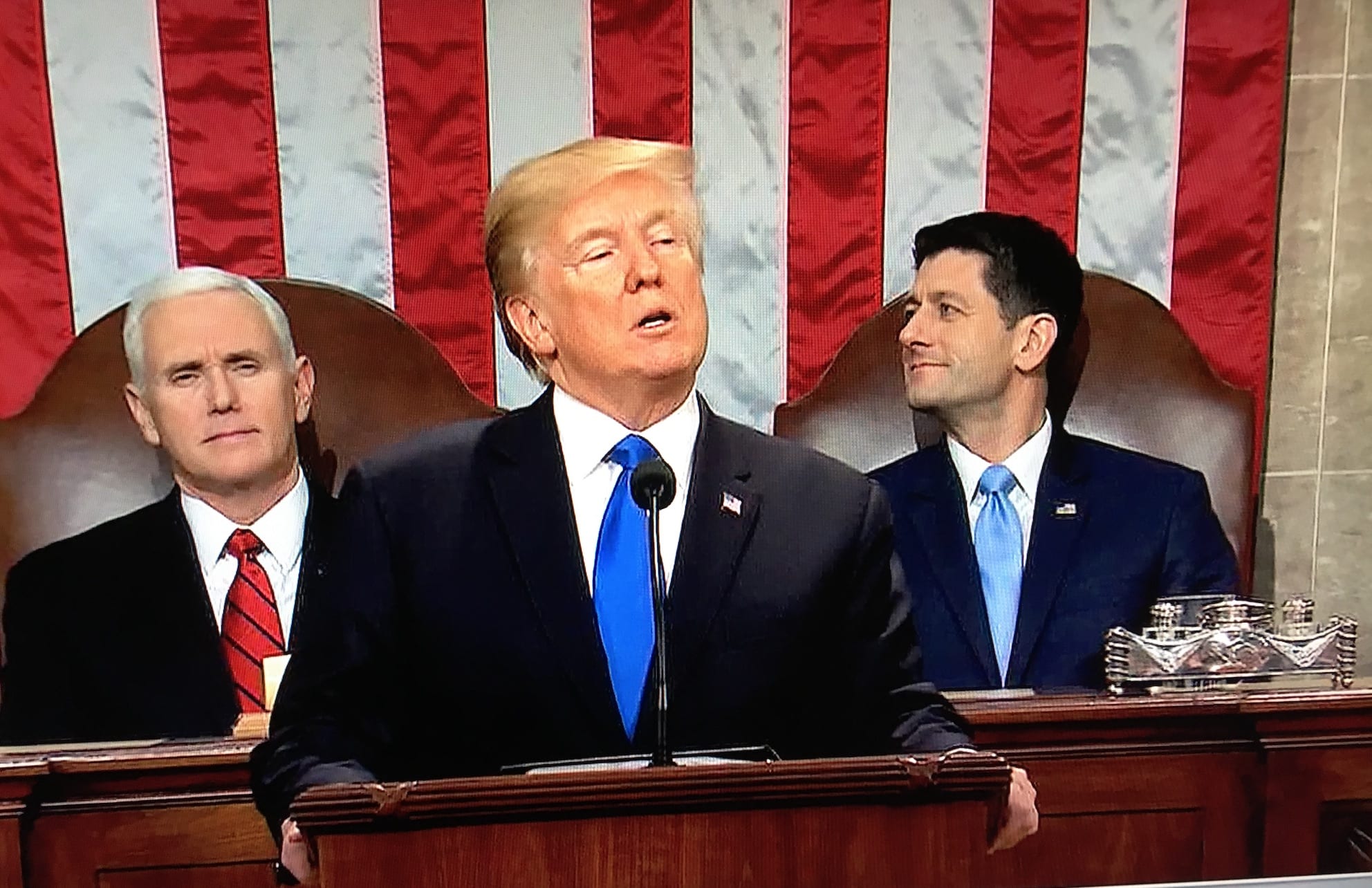 Donald Trump offered an olive branch. His opponents took it as a brickbat.

The president’s first state of the union addressed offered a half-hour laundry list of accomplishments. He noted 2.4 million new jobs, including 200,000 in manufacturing. He touted $8 trillion added in value to the stock market. African-Americans and Latinos, two of the groups most steadfastly opposed to his administration, enjoy their lowest unemployment rates on record, he said. But when the camera panned to the left side of the chamber looking at him, few clapped — a silence that spoke volumes. The people to whom the president reached out to actualize a bipartisan agenda remain invested in his failure.

True, the president noted a few partisan achievements: the passage of massive tax cuts, the elimination of Obamacare’s individual mandate, and the placement of Neil Gorsuch on the Supreme Court. But the speech, presented in a tone contrary to his tweets, sought middle ground.

Does such a place exist in Washington in 2018?

The president pushed reciprocity in trade, upwards of $1.5 trillion in infrastructure spending, cheap prescription drugs, job training, paid family leave, and an immigration deal that includes a path to citizenship for illegals. This hardly strikes as the stuff right-wing droolers consider red meat. Yet one foreseeing the side of the aisle not partaking in the “USA!” chants suddenly embracing any of this seems not the stuff of the American Dream but a hallucinogenic one.

This stands as an election year, and Democrats smell blood. They do not seem in a conciliatory mood. Their constituents, after all, want confrontation, not compromise. Just ask Chuck Schumer, who helped avoid a government shutdown earlier this month only to dodge tomatoes from the citizens most interested in a government takeover of so much of our economy.

Democrats seem poised to cut off their nose to spite their face on infrastructure legislation, a watered-down amnesty deal, and much else they could not get passed (but wanted to) under the previous Democratic administration. To loosely paraphrase the great philosopher Bono, they’re only hanging on to watch Trump go down.

The cheap but common trick of presidents daring the opposition not to clap on applause lines hailing God, the flag, apple pie, and much else rating applause — used early and often on Tuesday night — seems a microcosm of the entire speech. Trump appears to dare Democrats to reject what so many of them profess to stand for, if only to expose them as purely political actors out for partisan gain rather than the betterment of the country.

One can debate whether $1.5 trillion in new spending on infrastructure ranks as wise policy in the face of a $20 trillion debt and a deficit creeping back up toward a trillion dollars. But Democrats generally regard infrastructure spending as a good idea. Will they continue to regard it so now that Donald Trump attaches his name to it?

“A new tide of optimism was already sweeping across our land,” the president, referencing the first time he addressed Congress, announced at the outset of his speech. “Each day since, we have gone forward with a clear vision and a righteous mission, to make America great again for all Americans.”

Not everyone in the chamber shares this vision. And even Democrats who do, likely no longer do so if they must share it with Donald Trump.