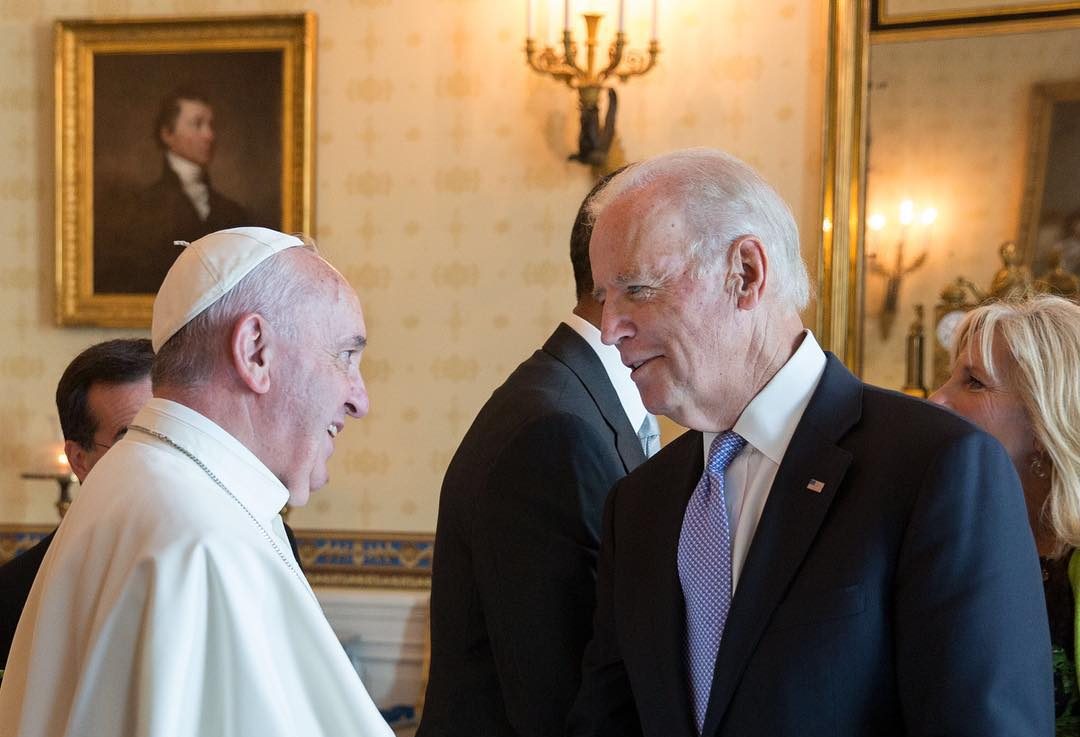 The anticipated political alliance between Pope Francis and Joe Biden is already beginning to form. The pope recently tweeted out that society needs to “build back better,” which is one of Biden’s signature phrases.

Both Biden and Pope Francis gravitate to the jargony rhetoric of the United Nations. In a recent New York Times op-ed, the pope sounded almost like a parody of a globalist ideologue, calling for a COVID-inspired reset: “We cannot return to the false securities of the political and economic systems we had before the crisis. We need economies that give to all access to the fruits of creation, to the basic needs of life: to land, lodging and labor.”

This is what’s foremost on the pope’s mind — not religion and morality, but politics and economics. And on these temporal matters he finds himself in the same company as Joe Biden. They both would like to see the coronavirus crisis serve as a pretext for bigger government and more socialist economics. They would agree with Canadian Prime Minister Justin Trudeau, who said, “This pandemic has provided an opportunity for a reset. This is our chance to accelerate our pre-pandemic efforts to reimagine economic systems that actually address global challenges like extreme poverty, inequality and climate change.”

In all this talk of increasing statism and socialism, freedom, naturally, gets short shrift. The pope even suggests that concerns about freedom make one a dangerous ideologue:

Yet some groups protested, refusing to keep their distance, marching against travel restrictions — as if measures that governments must impose for the good of their people constitute some kind of political assault on autonomy or personal freedom! Looking to the common good is much more than the sum of what is good for individuals. It means having a regard for all citizens and seeking to respond effectively to the needs of the least fortunate.

It is all too easy for some to take an idea — in this case, for example, personal freedom — and turn it into an ideology, creating a prism through which they judge everything.

This is a remarkable statement, given that the COVID-driven shutdowns have led to the arbitrary and widespread suppression of religious freedom. Governments, which operate under a decidedly secularist bias, have hampered the Catholic Church horribly. Yet they receive no condemnation from the pope. He trusts them to “build back better.”

It is hard to imagine any of his predecessors reposing so much trust in the collectivist judgments of secularist-minded central planners. Nor is it possible to imagine past popes treating pols who stand athwart the natural moral law as worthy partners in a “great reset.”

According to traditional Catholic teaching, the attainment of the common good is impossible without adherence to God’s intentions for mankind. Where is this in the pope’s analysis? Does he think Biden can “build back better” while supporting abortion, undermining the traditional family, and calling for a transgender revolution? A pope, for whom the natural moral law served as a central focus, wouldn’t join Biden’s juggernaut but derail it. The “great reset” rests upon what Pope John Paul II called a “culture of death” and Pope Benedict XVI called the “dictatorship of relativism.”

In a rich historical twist unremarked upon by the media, Biden and the pope are fostering the very political partnership that the first Catholic president, John F. Kennedy, promised to avoid. Kennedy said that he would never let the pope dictate his politics. Biden has made no such vow, recognizing that the pope’s left-wing impulses mirror his own. The Democrats, usually so censorious of “religion in politics,” are perfectly happy with this arrangement, as they see the propagandistic possibilities of enlisting a pope in the promotion of their policies. This is part of their project to sanctify partisan stances on immigration, climate change, gun control, and the like — to present them as “moral” and not “ideological.”

It is an abuse of the pope’s authority to aid this sham. His equation of Democratic economic policies with “Catholic social justice” is not based upon perennial teaching but upon his own political predilections. And it is this bias that blinds him to the anti-Catholic presidency to come under Biden. America will not “build back better” under Biden but revert to the secularism and anti-Catholic morality of the Obama years.