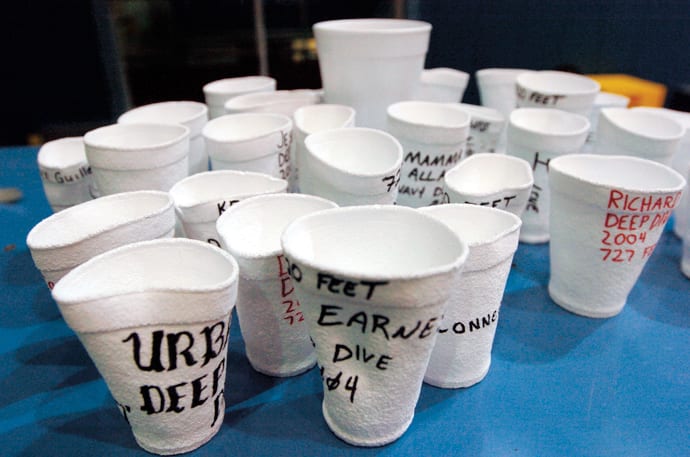 While the conservative commenteriat has worked itself into a frenzy over the recent spate of proposed plastic straw bans, few pundits have taken notice of bans on something that’s far less cherished, yet far more useful: polystyrene. Notably, beginning on January 1, New York City will begin its ban on the material and many other liberal cities are following suit.

The history of polystyrene, which is usually encountered in the form of Styrofoam, began in 1839, when a German apothecary, Eduard Simon, found that an oily substance he had distilled from the resin of the American sweetgum tree became jelly-like after sitting for a few days. It took another century, however, for anyone to realize that the stuff might be industrially useful, when I.G. Farben started experimenting with it in the hope that it could become a cheaper alternative to die-cast zinc. Later, Dow Chemical developed the Styrofoam process and in 1960, the Dart Container Company started shipping out cheap and disposable foam cups to the American public.

For nearly three decades, there passed a period of fruitful growth for polystyrene products. Manufacturers molded the material to fit the varied needs of American industry; polystyrene-packing peanuts, coolers, cutlery, and takeout containers became the ubiquitous trappings of the American way of life. But, as it says in Ecclesiastes, “To every thing there is a season,” and toward the end of the 20th century, the frost began to settle.

By the late 1980s, municipal governments with spirited populations of environmental activists like Berkeley, Portland, Freeport, and San Francisco were lobbied zealously, and often successfully, to ban the material on the grounds that it was not biodegradable, virtually impossible to recycle, and a blight to various ecological niches.

While these grim claims might have been somewhat defensible in the late ’80s, they don’t hold much weight in light of recent scientific advances and findings. According to a recent study published in Environmental Science and Technology, mealworms have little trouble digesting polystyrene. Likewise, researchers have found that when polystyrene is incinerated at suitably high temperatures, not only are the two main chemicals generated only water and carbon dioxide, but because of the amount of heat released, polystyrene can be used to generate electricity. Sadly, though these bans were based upon airy rhetoric, their economic effects are very substantial.

Many of the businesses that rely on polystyrene products, such as street food vendors and small fast and casual restaurants, operate on relatively thin profit margins. So, whenever a municipality imposes a ban on polystyrene products, these businesses are forced to switch to the cheapest alternative available. According to a recent study funded by the American Chemistry Council, NYC business would have to spend nearly double to purchase non-polystyrene equivalent products. Effectively, these bans raise the cost of doing business, make market entry harder, and encourage a less competitive economic environment for businesses that rely on products often made from polystyrene. Worse, such bans don’t even reduce pollution.

According to a recent report published by the Independent Institute, paper alternatives to polystyrene products typically create more pollution than their polystyrene equivalents and empirical research indicates that polystyrene bans don’t reduce pollution levels. For example, a study examining an ongoing ban on polystyrene cups in San Francisco found that the ban “does not decrease overall litter but causes a shift in litter to other materials.” And according to a report published by the California State Water Resources Control Board, “mere substitution would not result in reduced trash generation if such product substitution would be discarded in the same manner as the banned item.” Clearly, these bans, rather than reducing waste, merely raise costs. But even if these bans successfully reduced waste without inflating costs, they might still be indefensible.

The justifications for polystyrene bans are largely centered on the extent to which polystyrene waste causes harms. In On Liberty, John Stuart Mill writes, “The only purpose for which power can be rightfully exercised over any member of a civilized community, against his will, is to prevent harm to others.” This notion lies at the heart of societies that conceive of their legitimacy as stemming from a self-interested social contract and the U.S. is definitely one such society. Using this standard, while it would make sense to enact commercial bans on materials like asbestos and lead-paints — which consumers can’t easily recognize as communally dangerous — it would be unjust to ban something like polystyrene, which only harms the stability of ecological niches. Essentially, while it may be worthwhile for individuals to cut down on polystyrene waste, it isn’t justifiable to enact a ban on the stuff.

These bans are the products of well-intentioned rhetoric and vigorous activism; it’s easy to see why municipal legislators often support them. However, these bans don’t reduce pollution, are harmful for small business owners, and are arguably unjustifiable. Legislators should resist the urge to carelessly hop on the anti-polystyrene bandwagon and carefully consider the substantial costs and injustices that such bans impose.