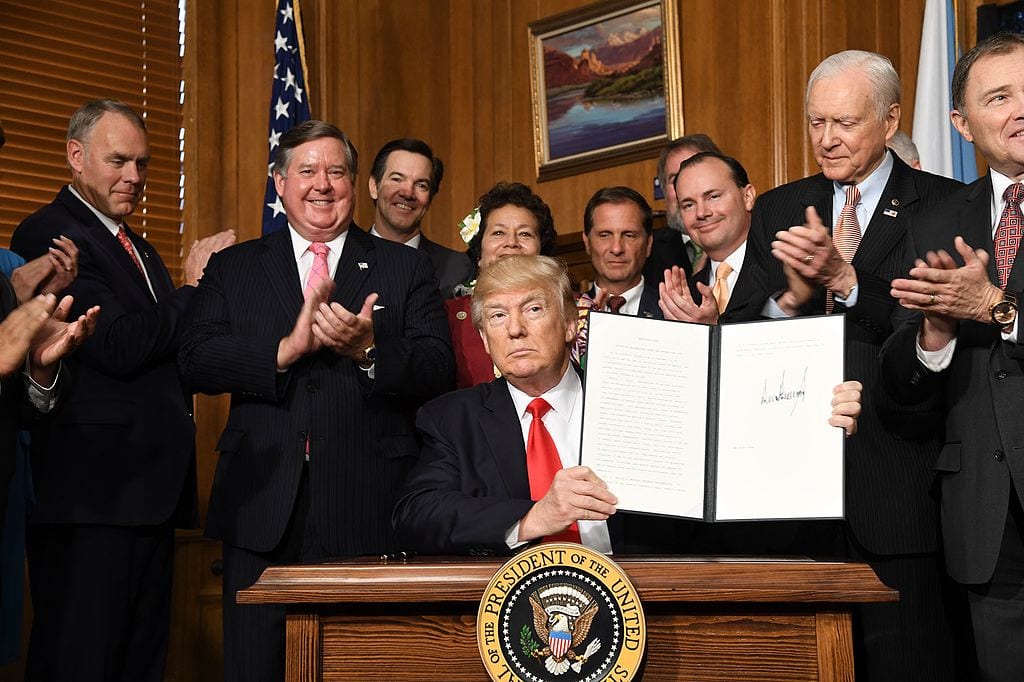 From Republican Sen. Orrin Hatch of Utah, via a column in the Wall Street Journal, comes a call for “détente in partisan hostilities” of the sort that disfigure our politics: the ongoing ya-ya-ya-you-lousy-#@#@$@! that we have come, sadly but inevitably, to associate with national governance. It seems obvious Americans no longer like or trust each other — and can’t resist saying so without spitting.

“America’s culture war has reached a tipping point,” writes Hatch, president pro tempore of the chamber to which he was first elected in 1976. “… Something must change before anger succumbs to violence.”

He calls, accordingly, for the adoption of “certain conventions for cultural combat,” starting with the exclusion of “communal spaces from politicization,” and followed by attempts to “resist the politicization of everything.” Then we must “discourage the harassment of public figures.” There should be “a laying down of rhetorical arms” as we seek “a path to health and healing.” And what of Hatch’s s own president? “I have repeatedly encouraged him to use Twitter as a tool for good rather than as a cudgel for division. I have likewise discouraged him from calling the press ‘the enemy of the people.’” Without notable effect, it would seem.

You can see the noose through which Hatch has thrust his head. He is the preacher in the bordello, the vegan at the cattlemen’s convention. He doubtless knows as much. What, then, to do? Maybe just get some conversation going.

There is ample to talk about, having to do primarily, it seems to me, with our decision to place politics at the center of human concerns. No temptation is older. The aim of politics is only incidentally good governance. Its core purpose is the acquisition of power over others — to assure the kind of governance powerbroker A or B regards as best. Some “good” is always in the powerbrokers’ minds; however, never the kind 100 percent of the people would endorse, given the infinite variety of human interests and viewpoints.

So much for the political science. What of living history? Politics as a more or less friendly enterprise, run by more or less friendly people, went out of business in America half a century ago: the riotous, rotten 1960s. People fell into hard-nosed and demanding moods — the left for the use of government to make “racists” and “male chauvinists” behave themselves, the right for the use of government power to make government less powerful, less controlling.

The habit persists. Here we are today — demanding like crazy, with no consensus as to what the greatest number of people actually want. This naturally drives partisans up the wall; makes them shout grosser and grosser insults. The place we are in is a very human place; not unfamiliar at all if we look at history.

The most interesting point in Sen. Hatch’s analysis is his call to stop turning life itself into one big political issue — everything, from morning to nighttime, right-wing or left-wing; racist, sexist, commie, whatever. The left wants people on the right to quit doing what they’re doing — extolling family life, proclaiming Christian moral ideals, encouraging work and achievement, praising America as a beacon of freedom. The right wants the left to quit demanding apologies for everything Americans were once taught to value, from morality to capitalism. None of these irksome quarrels touches on the things American government exists to do — keep the peace and guarantee justice. The use, actual or intended, of political power to stipulate personal beliefs is what gives modern politics its acrid odor.

Hatch is right to ask that the bugles sing truce. Shouting never invites agreement; it invites more shouting. Provocation leads to provocation, and in a straight, unvarying line to Donald John Trump. The invective that Democrats, and some Republicans, hurl his way produces… Tweets and juttings of the presidential jaw. What else might we expect? That the finger-snappers and foot-stompers of the political word are going to bring us peace on earth, good will toward men? Not without a little encouragement from the voters they’re not.