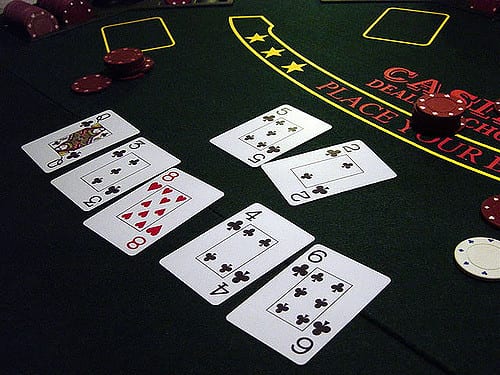 If  you’ve watched any cash-game poker on TV, you’ve probably seen some oddities of cash game play that you’ll never see in tournaments. Players come up with a variety of oddball plays to either create action or reduce their variance, and maybe you’ve experienced them in your own games. If not, you might want to think about incorporating them.

For example, you may have seen players “run it twice.” This is sometimes done in high stakes game after two players are all in, and is especially prevalent in Pot-Limit Omaha where the values of hands run so close together percentagewise because each player is dealt four cards.

Say that one player has a set and the other has a flush and straight draw. If the dealer puts out the turn and river twice and both players win one time each they would split the pot. If one player wins both times, she gets to keep the entire pot. If the players got all of their chips into the middle on the turn, then the dealer would just put out two rivers at that point.

On a famous episode of the well-loved and dearly departed cash game show High Stakes Poker, pro Barry Greenstein got all in before the flop with A-A versus fellow pro Sammy Farha’s K-K. Farha asked to run it twice, but Greenstein declined — to his misfortune. Farha made a set of kings to win the pot. Greenstein, however, was wise not to run it twice since he had about an 80 percent edge. That’s a big edge to give up by running it twice.

You may have also seen a “straddle.” This is a blind bet twice the size of the big blind made by a player usually directly to the left of the big blind. If the blinds are $3 and $5, the straddle would be for $10. Some games allow players to straddle from anywhere on the table. I’ve also seen re-straddles, where another player would straddle for $20 on top of the original straddle. (Don’t do this. It’s pure gambling as you’re likely to bloat the pot enormously with a random hand.)

A growing trend is the “Mississippi straddle,” which is a straddle on the button, directly to the right of the small blind. Because this move allows you to be last to act before the flop and you will have position on all other players the rest of the hand, the Mississippi straddle can be a smart play, particularly in Pot-Limit Omaha in which players tend to play more of their hands.

You’ve probably also “rabbit hunted” in your poker game, even if you’re not familiar with the term. That’s the act of looking at the turn and/or river after someone bet and the other player(s) folded just to see if a certain hand would have been made. It doesn’t have an effect on the game other than to satisfy someone’s curiosity. The practice is not allowed in tournament play because it unnecessarily slows down the game, and is also prohibited in many casinos — particularly those who rake each pot; time is money, after all.

What today are known as hole-card cameras were first known as “rabbit cams.” These devices are what transformed boring televised tournaments — grass-growing championships may have been more entertaining — into theater on the small screen. Now viewers can follow along with the action as it unfolds, putting themselves in the position of the players to live out their high-stakes dreams — virtually. While watching TV tournaments or cash games won’t help you immediately, studying the plays the pros make might aid you in a future game by helping you understand some advanced concepts.