by Larry Thornberry
David Suchet and Angela Down in “Poirot,” 1989 (IMDB.com) 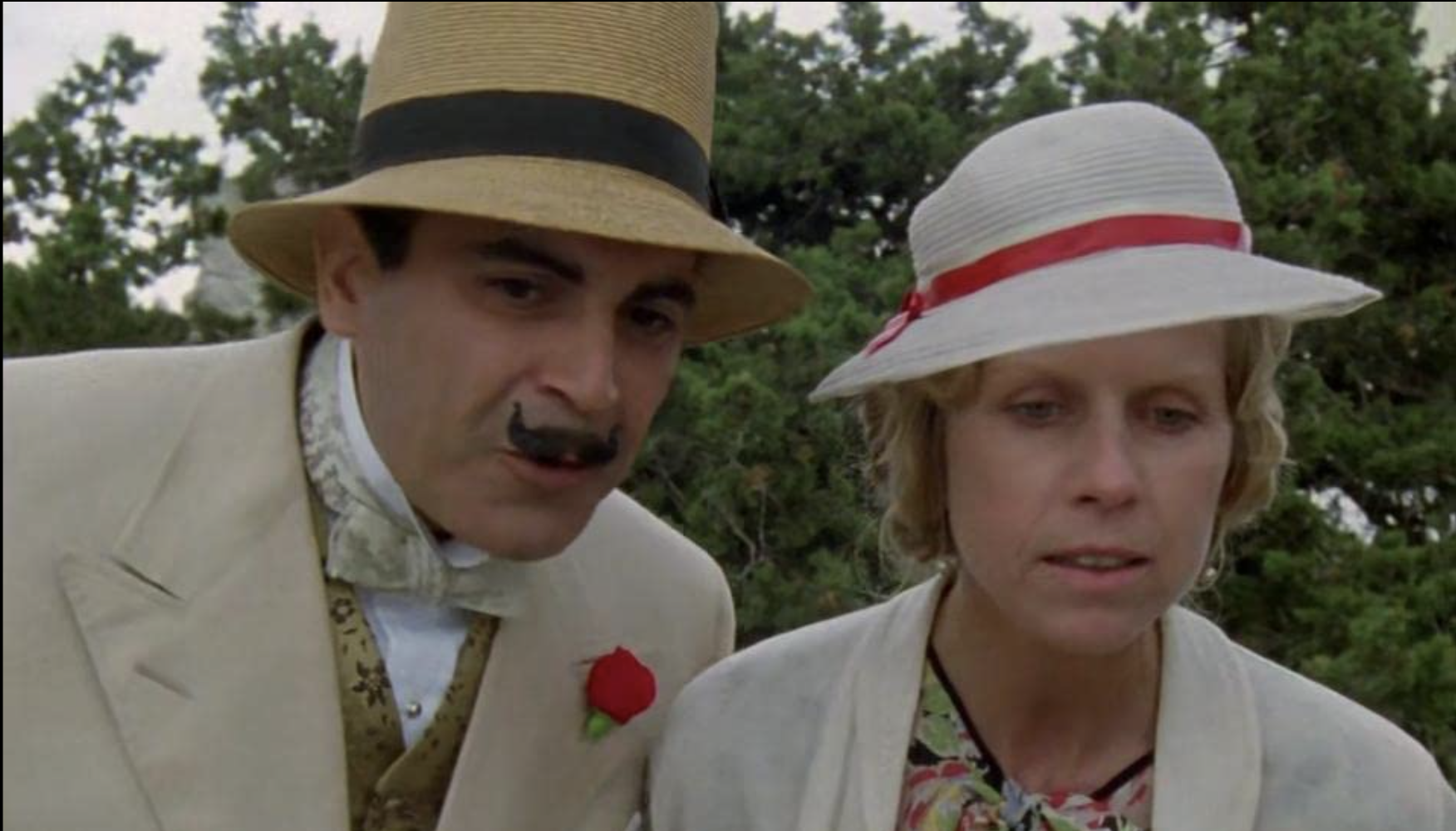 Agatha Christie’s Poirot: The Greatest Detective in the World

There are many things to like about Mark Aldridge’s tour de horizon of the literary life of Hercule Poirot and his remarkable creator, Agatha Christie. My favorites are the chapters on David Suchet’s definitive portrayal of the great detective. It’s an easy case to make that Suchet’s Poirot is the only time Christie’s creation appears on the large or small screen.

Many actors, before and after Suchet’s long run, have played characters carrying the name of Hercule Poirot. A partial list of those who’ve brought the name to the stage, screen, or radio airwaves include Charles Laughton, Orson Welles, Albert Finney, Peter Ustinov, Kenneth Branagh, Ronnie Barker, Peter Sallis, and (I’m not making this last one up) Tony Randall. None have really made a serious attempt to present the Poirot from Christie’s pages.

Ustinov is probably the best known of these, having brought the Poirot name to a half dozen feature films or made-for-TV movies. These flicks enjoyed varying degrees of financial and critical success, but none featured Christie’s reserved and fastidious Poirot. The late Ustinov was a one-trick pony who brought the same clownish tics and mannerisms to every role he played. There’s gentle humor in Chrstie’s quirky and dapper Poirot. But he’s never clownish.

The latest actor to take a shot at being Poirot and miss badly is Kenneth Branagh. His 2017 Murder on the Orient Express brings the windbaggery we see in so many of his other roles and directorial products. Even Branagh’s over-the-top mustache — a vital accessory in anyone’s Poirot — demonstrates his steadfast dedication to the notion that nothing succeeds like excess. (A Wall Street Journal reviewer describes it as a “hairy tidal wave splashed over Kenneth Branagh’s face.”) In addition to missing the character badly, Branagh’s movie, like so many stage and screen productions, changes the story so completely that it’s unrecognizable to Christie readers.

Not so with Suchet and the renditions of the stories he appeared in. He was chosen by the Christie family to play Poirot, which he did to perfection from 1989 through 2013 in 70 episodes broadcast in America mainly on PBS stations. Suchet nailed Poirot by doing his homework. In preparation for the role he read all of the 33 Poirot novels and more than 50 short stories. He made a long list of Poirot’s mannerisms, compulsions, prejudices, and opinions and brought them faithfully to the screen — the accent, the mincing walk, the ever-so-precise mustache, the compulsive orderliness. The result is excellent entertainment, and I recommend the series to readers of The American Spectator.

But, speaking of readers, to true Christie fans, myself included, the books are what count the most. Critics may sniff, unjustifiably in my view, that Christie was insufficiently arty and modern, but she’s the best-selling fiction writer in history. Only Shakespeare and the Bible have outsold her. Estimates of the sales of her more than 80 novels and nearly as many short story collections run between two and four billion. They’ve been translated into more than 100 languages. Her books still sell, making it clear that critics have missed a good bit that readers across the globe in their millions have not.

This charmingly written clearinghouse of all things Poirot can be read straight through or used as a reference work for those interested in individual books or screen adaptations.

Christie’s mysteries are not profound, though as she became more skillful as a writer she peopled her novels with more psychologically satisfying characters. “Why done it” was added to the essential question of “who done it.” She created an appealing world, mostly based in the romanticized English village, though Poirot and Miss Marple occasionally found cases abroad. Her stories are ingenious puzzles with enough clues fairly provided for the acute reader to have a fair shot of guessing who the malefactor is. They’ve given her readers intelligent escapist entertainments for more than a century, providing her readers with enjoyable time-outs from the big and small-picture trials that life throws at us all. She never tried to do more, but she was very good at this. And she had and still has the readers to prove it.

In Poirot, Aldridge treats readers to a chronological trip through all of Christie’s Poirot books, with mentions of those featuring her other recurring character, Miss Marple, and her stand-alone stories. He manages to give us the essence of each book without giving away any of the essentials Christie wanted readers to discover by turning pages. No spoiler alerts necessary. At no additional cost he throws in excerpts from contemporary reviews of the books. Along the way he tells readers a good bit about Christie’s development as a writer and her personal life, including her almost continuous problems with a rapacious Inland Revenue that could never seem to rake off enough of the rewards of Christie’s efforts to suit them. So this charmingly written clearinghouse of all things Poirot — Aldridge is a professor but he doesn’t write like one — can be read straight through or used as a reference work for those interested in individual books or screen adaptations.

Like Arthur Conan Doyle, who wearied of his Sherlock Holmes character but couldn’t abandon him as the reading public adored him, Agatha Christie was sometimes frustrated with Poirot but couldn’t retire him. Readers loved him. Besides, as was the case for Doyle with Holmes, Poirot was making Agatha a packet. She invented him for her first novel, The Mysterious Affair at Styles, which she wrote during World War I but which didn’t see print until 1920. She modeled Poirot after Belgian refugees she met while working in a hospital dispensary during the war. Her latest creation for Poirot was Elephants Can Remember, published in 1972, just four years before Agatha, now Dame Agatha, died and more than a half century after Styles. This was not one of her best. In a long career with many books, the quality of Christie’s work is uneven. And by 1972 Christie was 82 and had lost a few miles per hour off her fastball.

The last of Christie’s Poirots in print came in 1975 with Curtain, in which Poirot dies in solving a case. Christie wrote the book in 1940, intending it to be published posthumously. But her daughter, Rosalind Hicks, convinced her to publish it for the Christmas book season of 1975. So Poirot met his end on the page just four months before Christie departed herself in 1976 at the age of 86.

Agatha Christie is gone, but her books are still in print. I can think of no better guide to the full enjoyment of her fine entertainments than a trip through Mark Aldridge’s Poirot: The Greatest Detective in the World.

I’ll conclude with an observation from the late P. D. James, who on the basis of her Commander Adam Dalgliesh detective novels inherited the title Queen of Crime from Christie. In her 2009 Talking About Detective Fiction, James wrote,

I suspect that a traveler, stranded in an airport hotel overnight and finding in the bedside cabinet two novels, the latest winner of a prestigious literary prize and an Agatha Christie, would reach for the latter to assuage the half-acknowledged fear of contemporary travel and the discomfort and boredom of a long night.

I know I would.