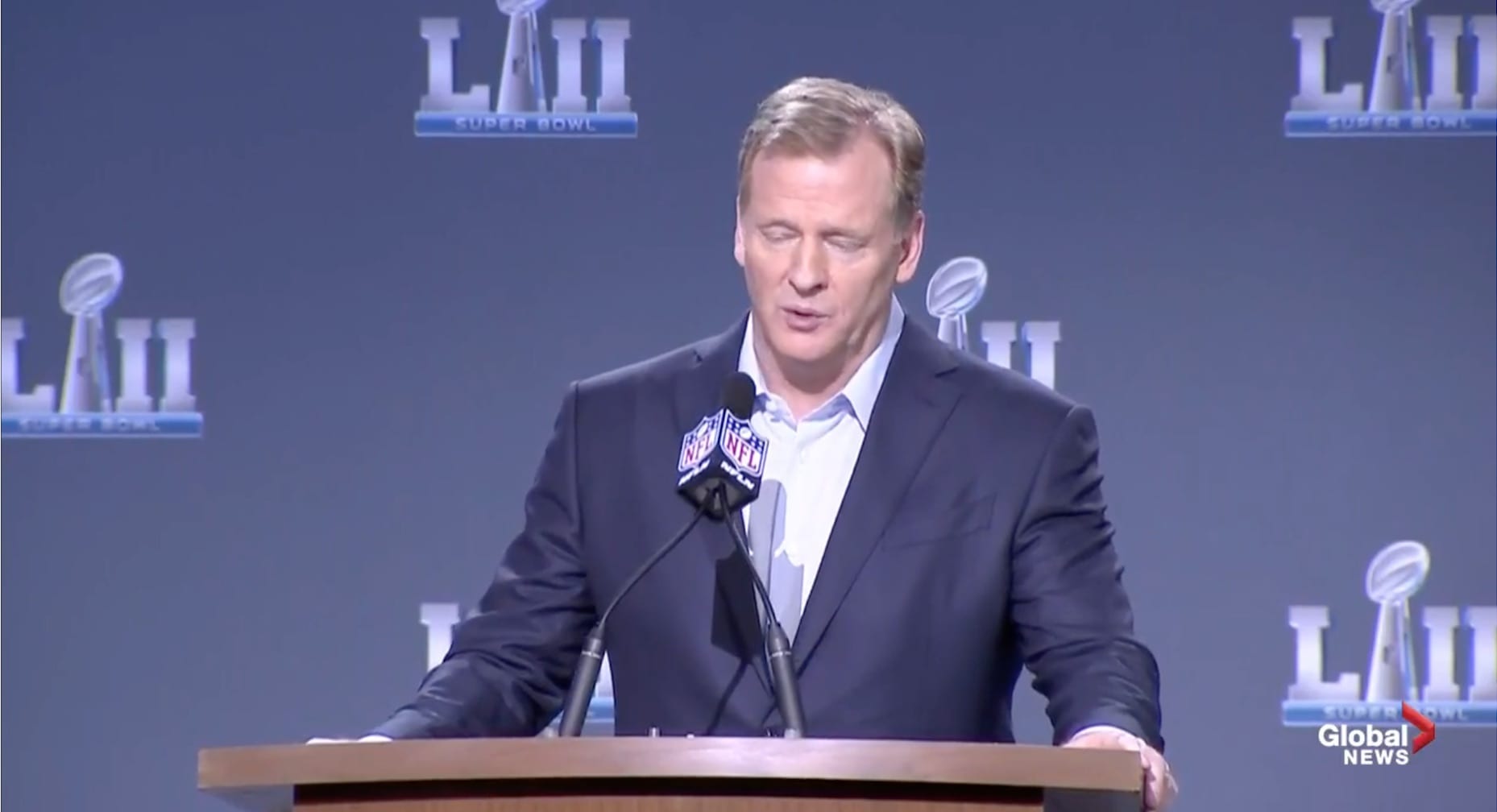 Welcome to Super Bowl week, which should be the pinnacle of good feelings and excitement for the game of football and the NFL. Instead, a new report just hit the newswire showing that the NFL is the sixth most toxic brand in America.

If you’re wondering how something so All-American and vanilla as a football league has sunken so far so quickly, look no further than the news this week that the NFL was banning a print advertisement in the Super Bowl program from a veterans group that asked: Please Stand for the National Anthem.

Much of the current mess the NFL is in is often blamed on Colin Kaepernick, the radical communist-sympathizing quarterback who is no longer in the league. It was Kaepernick who began the national anthem shenanigans two seasons ago by not standing for the anthem prior to the games.

Although there is much to dislike about Kaepernick’s anti-police and anti-flag antics, he is in many ways nothing but a strawman who was empowered by the NFL League offices in New York. It should be remembered the NFL had a policy in place in its operational manual regarding respecting the National Anthem well before Kaepernick took a knee. It was the League office in New York that purposely looked the other way when Kaepernick began his protest. If the NFL League offices had simply followed its own operation manual from day one, the national anthem protest movement would have been stopped in its tracks before it gained traction, and the NFL would still be enjoying sky high ratings, attendance, and positive brand awareness.

The most disturbing thing about the NFL’s fall from grace is that it wasn’t just a series of misjudgments by NFL executives that got it into its current mess. It might be forgivable, for instance, if the League office simply misjudged that the anthem protest would spread to other players, so they didn’t bother to act. No, the real scandal, when you get down to it, is the League office in New York sympathizes and to some degree agrees with people like Colin Kaepernick.

This idea is hard to fathom and believe but how else to explain the following?

• The League office doesn’t enforce its own policy on the national anthem, and even suggests at times that players protesting during the anthem is laudable in its intent.

• The League office does nothing when Colin Kaepernick dons socks while on the job with police officers represented as pigs, but does ban the Dallas Cowboys from wearing a decal on its helmet to remember five Dallas police officers who were killed on the job.

• The League office doesn’t suspend running back Isaiah Crowell who sent out a tweet in 2016, which contained an image originally broadcast by ISIS supporters showing a police officer graphically being beheaded.

Perhaps the most logical explanation to explain the poor judgment coming out of the League office in New York is nothing more than a case of office politics gone left. Take Commissioner Roger Goodell, who although being the son of a former Republican Senator, has shown through many comments critical of the President that he is well left of the center. Or take two Executive Vice Presidents the NFL hired on the same day in 2016, Joe Lockhart and Cynthia Hogan. Lockhart is late of the Clinton administration and Hogan of the Obama administration. Quite a coincidence that two key NFL Executives hired on the same day for jobs in a football league were known previously for partisan politics and both from the same political party.

It seems the left has done to the NFL what it has done to public education in urban areas, traditional marriage, Venezuela, border security, and virtually everything else it touches. It has run it into the ground.

Oh, we get happy talk from the League office about respecting the flag, veterans, etc. But even a four-year-old can sense this is nothing but rhetoric to try to appease the masses who are upset about the player protest because they are too unenlightened to understand that America is a stew of racists and its players are right to make a stink about it.

Sure, the League office regrets that the protests happened because it’s caused a massive decline in ratings, attendance, and brand respect, and it has created a headache for them that they would rather not have to deal with.

What one doesn’t sense is the League office regrets the player protest because it was ethically wrong for the players to do. Until that revelation happens, the NFL will be hopelessly lost in the fog of leftist logic.