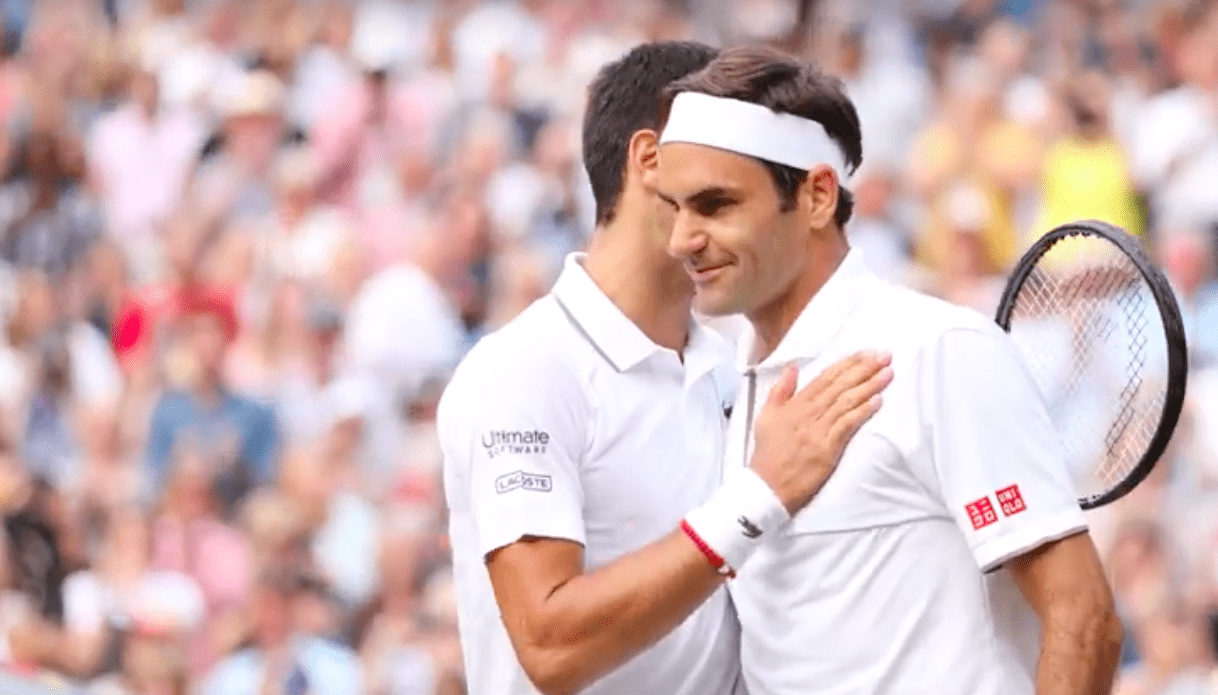 Roger Federer on serve. One point to close and he wins the match. It is hardly any point, and it is scarcely any match, but Federer has won on this court — Centre Court at the All England Club, in the London suburb of Wimbledon — eight times already, a record. The spectators, roaring like fans at Yankee Stadium in October at the end of nearly every point, silent as church mice during play, is sure it is about to happen, fifteen thousand spectators, witnesses to history.

It is the final in the gentlemen’s draw of the Championships, the Wimbledon Grand Slam, the oldest and most prestigious of tennis competitions, and Roger Federer is, not to understate the case, the local favorite. He is elegant, and at 37 as agile and athletic as ever and, even when seen from afar thanks to TV, he has been playing as well, if not better, than at any time in his illustrious career (he first won here in 2003, and his most recent win was in 2017), and — again, this is from a distance — he seems to have been outplaying his opponent, having taken the fourth set 6-4 and the second 6-1, and his own two losses happened in tight tiebreakers.

He is a break up, serving at 8-7. It is difficult to imagine Federer not holding at such an enormous moment.

But his opponent is Novak Djokovic, who has been beating him consistently in these finals, on this very court, in recent years. True to form — he is the best returner on the Tour — he rips the Federer service back for a mean winner and, it is now 40-30. Another match point — championship point — and practically the same thing happens. It is deuce, and in short order Federer is broken, and the match is still on.

Djokovic and Federer are opposites in some respects. The mighty Belgradian is arguably the finest returner and all-around counter-puncher in the contemporary game. The maestro of Basel is the greatest attacker since Rod Laver, whom he admires; he has even organized an international team competition, the Laver Cup, now in its successful third season.

But to put it this way scarcely does justice to either man. As it happens, Federer’s attacking style, based on rushing the net and getting the most astonishing volleys into the most improbable spots, while on full display over the past fortnight, transitioned seamlessly into the most gutsy, adrenaline-fueled baseline game, 20, 30 shots per point when needed, with shots down the line and to the chalk-lines as precise and daring as any he has ever made. In particular, he deployed this game against Rafa Nadal, outplaying him at his own preferred hit-the-baselines tactics.

And Djokovic’s “defensive” style is never a matter of waiting out the other fellow until he blinks. The mighty Serb has the uncanny genius of turning a nerve-wracking, lengthy baseline or crosscourt rally into a sudden series of shrewdly placed shots that get his opponent on the wrong foot and allow him to close the point with a winner.

After blown match points, Federer settles down. But there is something missing now, as the games go routinely to the server, 40-15 or so. The game score cannot go beyond 12-12, the All England Club having instituted a new rule that makes use of the tiebreak into an extended fifth set. And Federer has not won tiebreaks lately, the only latelies that can count in such a time and place being the ones this afternoon.

Tennis is a solitary sport, a man alone in the arena — on the court, rather. Doubles is a different game, but even there, the pressure on the single man, when the ball is his to play, is crushing. It was visible in a fantastic doubles final, pitting the French team of Nicolas Mahut and Édouard Roger-Vasselin against the Colombians Juan Cabal and Robert Farah. The French lost in the fifth set after going point for point almost the entire way. A single mistake — or two lost points on service — and you are done.

What if I get it a fraction of a second off the sweet spot? What if I send it out? What if I just can’t … ?

And it happens to very best, all the time, even though they have been playing daily, most of their lives (having begun however young), with the best adversaries or training partners. It is, what? Human nature.

It is the same with the women. In the thrilling ladies’ draw, Serena Williams, as dominant on her side as Federer has been on his, had a magnificent run to the final, and she was expected to win her 23rd Slam. But her opponent in the final was Simona Halep, the tenacious dynamo with the sharpshooter’s groundstrokes — when she is on. And she was on. She subverted Miss Williams’s power game from the first point and kept her off balance and struggling as she won her second in less than an hour, a stunner. “Played her heart out,” was how Serena Williams gracefully put it.

Something like that must have happened on Sunday. Federer kept his serve but could not regain that calm composure that lets a player play his heart out and swing for the stars — or the lines, rather, and for history.

But sports is one activity where the beauty and the skills are, face it, somewhat inverse to the importance of it all. It is only a game — admittedly a lucrative one. We love sports because they are so much fun to play and so exciting to watch, but they are as symbols, rather than as deep substances, of the true facts of life: that we must strive always to do the best we can to do the right thing by our families and countries, which in the end means being the best we can be ourselves. Pro athletes do not save people from disease or burning fires or rebuilt their homes or rehabilitate their health. (Actually, Nadal is a part-time volunteer flood rescuer in Mallorca, and many of the big-time champions are generous philanthropists.) No, sports and their best practitioners are symbols, like poems, that give us the images and words to know what life is all about.

Rudyard Kipling was not, that we know, thinking of tennis when he wrote some of his most famous lines, but the founders of the All England Lawn Tennis and Croquet Club were quite right to inscribe them above their gate, for on their courts takes place a sport that shows us how to win the game of life, if we will try, and how to lose it, too:

If you can meet with triumph and disaster

And treat those two imposters just the same …

Missing two championship points on serve while holding the record for trophies here in the Open era must put those two verses into some perspective — as surely must winning in the tournament’s first-ever tiebreak against such a unique opponent. The two men, at any rate, will likely be hoping for the next opportunity to prove to each other, and to themselves, what they are worth.