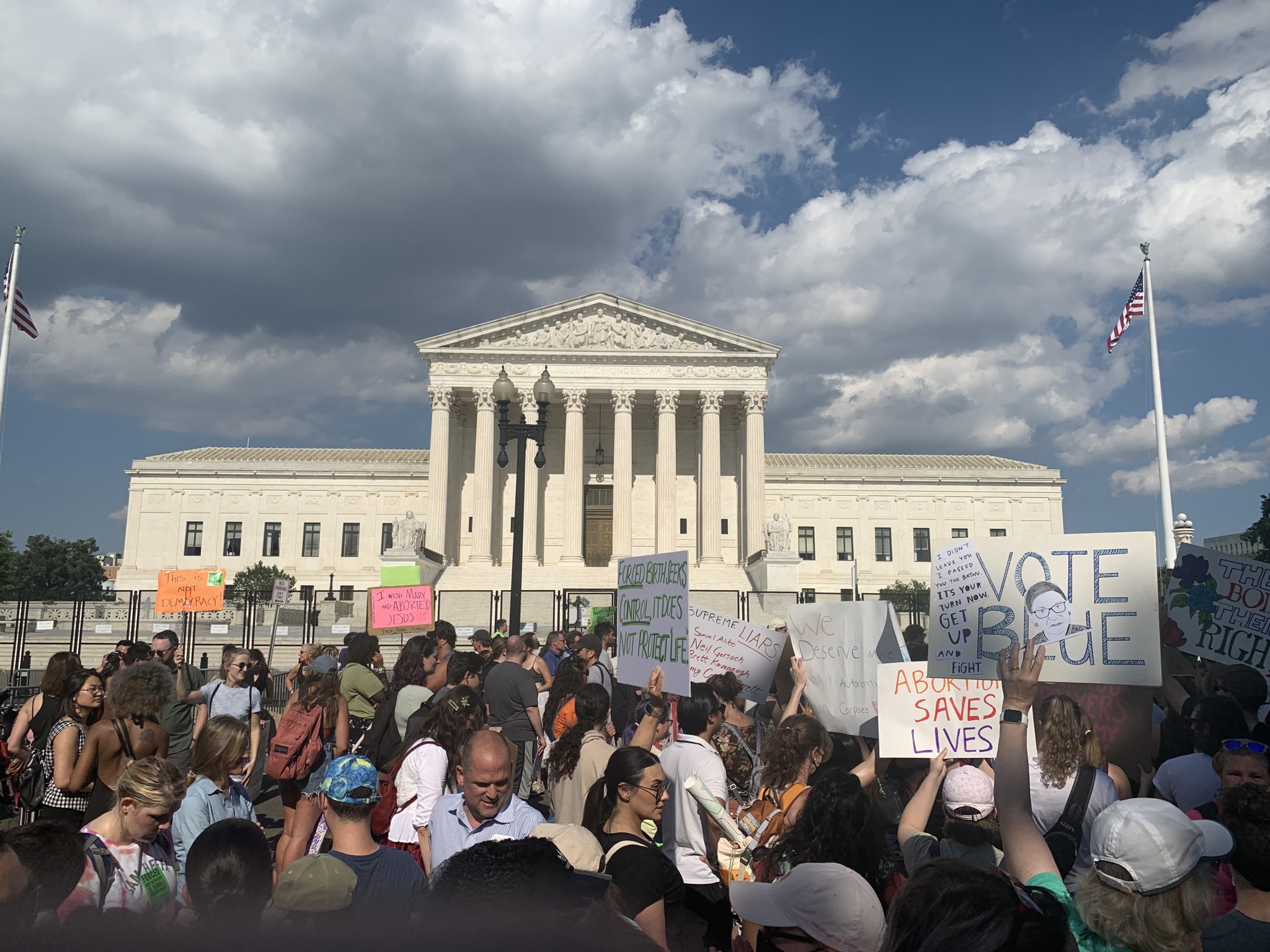 Abortion advocates across the D.C. area have taken to the streets and expressed their outrage over the Supreme Court’s conservative majority decision to overturn Roe v. Wade and Casey v. Planned Parenthood. Throughout the week, protesters have vowed to hold demonstrations outside of homes of the conservative justices, especially outside the home of Clarence Thomas. On Friday, pro-abortion advocates held major demonstrations at Union Station, the Frederick Douglass Memorial Bridge, and in front of the Supreme Court. The demonstrations at Union Station and Frederick Douglass Memorial Bridge attracted hundreds of protesters, while the demonstration in front of the Supreme Court attracted thousands of demonstrators and congressional figures such as California Rep. Maxine Waters and New York Rep. Alexandria Ocasio-Cortez. 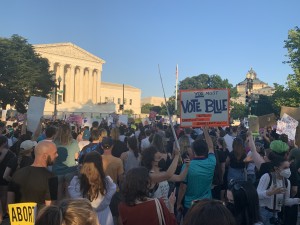 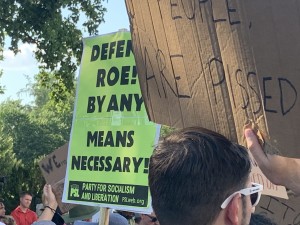 Pro-abortion supporter with sign from the Party for Socialism and Liberation, one of the organizations that distributed signs and information to protesters (Hunter Oswald/The American Spectator)

Members of far-left organizations such as Black Lives Matter, the Party for Socialism and Liberation, the Revolutionary Communist Party, and others spoke outside the Supreme Court and distributed pamphlets on how to perform medication abortions at home. Late Friday evening, a small contingent of Antifa members showed up in front of the Supreme Court proceeded to march from SCOTUS to various metro stations throughout D.C. No violence broke out.

On Saturday, hundreds of protesters returned to the Supreme Court and used similar explicit and emotional rhetoric to that of Friday night. Protesters throughout the day began a wide range of chants such as “My body, my choice,” “Abortion is health care,” and “Abort SCOTUS,” along with more explicit chants directed towards the justices, the GOP, President Joe Biden, and West Virginia Sen. Joe Manchin. Members of organizations such as RiseUp4AbortionRights and NARAL Pro-Choice America went through the crowd giving instructions for how women could perform abortions using the drugs mifepristone and misoprostol. 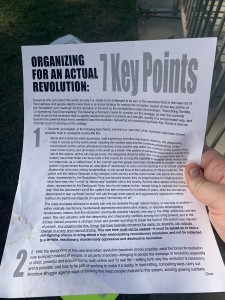 One of the pamphlets being handed out was by the Revolutionary Communist Party and titled “Organizing for an Actual Revolution. 7 Key Points,” which detailed a “roadmap” for revolution against “the capitalist-imperialist ruling class.” 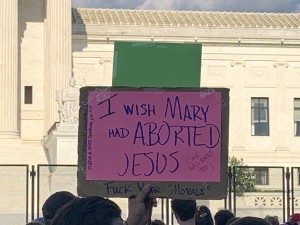 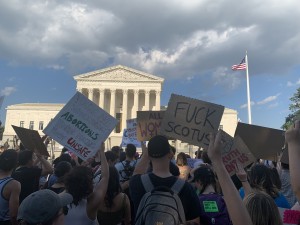 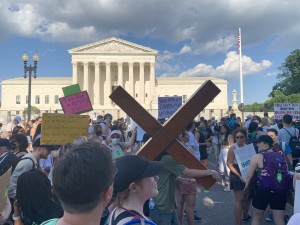 Pro-abortion protesters’ signs carried a wide range of messages, including “Abortion Saves Lives” and “In Our Hands On Our Terms.” As night came, the demonstration peacefully dispersed, and members from the group RiseUp4AbortionRights encouraged everyone to return the next day.

Sunday’s demonstration was smaller than the two previous days, but experienced greater tension as pro-life counter-protesters came to celebrate the end of Roe and Casey. 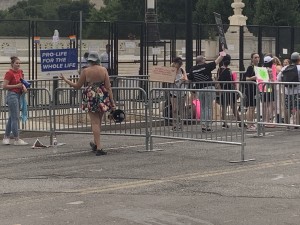 Democrats for Life of America member who chanted “Pro-Choice is a lie” and “Not your body, not your choice” in front of pro-abortion protesters during Sunday afternoon’s protests in front of the Supreme Court (Hunter Oswald/The American Spectator)

Members of Live Action, a pro-life advocacy organization founded by Lila Rose, and the Democrats for Life of America, Democrats who advocate against abortion, came to show their support of the Dobbs decision with signs thanking the justices for upholding the right to life. They chanted, “Pro-choice is a lie” and “Not your body, not your choice.” 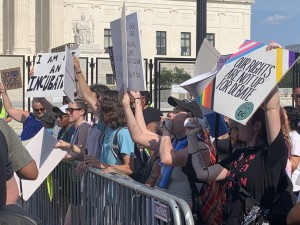 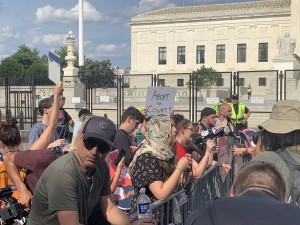 Pro-life members chanting, “Not your body, not your choice,” “Thank you, Thomas,” and “Pro-choice is a lie” as pro-abortion demonstrators yell explicit messages towards them (Hunter Oswald/The American Spectator) 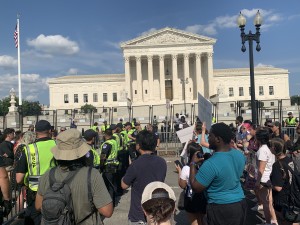 The rhetorical clash between pro-abortion and anti-abortion demonstrators came to a head as one pro-abortion protester shoved a member of Live Action, forcing the police and security to intervene and become a barrier between the two sides. In the afternoon, pro-abortion protesters marched from the Supreme Court to the White House, where they performed a “die-in.” 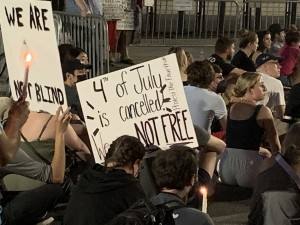 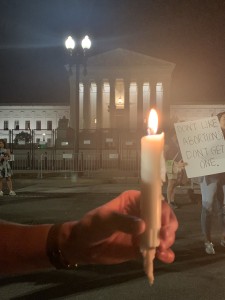 That night, pro-abortion protesters held a candlelight vigil to mourn the end of Roe and Casey, during which many demonstrators began to cry. After the candlelight vigil, the crowd returned to chanting, and the once-solemn crowd became an enraged swarm chanting, “F*** Trump,” along with the names of the conservative justices. As the protest wrapped up, members from RiseUp4AbortionRights, the group that planned the candlelight vigil, announced that during the upcoming week they would march to each justice’s house to protest the Dobbs decision.