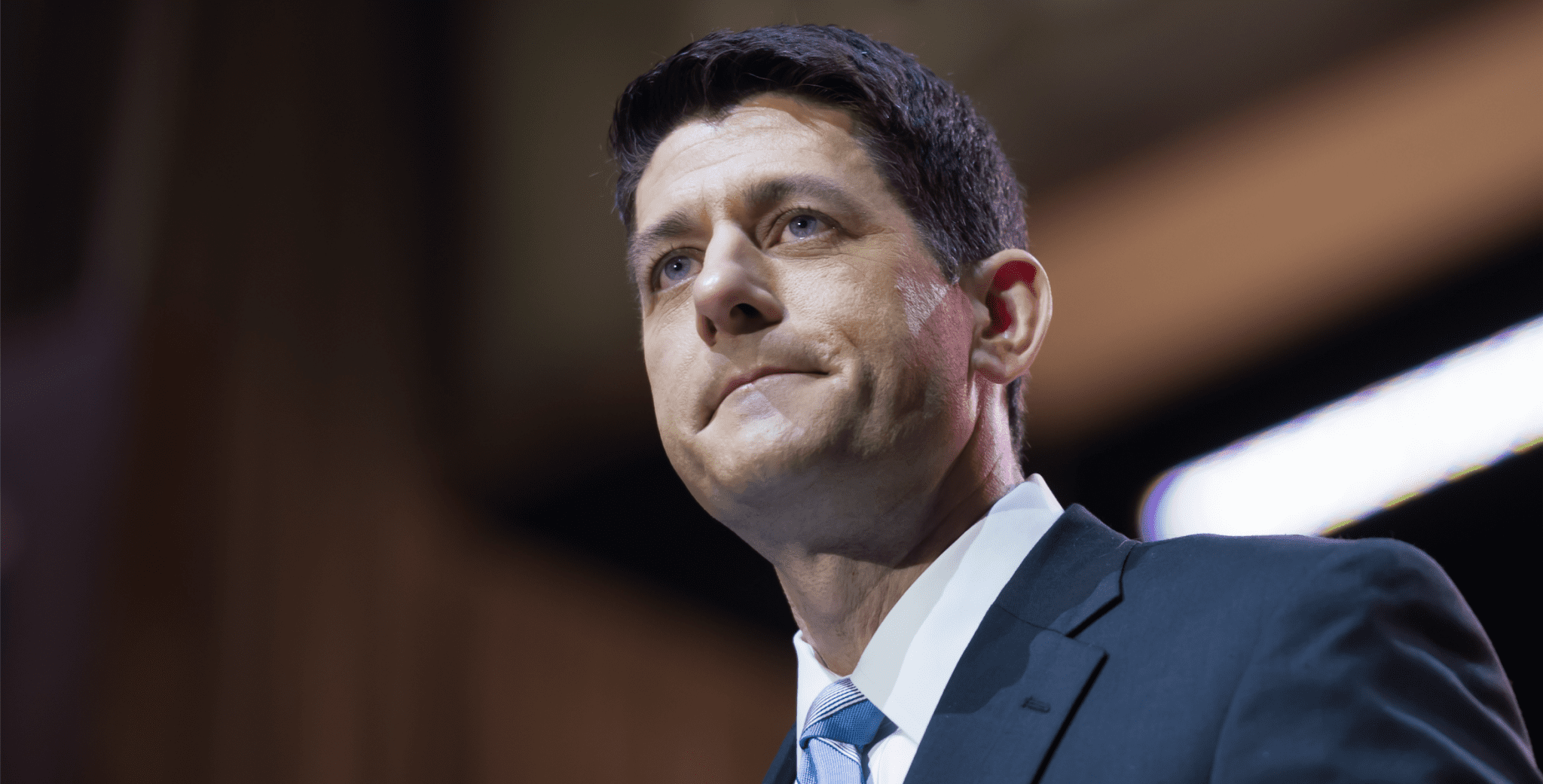 [T]he former speaker could not stand the idea of another two years with the president and saw retirement as an “escape hatch,” in Alberta’s words.

“We’ve gotten so numbed by it all,” Ryan says. “Not in government, but where we live our lives, we have a responsibility to try and rebuild. Don’t call a woman a ‘horse face.’ Don’t cheat on your wife. Don’t cheat on anything. Be a good person. Set a good example.”

Ryan depicts Trump as uneducated about the government.

“I told myself I gotta have a relationship with this guy to help him get his mind right,” Ryan recalls. “Because, I’m telling you, he didn’t know anything about government. … I wanted to scold him all the time.”

Ryan says he sees the presidency getting worse, with Trump determined to govern and campaign on his terms, rejecting calls from other Republicans to moderate his message in 2020.

“Those of us around him really helped to stop him from making bad decisions. All the time,” Ryan says. “We helped him make much better decisions, which were contrary to kind of what his knee-jerk reaction was. Now I think he’s making some of these knee-jerk reactions.”

Ryan, once a rising conservative star, has become a class-A example of the Old Order — as I call it in my own book Swamp Wars: Donald Trump and the New American Populism vs. The Old Order. I defined the Old Order as

… a club of self-selected elitists who see themselves as intellectually and decidedly morally superior to their fellow Americans — particularly today Donald Trump and Trump-supporting Americans.

Amazingly enough, even The New York Times now gets this, with a front page, above-the-fold article by Peter Baker this past Sunday headlined:

In which the Times describes Ryan and his successor, Democrat Speaker Nancy Pelosi, as “the beleaguered defenders of the old order.” As, indeed, Ryan’s remarks to Alberta indicate exactly.

Take a look at those Ryan comments again. They are bristling with the trademark Old Order sense of intellectual and moral superiority. There is Ryan snarking that Trump “didn’t know anything about government. … I wanted to scold him all the time.” Ryan had to be there at the president’s side, you see, “to stop him from making bad decisions.” It never occurs that maybe, just maybe, it is Washington’s Old Order — in which he had now become a central player — that routinely made bad decisions. Which in turn is exactly why millions of Americans voted for Trump in the first place.

The “horse face” comment is a reference to a remark Trump made during the 2016 GOP primary season about his opponent Carly Fiorina. Note Ryan’s unsubtle if doubtless unaware sexist condescension that Fiorina had to be treated not as an equal to the male candidates — whom Trump also attacked in similar terms. When Trump was accused of attacking then-opponent Senator Rand Paul’s looks, Trump said, “I never attacked him on his looks — and, believe me, there’s plenty of subject matter there — that I can tell you.” He also attacked “low-energy Jeb” Bush and later “crooked Hillary.” Which is to say, he treated his opponents across the board, male and female, with straight-out equality, not condescension based on sex.

Then there is Ryan scolding, “Don’t cheat on your wife, ” an apparent snide reference to Trump. But where was Ryan when Bill Clinton was in the White House? Or in 2016 when he suddenly abandoned Trump after the Access Hollywood tape — making possible a potential win by Hillary Clinton, she who was an enabler of her husband’s cheating behavior? Not to mention that Hillary Clinton was accused by Juanita Broaddrick of threatening Broaddrick with silence over an allegation that she was raped by Bill Clinton. Is Ryan suggesting that presidential wife-cheaters with names like Kennedy, Johnson, and Franklin Roosevelt, not to mention the recent allegations surrounding the late Dr. Martin Luther King — who has a national holiday named in his honor — should have their monuments in Washington taken down and the King holiday disappeared? Strangely, Ryan is silent on the subject. Which, of course, is exactly the way the Old Order works — the goal always to protect its own. (And, to be clear: Human beings are imperfect, and so too are those presidents and Dr. King. Whatever their personal foibles, their respective considerable accomplishments should stand on their own, with monuments, statues, and a holiday left alone.)

The real point behind the Ryan criticisms of Trump is that the very bright supply-side economics acolyte who came to Congress 21 years ago slowly morphed over time, precisely as the Times indicates, into a defender of the Washington Old Order. Ryan made himself into a symbol of exactly what the American people have come to detest about that Old Order in the Swamp’s headquarters.

The Times article points to the now recently deceased Ross Perot as the beginning of the Old Order’s woes. Perot, of course, used his status as a famous Texas billionaire to run as an independent third-party candidate in the race between the then-incumbent Republican President George H. W. Bush and Arkansas Gov. Bill Clinton. The billionaire wound up getting 19 percent of the vote, a showing not seen since ex-President Theodore Roosevelt made a third-party bid in 1912.

Back there in 2012, shortly after another Old Order Republican — Mitt Romney — lost the presidency to President Obama, Forbes contributor Ralph Benko wrote a piece in Forbes titled

The End Of The Karl Rove Death Grip Signals A Reagan Renaissance,

in which Benko opened by saying — correctly — this:

Liberals do not grasp the distinction between Ronald Reagan and (either) George Bush. This blind spot creates a massive confusion and hazard to their ambitions. Obama defeated neither the Reagan Narrative nor Team Reagan. Team Bush appropriated, and then marginalized, both. Obama beat Team Bush, not Team Reagan. The implications are huge. …

In an intra-party succession barely noticed by the mainstream media the Bush forces supplanted the Reagan forces within the GOP. Keepers of the Reagan legacy tended to end up at positions of respect and influence within the conservative movement. For example Reagan intimate, counselor, and attorney general Edwin Meese III long has held a prestigious office with the Heritage Foundation, the flagship of the Washington conservative establishment. Even though Meese was a General in the Reagan Revolution, though, his influence on a Bush cohort-dominated GOP — one that chiseled Reagan onto Rushmore while ignoring Reagan’s philosophy — is constrained.

The enormity of (and surprise at) the defeat of Romney is a huge setback — and perhaps fatal — to the Bush Mandarins’ hegemony over the GOP. If so, the potential re-ascendency of the Reagan wing of the GOP will prove very bad news for liberals and excellent news for the Republican Party. The Reagan wing now can resurge. A resurgence already has begun.

And, indeed, that is exactly what happened, with Donald Trump leading the resurgence inside the GOP of a Reagan-style rebellion against an exhausted GOP Old Order Establishment.

At the time, Paul Ryan was included in the Benko article as a future Reagan-style star. Yet in fact, in reality, as Ryan went back to his House job after that failed venture as the moderate Romney’s running mate, Ryan wound up being entangled in the Old Order as an emergency draft to replace the decidedly Old Order GOP Speaker John Boehner when Boehner finally resigned both his speakership and his House seat. Ryan was reluctant to take the job, but finally did so as a “unifying candidate.” It was downhill into the depths of the Old Order from there. Yes, for sure, he got those Trump tax cuts through. But bit by bit, as Trump and his Reagan-style insurgency rose through 2016 and then entered the White House, Ryan became more and more of an Old Order symbol, simply a younger version of it: what Ralph Benko had earlier in that piece labeled a “Bush mandarin.”

It’s too bad. But it seems clear in retrospect that Paul Ryan was so up to his eyes in Old Order politics that he simply didn’t see the Trump Revolution coming. And when he finally had to accept electoral reality, he was, at best, reluctant. As he said to Alberta:

I told myself I gotta have a relationship with this guy to help him get his mind right.

In the end, it was the president who had his mind right about the realities of the Old Order and the need to fight it, while it was Paul Ryan, as the Times accurately says, who went from being a rising conservative star to one of those “beleaguered defenders of the old order.”

The irony doesn’t get any thicker than that.

Jeffrey Lord
Follow Their Stories:
View More
Jeffrey Lord, a contributing editor to The American Spectator, is a former aide to Ronald Reagan and Jack Kemp. An author and former CNN commentator, he writes from Pennsylvania at jlpa1@aol.com. His new book, Swamp Wars: Donald Trump and The New American Populism vs. The Old Order, is now out from Bombardier Books.
Most Popular
1
Daily Folios and Consecutive Sentences
On Trump, Kanye, Biscuit, Jews, and Dinners
by Dov Fischer