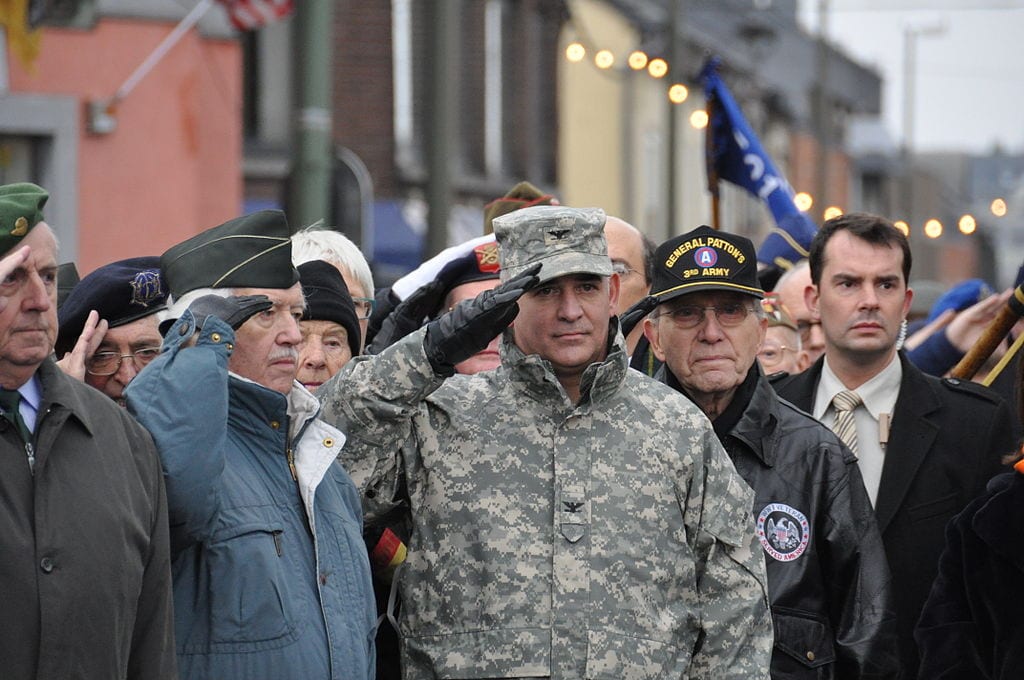 Seventy-five years ago today, 200,000 German soldiers launched a surprise attack through the Ardennes Forest and created a bulge in the Allied front lines in Belgium. At the salient’s heart was the town of Bastogne from which roads led to the North Sea and the major Allied supply port of Antwerp.

The 101st Airborne Division hastily established a defensive perimeter around the town. But it was questionable how long the Americans could resist the massive enemy onslaught. It was feared that a German breakthrough at Bastogne would lead to their capturing Antwerp and cutting the Allied supply chain, which quite possibly could turn the tide of the war in Europe.

On December 19, 1944, Supreme Allied Commander Dwight Eisenhower convened an emergency meeting of his generals. The prevailing attitude was one of glum astonishment at this sudden and grave development.

But, in sharp contrast to the cautious and defensive mindset of the other generals, the commander of the American Third Army, George S. Patton, exuded confidence and optimism.

Before the assembled generals, he pointed at the bulge on the situation map and proclaimed, “The Kraut’s stuck his head in a meat grinder, and this time I’ve got the handle!”

Where others saw only disaster, Patton recognized the attack as an opportunity to smash the Wehrmacht. He then laid out his plan for immediately redeploying his army toward Bastogne to relieve the besieged airborne troops while simultaneously cutting off and destroying the Germans. Subsequently, just as he had described, his army attacked and routed the Nazis in what became known as the Battle of the Bulge.

I couldn’t help but think of Patton’s bold pronouncement  as I watched the Democrat majority on the House Judiciary Committee cobble together their fatuous and flimsy articles of impeachment against President Trump. If, as appears certain, the House Democrat majority actually approves these specious articles, they will be handing the Republicans an electoral opportunity of historic proportions. Or, to paraphrase Patton, the Democrats will have stuck their heads in a meat grinder and dared the president and his allies to start cranking the handle.

The Democrats allege that Trump must be impeached because he abused the power of his office by threatening to withhold military aid from Ukraine unless that country helped investigate possible corruption by former Vice President Joe Biden, a potential political rival. The House Republicans have exposed the factual weakness of this charge by amply demonstrating that there was no such quid pro quo.

Now it is recognized that neither this claim nor the equally fatuous charge that Trump has obstructed Congress by asserting executive privilege will result in the necessary two-thirds removal vote by the Senate. Trump will win.

But while the “no quid pro quo” defense will be successful, it is nevertheless flawed and, even worse, lacking in aggression. In the White House transcript of the president’s telephone conference with Ukraine President Volodymyr Zelensky, Trump is quoted as saying, “The other thing, there’s a lot of talk about Biden’s son, that Biden stopped the prosecution and a lot of people want to find out about that so whatever you can do with the attorney general would be great. Biden went around bragging that he stopped the prosecution so if you can look into it.… It sounds horrible to me.”

Though Trump contends that his conversation with Zelensky was “perfect,” the foregoing statement proves that he, speaking as the official who controlled whether or not Ukraine would receive aid, sought that country’s assistance in investigating the Bidens. The fact that he made no mention of aid and the lack of a step-by-step quid pro quo exchange are really beside the point.

Instead of trying to evade the clear import of the president’s words, his defenders should embrace his request of Zelensky and use it as the predicate for laying out in painful detail why the request was not only proper but also made in the manifest best interests of the people of the United States.

It is already known that Biden’s wastrel son was paid between $50,000 to $83,000 per month to serve on the board of Burisma Holdings, a company that was under investigation by Ukraine’s attorney general. It is also conclusively established by Biden’s own ill-advised and dim-witted televised boast that he got that same prosecutor fired by threatening to withhold $1 billion in U.S. foreign aid.

According to Secret Empires: How the American Political Class Hides Corruption and Enriches Family and Friends, by Peter Schweizer, in the last days of the Obama administration, Vice President Biden made a farewell trip to Ukraine, where he had served as the administration’s point person. It was then that Ukraine announced that it would halt its investigation into Burisma Holdings regarding the loss of $1.8 billion in U.S. foreign aid. Was this massive theft connected with Hunter Biden’s role on Burisma’s board of directors and Joe Biden’s demand that the investigating attorney general be fired?

Similarly, ZeroHedge recently published “The Plundering of Ukraine by Corrupt American Democrats.” This explosive article is based on an interview of Oleg Tsarev, a four-term member of Ukraine’s parliament and presidential candidate. According to Tsarev, shortly after Trump’s election, the United States began to investigate the allocation of $3 billion in foreign aid to Ukraine. It had been dispensed in annual $1 billion installments in 2014, 2015, and 2016, and a substantial portion of those funds have gone missing.

This is what we in law enforcement used to call a promising lead. So, if the Burisma–Biden thread gets pulled, what other parts of the Democrats’ adventures in Ukraine will unravel?

On that basis, Trump’s defense should emphasize that, even if the president requested Ukraine’s help, is he to be impeached for trying to find out whether or not the former vice president was bought and paid for by means of a corrupt bargain between Biden and his son, on the one hand, and Burisma Holdings, on the other?

Moreover, is Biden to be immune from investigation because he is a candidate for the Democrat presidential nomination? And isn’t the president legally obligated to get to the bottom of allegations of such corrupt behavior? In short, is he to be impeached for doing his constitutional duty to faithfully execute our laws?

From that standpoint, the Democrats’ impeachment efforts can fairly be characterized as a desperate attempt to head off a fully justified criminal investigation to determine whether or not Burisma Holdings purchased Joe Biden’s protection from prosecution. Why are the Democrats doing all in their power to block such an investigation? What are they afraid of, and what are they trying to hide? Are they motivated solely by a desire to save Biden’s candidacy? Or are they trying to keep Trump from exposing not only Biden family corruption but also that of other Democrat  “leading functionaries” as well?

What happened to our missing billions in foreign aid and Biden’s role in the firing of the prosecutor investigating Burisma Holdings are subjects of vital national interest warranting full and thorough investigation. And, if getting to the bottom of these issues would be advanced by help from the Ukrainians, so be it. President Trump’s request for assistance was absolutely legal, ethical, proper, and mandated by what is known so far. That should be the primary line of attack against impeachment.

In short, the White House and the Republicans should welcome impeachment as the gift that it is: the perfect predicate to expose the full range of the Democrats’ corruption and hypocrisy.

So let the Democrats jam their heads in the impeachment meat grinder. Once they do, the president and his allies need to summon their inner Patton and start cranking the handle and not stop until election day 2020, when they will ride to victory on a tidal wave of Democrat political blood.