The Art of Resistance: My Four Years in the French Underground

There’s a mini-trend just now in the book publishing biz. It seems to have dawned simultaneously on many 95-plus year-old veterans of World War II that living memory of that huge and horrific war is about to leave the planet totally. That war will have ended 75 years ago this September. So just a little arithmetic tells us how old any living World War II veteran must be. Many of those who were involved in significant ways in important events in the war have engaged ghostwriters to help tell their stories. Some have even written books themselves. Their motivation seems to be a wish to add to the historical record of the biggest war of the most war-plagued and deadly century in history.

Many of these volumes are quite fine. They tell the stories of brave and selfless young patriots who did exceptional things when the times required them, and they also tell us much — up close and personal — about how the war was experienced by those obliged to fight it. I’ve reviewed a couple of these for The American Spectator. A good example of the form is Never Call Me a Hero. It tells the story of N. Jack “Dusty” Kleiss, who flew his Dauntless dive-bomber in the pivotal Battle of Midway and scored bomb hits on the Japanese carriers Kaga and Hiryu and the cruiser Nikuma. The Imperial Japanese Navy never recovered from the loss of carriers, planes, and seasoned pilots they suffered during this pivotal battle. Kleiss went on to a successful career in the Navy, retiring at the rank of captain, and then went into industry after his Navy days.

Others among these volumes are less worthy of readers’ attention. Many are basically magazine articles puffed up and padded out to make them book length. Most of these storytellers are honest. But in some cases a combination of unreliable memory in the very senior years and the hard-to-resist tendency of personal memoirists to gild their own lily a bit have allowed fiction to seep into their narrations. A few of the advanced reading copies of books in this category sent to me recently by publishers contain elements that simply aren’t believable. All respect due to these aging patriots, but book-buying fans of this genre should exercise caution.

The Art of Resistance, written by 98-year-old retired Bard College literature professor Justus Rosenberg (now 99) is neither padded out, nor in my estimation dishonest. It tells the story of a courageous young Jewish man who, thrust into the hell of Nazi-dominated Europe, took the high and very dangerous road of resistance. Not everyone did so in that dark and morally complex time — morally complex for those occupied, who were faced with three choices: collaborate, resist, or keep quiet and try to wait out the war. The first two of these approaches carried potentially serious downsides if one were caught or if the wrong side won the war. 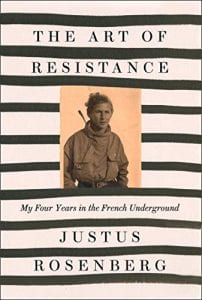 Young Justus (pronounced Yoo-stice) was first subjected to Nazi horrors as a 16-year-old in the free-city of Danzig, now Gdańsk, in Poland. There he witnessed Jews being roughed up and their businesses attacked both by brown shirts and mobs of anti-Semitic civilians. Fearing for his safety, his family packed him off to Paris, where he could continue his education. That was a good idea at the time, but not as good after Germany defeated and occupied France (or at least half of it) in the spring of 1940. Young Justus found himself without money or prospects and in a country where his Jewishness put his life in danger. He soon found himself working for a resistance organization, first with a group in Marseille called the Emergency Rescue Committee, and later with a series of different organizations in different cities. He served in various roles, from courier (not as bland and harmless as it may sound, considering the messages he carried), to spy, to resistance fighter engaging in real combat. In 1944, when the Allies were pushing the Wehrmacht across France, he was attached to the U.S. Army, where he did intelligence work and acted as translator for the troops on the march as they pushed the Western front ever eastward. It was somewhat like consulting work, only most consultants don’t have to worry about being shot, captured, or blown up.

The story of Justus’ war is told in clear prose, and Rosenberg nicely blends the exploits of the central character and his resistance-mates with the larger story of the progression of the war. Neither the big nor the little picture is ignored. The story has the pace and suspense of a good thriller novel, except the events actually took place. The expression “page-turner” is overworked in reviews. This book is. The 273 pages of text go by quickly.

The book does present some puzzlements. Rosenberg, boy and man, is clearly an intelligent fellow. But there is, to use the baseball expression, a hole or two in his swing. Rosenberg’s postwar career as an academic and intellectual may suggest why: while he had no trouble spotting the evil of Nazism, he seems blind to the fact that communism, of the Soviet variety or later forms, is just as evil and murderous. There are hints through the book that Rosenberg has an inclination to the political left, or at least is sympathetic to it, no matter how many times its variations and permutations have been tried and have invariably led to soul-strangling poverty and tyranny. In taking stock after the war, Rosenberg makes this remarkable statement:

Who knew what direction the world would take: Soviet-style communism or American-style capitalism? It was obvious to everyone that the alliance between the United States and the Soviet Union would not survive the peace and that conflict between the two ideologies was inevitable…. I was not particularly interested in choosing sides between the two ideologies. My political beliefs, which were well formed even at this stage of life, were such that I knew I could never be fully satisfied with either system.

Wow. This would be naïve even for the 24-year-old that Rosenberg was at war’s end. After all, even then the world knew that the Soviet Union was a totalitarian dictatorship presided over by a murderous Joseph Stalin (though the New York Times was loath to admit this). Life was as cheap and precarious in the USSR as it had been wherever Nazis were in charge. But to repeat this after more than a half century, when we have chapter and verse on the show trials, the purges, the starving of Ukrainian peasants, the gulags, the “disappearings” in the middle of the night, often followed by a bullet in the back of the head in the basement of the Lubyanka, that statement is now absolutely stunning. But as we have learned, the best place left to find Marxists, and people who’ve just not seen through Marxism’s flaws, is in the faculty lounges of Western universities, where Rosenberg spent his working years after earning a Ph.D. from the University of Cincinnati.

At least Rosenberg correctly parsed one of the two great political evils of our century, and when he was immersed in its horrors, he risked all to help defeat it. He has received many well-deserved honors for his important and dangerous service. Would he have resisted Stalin if he had come up elsewhere? We’ll never know. But the story of his and France’s fight to expel their Nazi oppressors is well told in The Art of Resistance. One and three-quarters thumbs up.