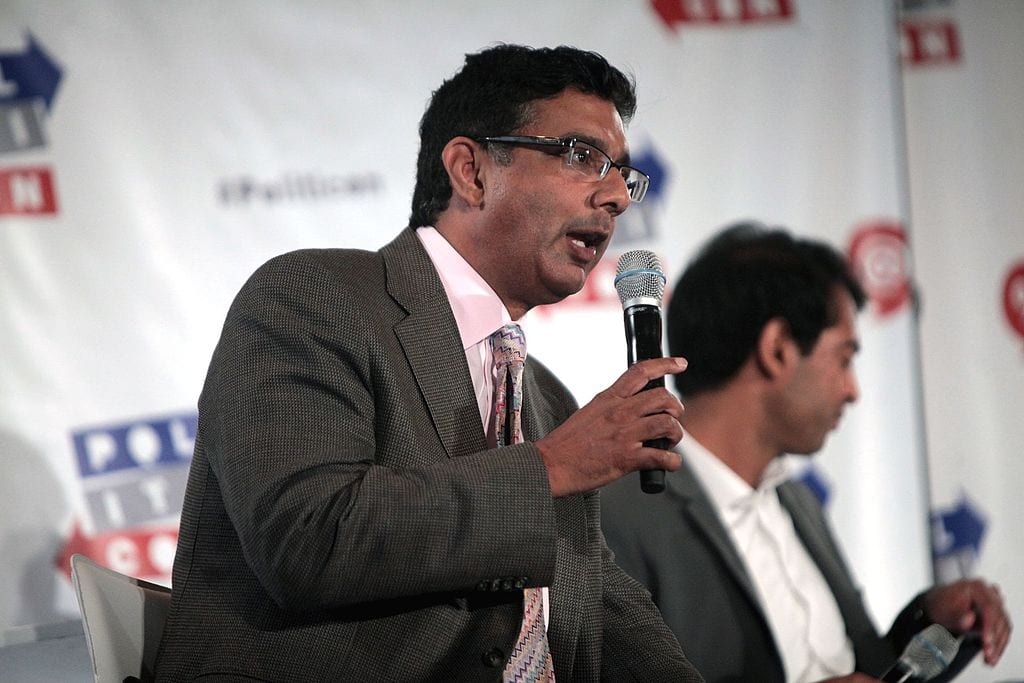 Donald Trump pardoned bestselling author Dinesh D’Souza on Thursday for campaign finance violations. Now how about pardoning him for all of those prostitutes he killed at truck stops throughout the Southwest?

Pardon me for coming to a false assumption about Dinesh D’Souza’s crimes. I watched MSNBC Thursday morning. I’m quite impressionable. The impulse to peruse Twitter to discover what horrible transgressions this villain committed also overcame me. The Twittericans described an absolutely vile criminal — the type whose mug on a “most wanted” poster scares children — without really exploring the crime he committed.

“Dinesh D’Souza is a racist piece of s***,” Mother Jones scribe Timothy Murphy informed, “and it’s worth keeping in mind that he was pardoned because of that, not in spite of it.” A Twitterican named Kaivan Shroff, who boasts laboring for Hillary for America on his résumé, points out: “Dinesh D’Souza is an immigrant who has commit[t]ed more felonies than all of DREAMers combined, but he made illegal campaign contributions to the GOP so, of course, Trump wants to pardon him while ruining the lives of smart, hardworking, millennials brought here by their parents.” Writer Steven Beschloss explained, “My god, Trump’s hatred of America’s first black president is bottomless. Pardoning the conspiracy mongering, Obama hating Dinesh D’Souza is yet another sign Trump will do anything to express his virulent hostility.”

It turns out the feds convicted D’Souza of egregious offenses of generosity. He gave an old friend running for U.S. Senate more money than the government says subjects citizens should donate. With apologies to Officer Obie, the man classed on Twitter and MSNBC with mother-rapers, father-stabbers, and father-rapers fits in more with those passengers in the red VW microbus who illegally dumped garbage on Thanksgiving.

D’Souza provided illegal donations totaling $20,000 through intermediaries to New York Republican Wendy Long, who lost the fundraising race 40 to 1 and the actual race by 3 to 1 to Senator Kirsten Gillibrand. The court finds the defendant guilty of being a good friend!

In other news, cops in Stapleton, Colorado, raided an illegal lemonade stand last weekend operated by a four- and six-year-old looking to funnel profits to Compassion International.

Will President Trump pardon them next to send a thinly-veiled message to Paul Manafort, Michael Cohen, and other former associates facing charges?

Nobody, save for incumbents, views donating too much money to a quixotic political campaign as a crime on par with punting dogs or rolling trick-or-treaters for their Halloween sacks. D’Souza committed an offense against the political class, and, unsurprisingly, the political class used the law to hammer him. His unmatched skills as a debater, reputation as a minority who does not know his political place, and persistence as a thorn in the side of the administration who sicced prosecutors on him all put a target on his back.

The focus on the politics of the man pardoned buttresses the sense that a politicized use of the law muzzled, albeit temporarily, the outspoken critic of the past administration. Like the prosecutors, D’Souza’s social-media detractors fixate on not the trifling “crimes” D’Souza committed but his status as a “racist piece of s[***]” and his pardoner’s “hatred of America’s first black president.”

Are these now felonies, too?

D’Souza undoubtedly broke the law. But the law is guilty of something far worse.

In the last election cycle, Hillary Clinton paid a law firm to pay a political consulting firm to pay a retired former agent — aren’t campaign finance laws supposed to assure transparency?  — to compile opposition research against Donald Trump that partisans, many of whom knew better, restyled as an intelligence “dossier.” At the same time, her political allies in the administration in which she once served used this manufactured “dossier” as justification to weaponize the intelligence apparatus. Atop of these institutional hurdles, Trump faced a hostile, unprecedentedly partisan media that essentially gave a massive in-kind contribution to his opponent’s campaign that dwarfs the amount D’Souza gave Ms. Long-shot.

Campaign finance laws rig elections to help incumbents, candidates favored by the press, and, alas, ones devious enough to employ the power of the state to thwart opponents. Money, which challengers can raise more effectively from one committed donor than from many fat cats giving token amounts to maintain influence, can equal the playing field.

Donald Trump pardoning D’Souza gives a symbolic middle finger to unjust, unconstitutional laws that limit political speech. A more substantive approach requires the president to pursue the repeal of these selectively enforced laws that run counter to the First Amendment. Perhaps the bench he helps stock beats him to the punch here.

Yes, pardoning Dinesh D’Souza risks him becoming the one-man Bonnie & Clyde of campaign-finance criminals (a vicious lot), serially gifting to the candidates of his choice with wanton indifference to McCain-Feingold. Would that really be so terrible?