A male in his twenties, identifying himself as Palestinian, jumped over a seat barrier and charged the stage at the Lincoln Square Synagogue in Manhattan Thursday evening during an event featuring Israeli minorities voicing support for the Jewish state, according to attendees.

In video obtained by the Haym Salomon Center showing the final few seconds of the incident, the alleged assailant can be heard cursing in Arabic and then backing off as he approaches the stage and security overwhelms him.

“I was scared and shocked when I heard this man shouting, cursing and jumping over seats as he rushed toward the stage,” explained Jonathan Elkhoury. “I immediately saw Mohammad Kabiya running to stand in front and protect Bassem [Eid] in order to make sure no one would come close and harm him.”

Elkoury, Kabiya and Eid are Christian, Muslim-Bedouin and Muslim-Palestinian, respectively, who have served in the Israel Defense Forces and are currently on a U.S. speaking tour with the organization Reservists on Duty (RoD). For the past two weeks, these men, joined by Dema Taya, an Arab-Israeli Muslim woman who also served in the IDF, have traveled to 12 different cities, speaking about being minorities in Israel. (Corrrection, Nov. 1: Dema Taya and Bassem Eid did not serve in the IDF. They are Arab-Israelis who volunteer their time to express support for Israel.) 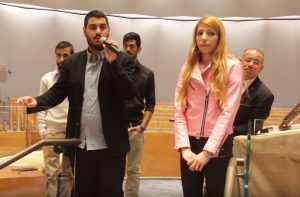 According to Elkhoury, the individual who charged the speakers was cursing in Arabic, “calling us ‘rats who sold our souls’ and ‘Arab-Jewish’ (a pejorative), and calling our mothers prostitutes.”

Approximately ten protesters were removed by security and escorted off the premises by New York City police. Witnesses claim that an anti-terrorism unit also arrived on the scene, which NYPD will neither confirm nor deny.

In an email to the Haym Salomon Center, NYPD would say only that “there was a 911 call for an assault in progress. When police arrived, they determined that there was a dispute between two individuals. A complaint report for harassment was taken at the scene.”

Amit Deri, founder of RoD, expressed dismay that the protesters, especially the individual who charged the stage, were not arrested.

“This was a private event, held in a private facility. These people didn’t want to engage in any dialogue, they just wanted to disrupt our event and intimidate the attendees. Tonight, these people are free to interrupt or even shut down any other pro-Israel speakers or Jewish events. I don’t understand why these anti-Semites are free.”

“Nobody will deter us from speaking the truth about Israel. Those who try to shut us down will be met with a resistance and determination they cannot fathom. We have truth on our side, and that is what scares them the most.”

On Tuesday night a woman was arrested at the University of Minnesota for trying to shut down an RoD event sponsored by a student group.

In May, at the University of California, Irvine, IDF reservists speaking on behalf of RoD had to be escorted out by police following a violent protest by anti-Israel students. The Jewish, Christian, and Muslim IDF delegation documented the violence on video, using smartphone cameras. This ultimately led to the anti-Israel group Students for Justice in Palestine being placed on disciplinary probation for two academic years.