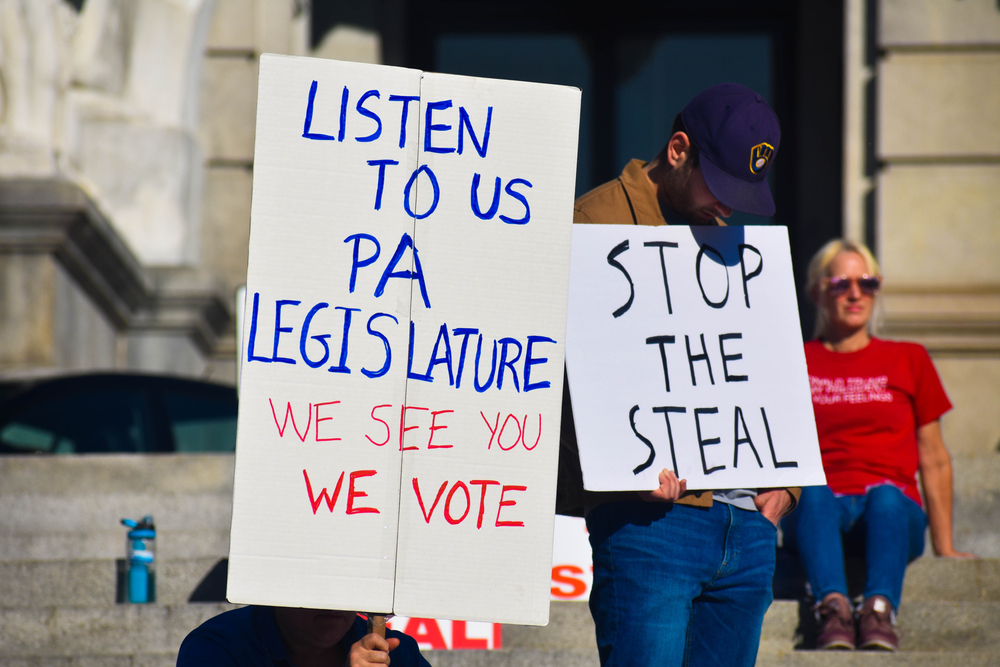 Unless you can. Pennsylvania’s Democrat lieutenant governor and U.S. Senate candidate in 2022, one John Fetterman, just looked those renegade Texas legislators hiding in Washington in the eye and made up a fairy tale. And a big fairy tale at that.

Here’s the headline from the Pittsburgh Post-Gazette:

The story, written by reporter Julian Routh, says this:

Speaking to state House Democrats in Texas who recently fled their state to stall GOP voting legislation that they said amounted to voter suppression, Pennsylvania Lt. Gov. John Fetterman said Friday that the idea of voter fraud is a “fiction” and is being used by Republicans to disguise suppressive laws….

Universal voter ID is “insidious and unnecessary,” Mr. Fetterman said, because it would risk disenfranchising thousands of Pennsylvania residents who don’t have access to ID at any given time — and because there’s no such thing as voter fraud, he added.

Got that? According to Lt. Gov. Fetterman, there’s no such thing as voter fraud in Pennsylvania. It’s all a “fiction” made up by Pennsylvania Republicans.

Wow. A more brazen untruth would be hard to find.

Here at The American Spectator, in this very space — not to mention elsewhere — the voter fraud of Pennsylvania Democrats over the years has been chronicled. Since the lieutenant governor has no intention of telling the truth, you will find the truth right here. A sampling is below — and this is just a sampling:

May 2020. The headline in the Philadelphia Inquirer:

July 2020. The headline in the Philadelphia Inquirer:

A former Pa. congressman caught in 1970s Abscam sting has been indicted again — this time for election fraud

Prosecutors said Michael “Ozzie” Myers, now working as a campaign consultant, paid a South Philadelphia judge of elections to fraudulently add votes for candidates who had hired him for their races between 2014 and 2016.

November, 2018: This was the headline in Patch out of Delaware County, Pennsylvania — suburban Philadelphia:

A Delaware County man who admitted to authorities that he forged signatures of deceased people on absentee ballots is now facing voter fraud charges, according to authorities.

Maxwell is facing charges of forgery, tampering with records, conspiracy, and violations of the elections code, all first-degree misdemeanor charges.

October 2017: From the attorney general of Pennsylvania:

The news release from the attorney general said, in part, this:

“We’re here to announce charges against four individuals for interfering with a free and fair election for a seat in the Pennsylvania House of Representatives,” Attorney General Shapiro said at a press conference today. “But also to draw a clear line — ahead of next week’s election and during a time when the integrity of our country’s elections are under question — the sanctity of ‘one person, one vote’ must be and will be upheld here in Pennsylvania.” …

The four election workers comprised the election board at poll 43-7. They were charged with violating state laws that regulate elections, including frauds by election officers, interference with primaries and elections, prohibiting duress and intimidation of voters and interference with the free exercise of elective franchise, tampering with public records, conspiracy, and other offenses.

The story by Brent Scher reports,

Three election officials in Philadelphia pleaded guilty on Wednesday to charges of violating the commonwealth’s election laws, according to the Philadelphia Inquirer.

The three officials, Robin Trainor, Laura Murtaugh, and Cheryl Ali avoided felony fraud charges with the plea deal, which got them off with just one year of probation and the loss of their voting privileges for four years.

The charges stem from illegal election activity committed by the officials during elections in 2014 and 2015. Two of the election officials, Trainor and Murtaugh, worked together to register multiple illegitimate votes during a primary election last year.

October 2008: Right here, in this space in The American Spectator I covered the story of a press conference in the Pennsylvania State Capitol in Harrisburg. The headline:

My report said, in part, this:

A retired Pennsylvania Supreme Court Justice says that she is “not confident we can get a fair election” in the state come November.

Gleason was even more explicit:

“Between March 23rd and October 1st, various groups, including ACORN, submitted over 252,595 registrations to the Philadelphia County Election Board” with 57, 435 rejected for faulty information. “Most of these registrations were submitted by ACORN, and rejected due to fake social security numbers, incorrect dates of birth, clearly fraudulent signatures, addresses that do not exist, and duplicate registrations. In one case, a man was registered to vote more than 15 times since the Primary election.”

Marsico added that he believed the attempted fraud was being perpetrated in smaller Pennsylvania counties as well, counties where the resources to investigate simply don’t exist.

And then there was the classic 1994 special election for a Philadelphia State Senate seat vacancy. Here’s the headline from the New York Times:

This jewel of story on the reality of voter fraud in Pennsylvania begins this way, as reported by Michael Decourcy Hinds (bold print for emphasis supplied):

In many instances, according to Republicans who testified during a four-day civil trial last week, Democratic campaign workers forged absentee ballots. On many of the ballots, they used the names of people who were living in Puerto Rico or serving time in prison, and in one case, the voter had been dead for some time.

Now, after all of these factual examples — mere samples of voter fraud in Pennsylvania — let’s go back to what Democratic U.S. Senate candidate and current Lt. Gov. John Fetterman said to those renegade Texas Democrat legislators busy spreading COVID-19 while they hid out in Washington to prevent a vote on election reform and integrity in Texas. Said Fetterman, again per the Pittsburgh Post-Gazette:

The story, again, says this (bold print for emphasis supplied):

Speaking to state House Democrats in Texas who recently fled their state to stall GOP voting legislation that they said amounted to voter suppression, Pennsylvania Lt. Gov. John Fetterman said Friday that the idea of voter fraud is a “fiction” and is being used by Republicans to disguise suppressive laws….

Universal voter ID is “insidious and unnecessary,” Mr. Fetterman said, because it would risk disenfranchising thousands of Pennsylvania residents who don’t have access to ID at any given time — and because there’s no such thing as voter fraud, he added.

Got that? According to Lt. Gov. Fetterman, there’s no such thing as voter fraud in Pennsylvania.

Which leaves only two possibilities about Mr. Fetterman:

My thought? The lieutenant governor is not an ignorant man.

As the saying goes, we report. You decide.